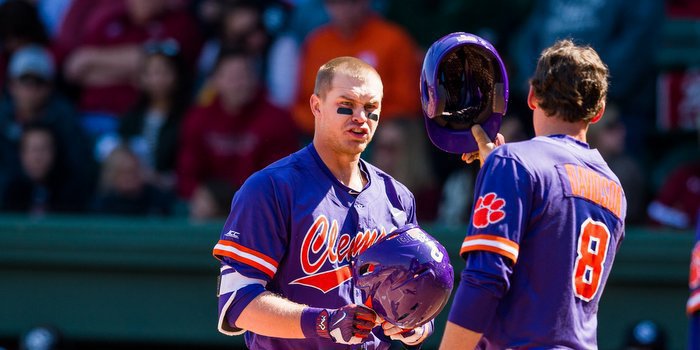 GREENVILLE – Trailing 5-2 and heading into the last nine outs of Saturday’s game, Monte Lee and Clemson had South Carolina right where they wanted them.

No. 12 Clemson overcame a 5-2 deficit, scoring six runs in the final three innings, and held off a furious South Carolina rally in the bottom of the ninth in defeating the No. 4 Gamecocks 8-7 at Fluor Field Saturday afternoon.

The game, played in front of a Flour Field-record crowd of 7,460, evened the Reedy River Rivalry series at one game apiece. The series concludes Sunday at 1:30 p.m., in Columbia, S.C., on SEC Network. Clemson improves to 7-3 on the season, and South Carolina falls to 7-4.

Ryley Gilliam (1-0) pitched the final 2.0 innings to record the win, while Reed Scott (0-1) suffered the loss.

“Well, we had it all the way. Whew. What a great game,” Lee said after the game. “Very, very pleased with my team to come back the way that we did. Down 5-2 going into the seventh inning with nine outs to go, and our guys started to put together some really good at-bats. We started out hot, swinging the bats really well, and then Crowe being Crowe changed his gameplan and started mixing his pitches a lot more and we didn't make adjustments off of him from about the third inning on. Then there at the end we started figuring it out a little bit and you could see that momentum starting to turn in our dugout.

“Overall it wasn't a pretty game, and I'm pleased with how we competed and the level of toughness that we showed. We got down, and we were getting our butts whipped there early in the game, and we started accumulating good at-bats and came back to win the game.”

Clemson jumped on Crowe early. Logan Davidson led off with a single to right on the game’s first pitch. Reed Rohlman flied to right for the first out, but Beer smacked a 1-0 pitch from Crowe well over the fence in right for his third homer of the season. The blast was estimated at 425 feet, and Clemson held an early 2-0 lead.

A triple off the Green Monster in left, a walk and sharp single to left by Jonah Bride scored a single run in the bottom of the inning, and the Tigers led 2-1 after the first frame.

Both teams missed on scoring opportunities over the next three innings, but the Gamecocks used a Clemson miscue to score a run in the fourth. Alex Destino led off the inning with a single to center and moved to second on catcher’s interference by Robert Jolly. A single off of Krall’s legs loaded the bases with no out, and T.J. Hopkins’ sacrifice fly to center scored Destino to tie the score at 2-2.

The Gamecocks broke the deadlock in the bottom of the fifth. Jacob Olson launched a triple off the wall in center, and Bride followed with a homer over the wall in left and South Carolina led 4-2 after five.

Krall’s day was done after five. He gave up eight hits, four runs (three earned), walked one and struck out four 84 pitches. He was replaced by Patrick Andrews to start the sixth. Andrews gave up a leadoff double to Taylor, and Blair’s bouncer to second was thrown in the dirt by Byrd, scoring Taylor for a 5-2 lead.

The Tigers finally chased Crowe in the top of the seventh. Jolly led off the inning with a walk, and Andrew Cox launched a shot that bounced off the wall in center. Jolly was running on the swing, and he scored ahead of the throw to the plate to make it 5-3 South Carolina. Crowe’s day was done, and he was replaced by Colie Bowers.

Bowers gave up a line single to left to Jackson, and the Tigers had runners at the corners with nobody out. Byrd hit a sacrifice fly to score Cox. Bowers got a strikeout and easy fly ball to end the threat as South Carolina led 5-4. Crowe’s final line was decent – six innings pitched, four earned runs, two walks, and six strikeouts.

The Tigers continued to chip away at the Gamecock lead, and Lee said the start of the comeback shows Clemson’s toughness as a program.

“Part of our culture and part of our identity as a program is toughness. We talk about toughness and competing every single pitch, regardless of the score,” Lee said. “And the one thing that our guys understand, even when you're down by three runs going into the seventh inning, is the tying run is in the hole. Tha's all we have to do is get the tying run in there, and we did that. That's our goal when we get late in the ballgame. We don't look at it like we're down by three, we look at it like the tying run is in the hole.”

South Carolina brought in closer Tyler Johnson to pitch the eighth, and he ran into immediate trouble. Rohlman ripped a triple off the wall in right to lead off the inning, but Johnson struck out Beer on four pitches for the first out. Pinder picked up Beer, however, lining a sharp single to center that scored Rohlman with the tying run.

Pinder promptly stole second to put a runner in scoring position with one out, but Johnson fanned Jolly for the second out. The Gamecocks walked Andrew Cox intentionally to set up the righty versus righty matchup with Jackson, whose deep fly to center was caught on the warning track.

Johnson got a quick first out in the ninth, but after starting off 2-0 on Cromwell, the next hitter, he was taken out and replaced by Reed Scott. Scott threw a quick strike, but Cromwell turned around the 2-1 pitch and hit it over the wall in right for his second homer of the season and a 6-5 Clemson lead. 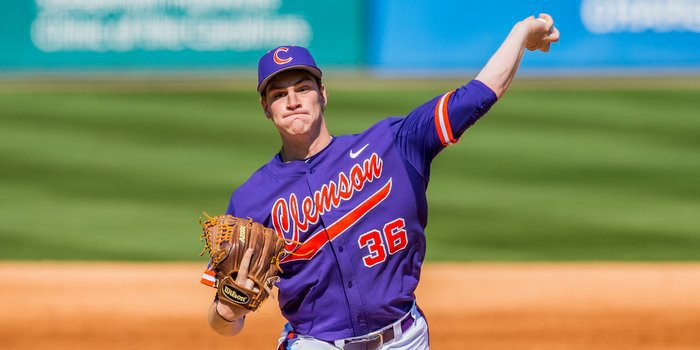 The Tigers weren’t done. Davidson singled to right field, and Rohlman followed with a single of his own. That brought up Beer, who was intentionally walked to load the bases for Pinder. Pinder walked on a 3-2 count, scoring Davidson for a 7-5 lead. That brought up Williams, who came in as a defensive replacement for Jolly in the eighth, and his grounder to short looked like a sure double play, but the second baseman couldn’t get the ball out his glove on the turn, and the run scored for an 8-5 lead.

The Gamecocks fought back, however. T.J. Hopkins walked to lead off the bottom of the ninth, but Justin Row struck out looking for the first out. Matt Williams hit an infield single, and Byrd’s throw to first allowed both runners to advance a base.

Jacob Olson’s double to left scored Hopkins and moved Williams to third – it just missed becoming a tying home run – and the Gamecocks were back in business. Bride reached on an error by Cromwell, scoring Williams, and it appeared Olson would cross the plate with the tying run.

Beer was charging in hard from left on the play, however, and threw out Olson by two feet at home for the second out. Gilliam got out of the jam by striking out Destino to end the threat and the game.

“Seth made a couple of nice plays defensively there for us,” Lee said. “He made big throw there at the end. We tell all of our players that you can impact the game on defense, as well, and he certainly did that there at the end.”

Clemson vs SC Boxscore
Get the latest Clemson gear right here!
Comment on this story