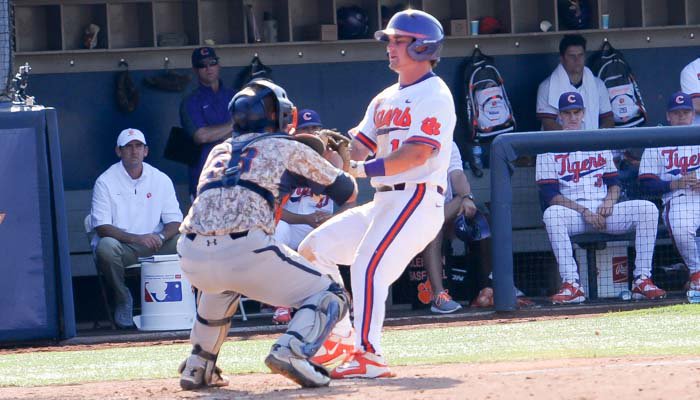 FULLERTON, CA – Saturday's NCAA regional game between Clemson and Pepperdine mirrored the results Clemson has seen on the field recently - a sluggish start followed by a furious rally and then heartbreaking defeat.

Clemson rallied from a 7-0 deficit to take an 8-7 lead in the bottom of the seventh, only to see that lead evaporate over the next two innings as No. 4 seed Pepperdine eliminated the No. 3 seedTigers with a 10-8 victory at Goodwin Field in the Cal State Fullerton Regional.

The Tigers finish the season on a three-game losing streak and have lost six of their last seven NCAA Tournament games dating back to the South Carolina Regional in 2013 when the Tigers lost two Liberty twice and then fell to Oregon and Xavier in the Nashville Regional in 2014.

Erwin got off to a shaky start walking Hutton Moyer – the second batter of the game. Brad Anderson followed that up a single to put runners on first and second with just one out and Aaron Barnett drove home the game’s first run with a single to left that was mishandled by Rohlman. Brandon Caruso hit a sac fly to center with the bases loaded to add another first inning run, before another single and mishandled ball – this time by Duggar – gave Pepperdine a 3-0 lead.

The Waves extended their lead to 4-0 with a one out home run by Chris Fornaci.

Pepperdine’s began the sixth inning with back-to-back singles that put runners on the corners after an error by Erwin. Designated hitter Nick Costello flied out to right field to score Matt Gelalich from third. The waves added two more runs in sixth making it a 7-0 Pepperdine advantage.

Steven Duggar
Jr. Outfielder
#9 6-2, 195
Moore, SC
View Full Profile with a bloop double over the head of the third baseman to put runners on second and third with nobody out. Reed Rohlman

The Tiger offense took the positive momentum into the seventh inning, scoring six runs to take its first lead of the game.

Andrew Cox
RS So. Outfielder
#6 6-0, 215
Belton, SC
View Full Profile led off the inning with a single up the middle and advanced to third on a double to left by Eli White

Chris Okey
So. Catcher
#25 5-11, 195
Mount Dora, FL
View Full Profile skirted a single just under the glove of the third baseman, scoring Krieger and Duggar. Jolly followed up with a single through the right side, putting runners on first and second. Tyler Slaton

Pepperdine wasted no time tying the game up at eight a piece. Fornaci led of the eighth inning with a double down the left field line and advanced to third on a fly ball. Anderson singled to right field, scoring Fornaci and knotting the score at 8-8.

The Waves took the lead for good in the ninth after Gelalich led off the inning with a walk and scored on a double by Jefferson throwing error by Rohlman. The inning continued as Jefferson scored on a scorcher through the 5-6 hole by Gallagher.