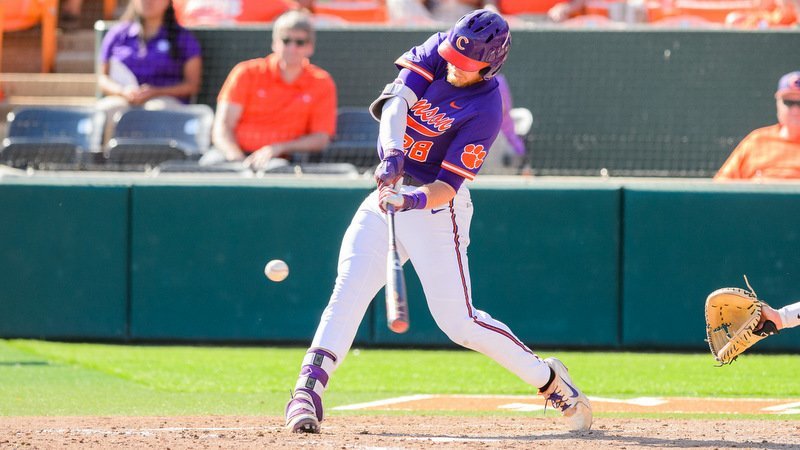 Seth Beer and the Tigers are aiming for a national seed

Clemson right fielder Seth Beer launched a two-run homer late Monday that tied the score at 4-4 in the rubber game of the series against FSU, setting up Jordan Greene’s walk-off homer in the bottom of the ninth.

Greene gets the credit for the win, but Beer’s homer was crucial. It was Beer’s 14th home run of the season, and he doesn’t seem to be slowing down any time soon.

Beer has credited his ample hitting to the toe tap he adapted from MLB superstar, Chipper Jones, as well as his ability to settle his nerves in high-stress situations. Monday, a voice from the crowd helped as well.

“You know, going up to bat the funny thing is whenever I got in the box, and the guy was taking a little time I heard my dad in the stands and he was like, call timeout, so I was like okay, I’ll call timeout,” Beer said. “So, I stepped out and things started racing through my mind and I was just like calm down, clear your head. I said some words in my head that I can’t say right now, but I just tried to clear my head and then everything went quiet. I stepped back in the box and I couldn’t hear anything, it was just me and the pitcher. All I was thinking was stay on the ball as long as possible. I got a pitch I could handle, an up and away fastball, and that’s what I did.”

Knowing when to wait for the perfect pitch has also come to the junior right fielder over the years.

“He threw me a breaking ball, it started coming at me, it was a pretty good pitch you could hit, but early in the count like that I had confidence that I was going to get another pitch to hit,” Beer told TigerNet. “You get an opportunity later in the game, so early in the game if things aren’t going your way or whatever it may be, you know you’re going to get an opportunity at some point.”

After a loss on Saturday night to the Seminoles and a win on Sunday, Monday’s game was the deciding factor on who would take the series.

“Florida State is are a great ball club, every year they compete and they do wonders so credit to them. You know all the games, for the most part, they always battle,” Beer said.

Monday’s win over the Seminoles brought Beer back to his freshman year, in the ACC championship.

“You know all the games, for the most part, they always battle. Even my freshman year in the ACC championship they were down by like 10 at one point, and they battled back,” he said. “You just know Coach Martin over there, knows what he’s doing, and his players follow him, and they believe in him, so with a win like that over a team like that you just soak it in because they are a really good ball club.”

Head coach Monte Lee also seemed pleased with the Tiger’s performance on Sunday night. Looking at the overall atmosphere of the dugout, how could he not be.

“I think he’s looking around the dugout, and guys are still jumping around having fun, and there’s no stress in the dugout when it comes to those situations, and he just voices what we are thinking,” Beer said. “It’s anyone’s ball game, what inning we will win it in, we don’t know. I feel like he just voiced it and it kinda resets and we know we are here to play. The guys are here to compete every day and give 110% every time.”