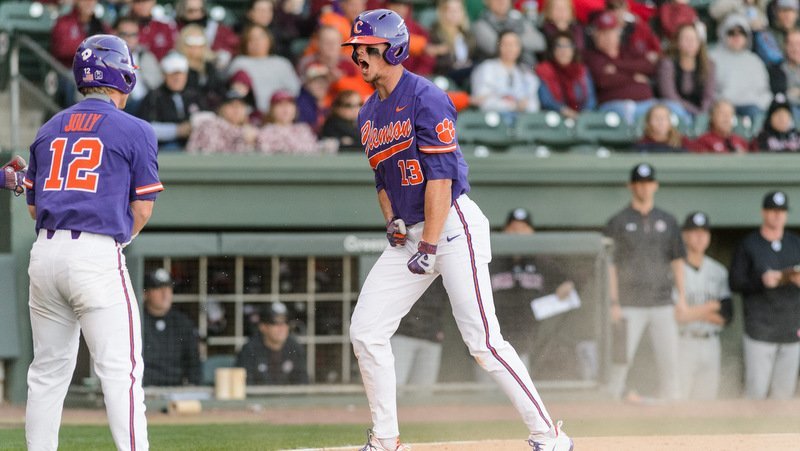 GREENVILLE – Monte Lee preaches the “free 90” to his offense, saying that walks, hit batters and reaching on errors leads to winning baseball games. That was in full effect Saturday.

South Carolina pitchers walked 10 Clemson hitters and the Tigers got a stellar relief appearance from Ryan Miller in defeating South Carolina 5-1 Saturday afternoon at Fluor Field in Greenville. The win evened the Palmetto Series rivalry with the Gamecocks at a game apiece. The finale will be played Sunday at 2 p.m. in Clemson.

A crowd of 7,385 saw the contest, the third-largest in Fluor Field history and second-largest in the rivalry. Clemson improves to 9-1 on the season and South Carolina falls to 7-4.

Patrick Cromwell drove in two runs and Logan Davidson walked three times to pace the Clemson attack. Miller pitched the final four innings in picking up the save.

"It's great to get back in this series. Winning game two was a must-win for us if we were going to try and get back in this thing," Lee said. "The credit falls on Brooks Crawford, Mat Clark, and Ryan Miller today. Ryan Miller has been the glue that we need out of the bullpen. When we need a big performance he is the one we go to. We were able to stretch him out tonight and he did an outstanding job. Our defense was good and we hit just enough. We kept getting guys on base but we couldn't get the big hit. Kyle Wilkie was the big hit of the day that made it 5-1. Now we get to go back to Doug Kingsmore for game three. We are excited about the opportunity to try and see if we can win this series at home."

"When you play with fire enough against a good team it's going to catch you at some point," South Carolina head coach Mark Kingston said. "We have a formula for winning and it's throw a lot of strikes and get ahead of hitters. We just weren't quite good enough there."

Both teams had chances to score through the first two innings, but it was the Tigers who broke into the scoring column in the third. Logan Davidson led off with a single and moved to third on Seth Beers single through the right side. Patrick Cromwell lofted a fly to center that plated Davidson for the game’s first run.

That brought up Chris Williams and the game’s strangest play. Williams walked on a 3-2 pitch and Beer was running with the pitch. No signal was given by either umpire, and Beer stood at second in confusion. When he stepped off the bag he was tagged out by the second baseman for the second out. Head coach Monte Lee argued with both the home plate and second base umpires to no avail and it was 1-0 at the end of the third.

The Gamecocks tied the score in the top of fourth when Madison Stokes launched a solo shot to left-center.

Gamecock starter Cody Morris saw his day end in the fourth. Wild for much of the contest, Morris walked three of the first four batters in the inning, loading the bases for the Tigers. He was replaced by Gage Hinson, who had the pleasure of facing Beer. The second pitch to Beer was hit to deep right center but hauled in for the second out. However, Grayson Byrd scored and Bryce Teodosio moved to third on the play and the Tigers reclaimed the lead at 2-1.

Cromwell stepped to the plate and laced a single through the right side that scored Teodosio for a 3-1 lead. Williams flew out to deep center to end the threat. Morris pitched 3 1/3 innings, giving up three runs, four hits, walking six and striking out four.

Clemson starter Brooks Crawford ran into minor trouble in the fourth – a two-out walk – and he was replaced by Mat Clark. Clark got out of further trouble, and Crawford pitched 4 2/3 innings, giving up the one earned run, walking three and striking out three.

The Tigers added on in the fifth. Robert Jolly led off with a walk and moved to second on a walk to Wharton. After another pitching change, Byrd bounced out to second, moving both runners into scoring position. Teodosio struck out for the second out, but Kyle Wilkie delivered a two-run single to right that made it 5-1 after five innings.

"He's a confident kid. He likes to say, sometimes before the game, that he will be seeing me in the press conference after the game," Lee said. "I told him if he had two hits today, he'd be hitting what he bench presses, which is .185."

Wilkie had two hits Saturday and is now hitting .216 on the season.

"You've got three strikes. Use them, be aggressive," Wilkie said. "I got a pitch where I wanted it. I just have to keep swinging the bat, keep putting good swings on it."

The game settled into a stalemate from that point, even though the Tigers loaded the bases with one out in the eighth. Cromwell hit a short fly to left and Williams was thrown out on a questionable call at the plate.

Miller allowed two singles to start off the ninth but ended the day on a liner and a double play to end the game. He earned his first save of the season. Mat Clark earned the win (2-0).

First pitch Sunday will be at 2 p.m. Sunday at Doug Kingsmore. Jake Higginbotham (2-0) will start for the Tigers.