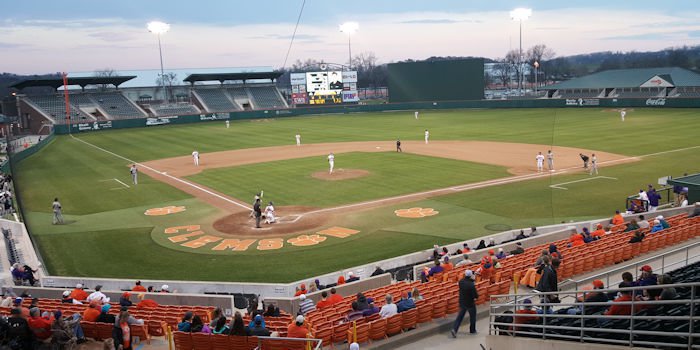 Wofford (7-1) entered Tuesday night’s midweek game on a tear, scoring 58 runs in a torrid start that saw the Terriers beat seven different teams - including Kentucky – to begin the campaign.

Good pitching beats good hitting, however, and Clemson improved to 6-1 on the season with a dominant pitching performance in a 7-0 win at Doug Kingsmore Stadium. The win was the Tigers sixth in a row after a loss in the season opener.

Clemson hit Wofford’s pitchers early and often, while the combination of Clemson pitchers Alex Schnell, Alex Eubanks, Pat Krall and Alex Bostic only gave up five hits in the game. Eubanks earned the win and continued his outstanding pitching in the early part of the season, going 2 1/3 innings without giving up a hit or a walk.

Clemson tallied 11 hits and two walks in the game and used back-to-back multiple run innings to fuel the offense. Through seven games this season, the Tigers have scored 64 total runs, compared to just 31 runs in 2015.

Clemson head coach Monte Lee told the media after the game that he couldn’t be more pleased with his team’s total performance in their first midweek game.

“We played really, really well tonight against a really good Wofford ball club. I thought it was great to score in the first inning,” Lee said. “Chase Pinder had three hits tonight and led the first off and came around to score. Reed Rohlman had a good night for us – scored two runs and drove in a run. Chris Okey had three RBIs. The middle of the order did a nice job. Eight out of our nine starters had hits tonight. Again, very productive throughout the lineup. I thought our pitching staff did a great job again. Alex Schnell, in his first start, threw the ball really, really well. I thought our bullpen – Eubanks threw well, Krall came in during a tough situation and had back-to-back strikeouts to end the inning. I thought we pitched extremely well and played defense well and hit the ball well.”Tigers trounce Terriers, 7-0

Chase Pinder led off the first inning with a single through the left side, advanced to second on an Eli White single and took third on a fly ball to right field. Okey hit a hard ground ball up the middle and drew the throw from the second baseman, allowing Pinder to score and giving Clemson an early 1-0 lead.

Schnell, the sophomore lefty, earned the start Tuesday afternoon, and he pitched 3 1/3 innings, allowing four hits and a walk while striking out two.

Reed Rohlman got Clemson’s offense going again in the fourth with a single up the middle. He took second on a passed ball and third on a Weston Wilson single through the left side. Seth Beer – who struck out for the first time in his Clemson career in the first – hit a looping single to right field that scored Rohlman. Chris Williams hit a grounder down the third base line that the third baseman couldn’t corral, allowing Beer to take third and then score the second run of the inning. Adam Renwick flied out to right to tack on a third run as Wilson tagged up from third, extending Clemson’s lead to 4-0.

Wofford starter John Caskey was chased after 3 1/3 innings, after giving up four runs –only one earned – on six hits while striking out three.

The Tigers added to the lead in the fifth. White earned a walk with a nine-pitch at-bat to begin the frame and stole second after relief pitcher Elliot Lance threw over to first several times. Rohlman laced a single through the right side to advance White to third with no outs. Okey promptly rocketed a double up the middle to clear the bases and give Clemson a 6-0 lead.

The Tigers loaded the bases with no outs in the sixth after a leadoff single, a walk and another single, but only managed to score one run, as Rohlman flied out to center scoring Renwick from third. Clemson led the Terriers 7-0 after six innings.

Clemson plays a three-game set with arch-rival South Carolina this weekend. The first game is set for 7 p.m. in Columbia Friday night. Saturday’s game will be at Fluor Field at 2:30 p.m. and Clemson will host the Gamecocks Sunday at 2 p.m.

Lee said this weekend’s series against the Gamecocks will be exciting because both teams are playing at such a high level.

“I don’t see how we could [be any more confident]. I think we’re going to be very confident going into the weekend,” he said. “We’ve pitched well. We’ve played good defensively. We’ve hit well. The bullpen has done a nice job. There’s just a lot of positives going into this weekend. I think our guys are going to be confident. They’re going to be excited about playing in such a great rivalry against a great opponent. We understand how good South Carolina is this year. They’ve got a great team and they’re playing really good baseball right now, so it should make for a really exciting matchup Friday night.”

Clemson vs Wofford Boxscore
Get the latest Clemson gear right here!
Comment on this story