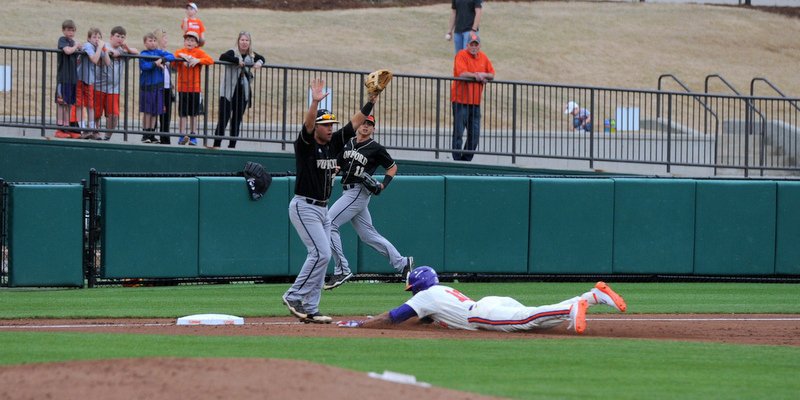 Jackson pitched seven innings in earning his first win as a Tiger (1-0), allowing just three hits, an earned run and a walk while striking out nine.

The Tigers improve to 6-2 with the win, while Wofford falls to 2-6.

Five different hitters had at least two hits, while K.J. Bryant and Andrew Cox each drove in two runs. K.J. Bryant had a double and a triple after moving back into the leadoff spot.

"What a great start by Tyler Jackson tonight. Did an outstanding job as well as our pitching staff in general," head coach Monte Lee said. "We got eight of the nine leadoff hitters out. He got every leadoff hitter out that he faced with only one walk on the night. I thought he threw the ball very, very well. It was great to see him come out and establish the bottom of the strike zone. He had his slider going tonight. He was very aggressive. I thought his tempo was good. Executed pitches and did an outstanding job. It was good to get a number of relievers in there. I thought (Paul) Campbell threw the ball well. Ryan Miller, it was good to get him in there and he located his pitches well. We got (Jeremy) Beasley some action. He hadn't pitched in a while. Those are guys we feel like we're going to have to count on this year."

The Tigers got on the board early, scoring a pair of runs in the first inning. Reed Rohlman punched a one-out single to left-center and moved to second on Seth Beer’s groundout. Chase Pinder was hit by a pitch, and Cox laced a double down the first base line that scored Rohlman and Pinder for a 2-0 lead. 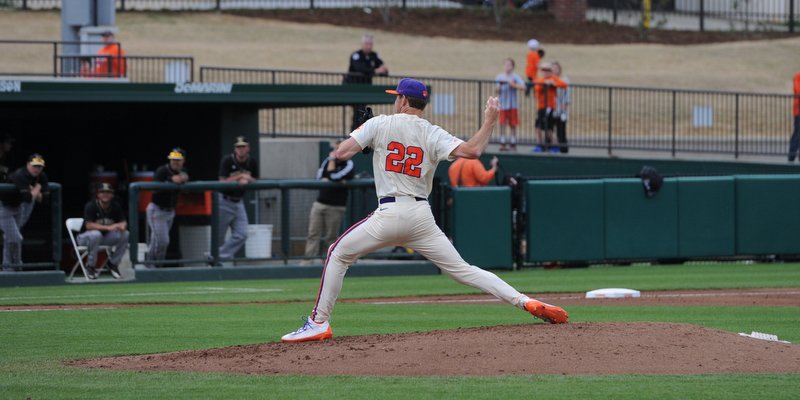 They added to their advantage in the second, and they did it with two out in the inning. Robert Jolly stroked a single to left field and advanced to second on a wild pitch. That brought up Bryant, whose sharp liner to right was misplayed by the right fielder into a triple that scored Jolly for a 3-0 lead. Bryant later scored on a balk and the Tigers led 4-0 at the end of two innings.

Jackson sailed through the game’s first five innings before giving up a run in the sixth. Wofford’s Kody Ruedisili singled to center with one out, stole second and scored on Brett Hash’s RBI single. Jackson escaped further damage and Clemson held a 4-1 lead through six innings.

The Tigers effectively put the game out of reach with three runs in the bottom of the eighth. Logan Davidson led off the inning with a double to left-center and advanced to third on a sacrifice bunt by Cromwell.

Grayson Byrd singled up the middle to score Davidson, and Jolly’s double down the left field line scored Byrd for a 6-1 lead. Jolly advanced to third on a throwing error, and he later scored on a fielding error by the Wofford pitcher as Clemson extended the lead to 7-1.

The Tigers weren’t done yet, however. Bryant, who reached on the error by the pitcher, moved to third on Rohlman’s double and the Terriers intentionally walked Beer to load the bases. Pinder made them pay with a two-run single to center to make it 9-1.

Wofford scored the final run of the night on a solo homer to left by Brett Rodriguez.

"Very, very pleased with our pitching staff and our defense. Only two walks and no errors," Lee said. "Our guys are doing a really good job of limiting the free pass. Offensively, I thought we were okay. We came in spurts. In the first and the second we got things going in both of those innings with two outs. It was great to see K.J. have a good night offensively. Middle of the order did a good job and then Robert Jolly has been red hot. We had the big inning in the eighth. It was a tight ball game until then and we broke it open in the eighth inning. Overall, I thought we swung the bats okay. We've got to do the little things a little better."

The Tigers start a three-game series against arch-rival South Carolina next Friday. The Gamecocks play at Clemson at 6:30 p.m., the teams play at Greenville’s Fluor Field at 1 p.m. Saturday and finish the series with a 1:30 p.m. start at Founders Park in Columbia Sunday afternoon.

Clemson vs Wofford Boxscore
Get the latest Clemson gear right here!
Comment on this story