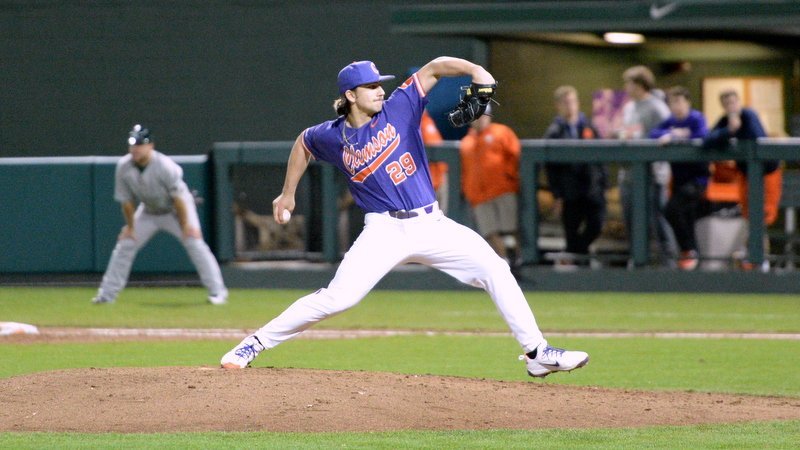 Strider hopes to come back stronger than ever next season

CLEMSON – Monte Lee sat in the Clemson dugout Friday afternoon and looked out over the playing field on a day filled with warmer weather and sunny skies, the kind of weather he hopes to have in two weeks when his Clemson Tigers open the 2019 season.

When asked about sophomore Spencer Strider, Lee merely shrugged his shoulders and said, “What can you do about it? You just go on.”

Strider tore his UCL on the first day of practice, making a throw he’s made thousands of times, and will have Tommy John surgery next week. He struck out 70 batters in 51 innings pitched and opponents hit only .215 against him.

“Injuries are part of the game. It’s just one of those things that you have to deal with. Obviously, you feel really bad for the guys individually when they have to go through it, but all you can hope for is that the team steps up,” Lee said. “There’s no point in continuing to feel bad about it. It is what it is. We have to deal with it but we also have to move forward. We have a great team, a great group of guys, and we’re going to move forward and try to be as positive as we can.”

Strider said he knew what had happened as soon as he felt a pop.

“I hadn’t felt any discomfort prior to warming up. When I was warming up, I just felt a pop,” Strider said. “My first intuition was it was probably my UCL, just from what I’ve heard. And the MRI confirmed it. It’s going to be good for some of the younger guys to step up and good for the team in certain ways. You’ve just got to embrace the adversity.”

The surgery requires 10-12 months of recovery time, but Lee said Strider has the strength to survive a long rehab.

“I had a conversation with him, a personal conversation just about what I think of him and what I believe in my heart he needs to do — just to help his teammates. His teammates are going to be there for him, I just want to be there for Spencer,” Lee said. “One thing is for sure - the recovery rate, the comeback rate with injuries that he’s dealing with is pretty high. He’s going to be fine.

Strider said he will control what he can control.

“It’s adversity. It can come at any time. You never know what’s going to happen,” Strider said. “That’s one of those things that’s really out of your control. You try to put yourself in the best position possible to avoid injuries but it’s something you can’t control so it’s tough.”

Strider was penciled in as one of the weekend starters, and now Lee will have to look deeper into his pitching rotation. Lee said Brooks Crawford and Jacob Hennessy are high on his list, along with freshman hurler Davis Sharpe, who has drawn rave reviews in camp.