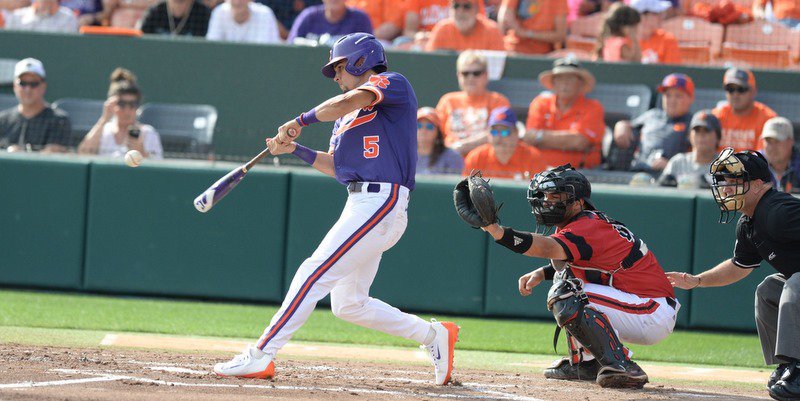 Clemson led most of Saturday’s game against No. 2 Louisville, but the Cardinals went to the long ball and broke the Tigers’ hearts, crushing four homers over the final four innings for a 6-4 victory, winning the second game and the series with the victory and clinching the ACC Atlantic Division regular season championship.

Since winning the first game of the series at FSU three weeks ago, Clemson has lost eight of 11 games - and six in a row - in the conference.

Clemson head coach Monte Lee said that no matter happens from here he knows what his team is capable of doing.

Chase Pinder and Andrew Cox each homered and had two hits, with Pinder driving in two runs. 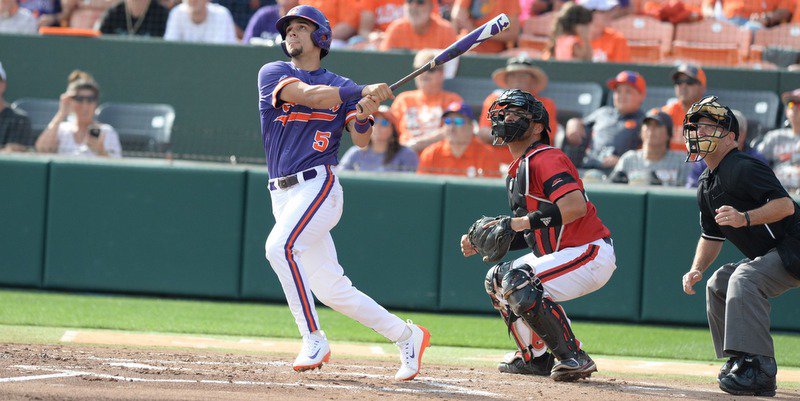 The Tigers did something in the first inning Saturday that they couldn’t accomplish in Friday’s loss – get a two-out hit with a runner in scoring position. Logan Davidson walked to lead off the bottom of the first, stole second and came home on Seth Beer’s two-out single up the middle for a 1-0 lead.

The Tigers got another big two-out hit in the third. Davidson lined a one-out single to right, and with two out in the inning Chase Pinder turned on a high fastball and deposited into the Chapman Grandstands for a 3-0 lead. It was Pinder’s fifth homer of the season.

The Tigers added to the lead in the fourth. Cox stepped in and turned on a 1-0 fastball, depositing it over the wall in right for a 4-0 lead. It was his fourth homer of the season.

The Cardinals finally got to Eubanks in the sixth. Colby Fitch led off the inning and smacked his second homer of the series, a liner over the wall in right that made it 4-1. Drew Ellis singled with two out, and Devin Mann wrapped a two-run homer around the foul pole in left and Clemson held a 4-3 lead.

Eubanks was done after seven innings. He threw 94 pitches, giving up seven hits, three runs, striking out eight and walking none.

Jeremy Beasley replaced Eubanks to start the eighth and immediately gave up another homer to Fitch, who went high over the wall in center to tie the game at 4-4. Brendan McKay singled to center field, and Lee replaced Beasley with Ryley Gilliam. Gilliam faced Ellis, who launched a two-run shot over the wall in left to give Louisville its first lead of the day at 6-4. The homer was the 14th of the season for Ellis.

Chris Williams walked to lead off the ninth inning and advanced to second on a ground out by Cox. Greene flied out for the second out and pinch-hitter Weston Jackson struck out to end the threat and the game.

Lee said the difference in Saturday's game was Louisville found a way to get the job done in the late innings.

"We did a lot of really good things in the ballgame, but you've got to give Louisville credit," Lee said. "We did not walk a batter, didn't make an error, played good defensively, swung the bats well especially in the first half of the ballgame, but the bottom line is they got the big inning there in the sixth to tie it up and in the eighth inning a couple of home runs. We left two strikes ups - a two-strike pitch up to Fitch who's been on fire and Ellis got enough of the pitch. We made a mistake over the plate and he hit it a long way.

"I know it's very tough. It's tough on us, but we pounded the strike zone. We played good defensively today. Pinder made a couple of great plays in the outfield. We made some good plays in the infield. We hit a couple of home runs and swung the bats well early in the game. The big difference is we couldn't find a way to get anything going from the fifth inning on. Louisville played really well in the second half of the ballgame. We've just got to keep competing, keep fighting and hopefully, we can find a way tomorrow to get things going in the right direction."

The series finale is scheduled for Sunday at 1 p.m. at Doug Kingsmore.

Clemson vs Louisville Boxscore
Get the latest Clemson gear right here!
Comment on this story