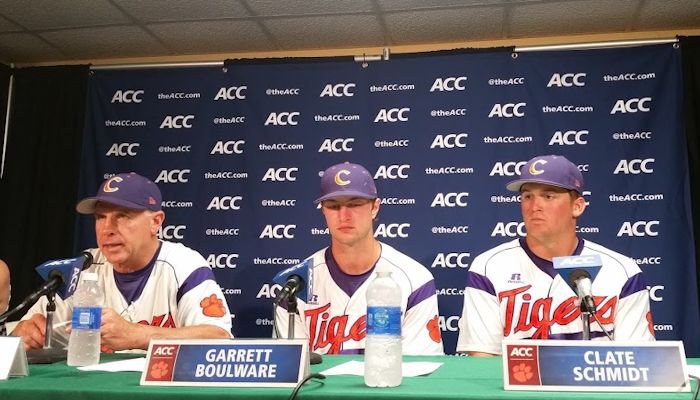 Monday at Doug Kingsmore should be interesting.

Many so-called experts thought that Clemson needed to win two games in the ACC Tournament this week in order to earn a berth in the NCAA Tournament that begins next week. The Tigers managed to win the first two games – wins over Duke and Miami – but lost a chance to play in the ACC title game with a desultory 3-0 loss to Georgia Tech in front of a sparse crowd at NewBridge Bank in Greensboro.

Monday, the Tigers will wait on the NCAA selection committee to see where and if they play next and if the team can find a way to get their bats going. In the three games of the ACC Tournament, the Tigers scored in just four of 27 innings, batted .245 overall and were shut out on four hits Friday.

“We actually played pretty good against Duke and played good yesterday, and played good offensively. Seen good pitching all three days,” Leggett told TigerNet after the game. “We just couldn’t get it going today, that’s all there is to it. The other two days I was proud of how we played offensively and anytime you’re in this league and playing in this kind of tournament, you are you’re going to see everybody’s combination of “best guys” and we were just a little off the mark today and maybe they were a little better on the mound, against our hitters. “

“I thought Clate did a great job for us, went out and pitched in a great situation and gave us everything he had, put us in a position to win, we could just not get anything going offensively,” Leggett said. “We had lead off men in the first four or five innings and couldn’t materialize with it and get things going and couldn’t get back to back hits together. So it was a very tough and frustrating offensive day for us, after the good win last night. One of those games where they pitched exceptionally well and we just couldn’t make adjustments.

“He did a great job for us, that’s all there is to it. Had a really good feeling about him going into the game actually, and he proved to be the right guy against them and pitched out of some jams early. We made a couple of mistakes one inning where we couldn’t handle the bunt that kinda hurt us. At the same time if you don’t score runs you’re not going to win a ballgame, so we couldn’t piece anything together offensively to get the spark going that we needed. “

Clemson’s pitching staff gave up just eight runs in the tournament, and Leggett said that gives him confidence heading into a potential regional and that he thinks the Tigers are worthy of a bid.

“I would hope so, you know. We played tough in this tournament, it’s a great conference,” Leggett said. “We finished second in our division, fifth in the conference, won two ballgames here, beat Duke, beat Miami, played tough today. We got a great baseball team. I would be shocked and disappointed if anything else happened, so we’re looking forward to going back and practicing and hopefully preparing ourselves for next weekend.”