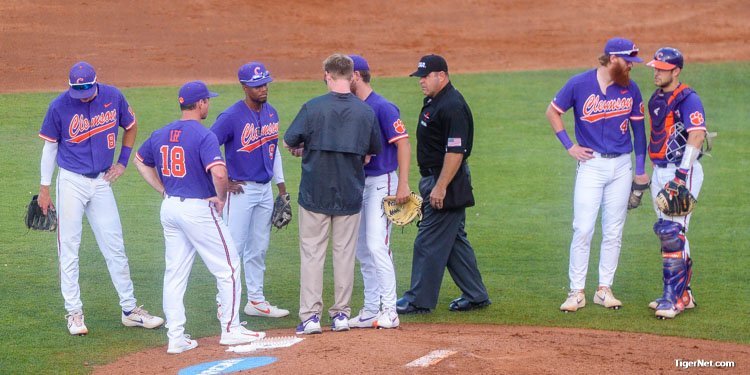 OXFORD, MS – Clemson’s baseball team is in all too familiar situation heading into Sunday.

For the fourth consecutive year, Clemson opened postseason play with a win on Friday. And for the fourth straight year, the Tigers dropped the second game of a regional, setting up a possible three-game stretch of win-or-go-home for the Tigers.

Clemson will face Jacksonville State at 3 p.m. Sunday needing a win to keep its season alive. If the Tigers beat the Gamecocks, they will need to beat Ole Miss Sunday night and again Monday to advance to a Super Regional for the first time since 2010, which is also the last time the program advanced to Omaha and the College World Series.

“Thought Doug Nikhazy was outstanding. He was phenomenal. Pitched extremely well and the closer at the end of the ball game did a nice job of just filling up the strike zone,” head coach Monte Lee said. “We hit some balls hard there at the end, but they made the plays. The story of the game was their starting pitcher. They got to (Mat) Clark early in the ball game. They hit back-to-back home runs. Gave up the big inning in the second, had to go to the bullpen. I actually thought our bullpen did a nice job.

“But at the end of the day, we didn’t have a ton of opportunities. We had first and third late in the game. Bryar (Hawkins) hit into a double play. Only scored one there. And we made a little bit of a run there at the end, but overall Nikhazy was very good. Thought their offense was very good. They got into our bullpen early. We had to use a number of guys. Thought we competed and gave ourselves a chance out of the bullpen. But offensively we just could not find the answer against their starter tonight. He was outstanding.”

Lee said his team knows their season is on the line.

“We need to understand that the plan is to be here for a while. That’s the goal. But we gotta worry about game one first. We know what’s at stake,” Lee said. “Our season’s on the line. We gotta be mentally prepared to be here for quite a while tomorrow and compete every inning. Some guys on the mound are gonna have to step up. Offensively I think we’ve gotta be a little bit better. We chased out of the zone quite a bit tonight. We need to be a little more disciplined at the plate.”

Leading hitter Grayson Byrd took exception when a reporter asked if the team was still confident heading into Sunday.

“If you’re doubting if we want it bad enough, you’re talking to the wrong team,” Byrd said. “We want it bad, obviously. That’s what we came to Clemson to do. Our backs are against the wall a little bit, but we’ll get ready to go tomorrow.”

Lee said his team would empty the tank Sunday.