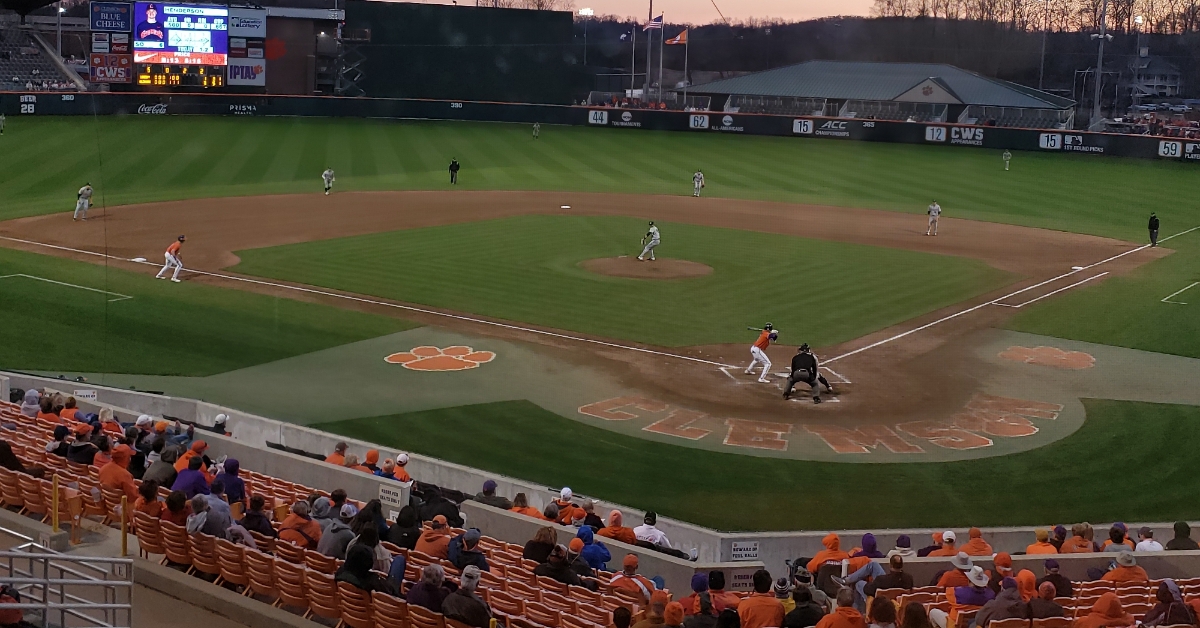 CLEMSON – Clemson’s season opener might be a sign of the season to come – pitch well enough to win and scratch out runs.

Four pitchers held Liberty to just two earned runs and the Tigers got a homer from Sam Hall in defeating Liberty 5-3 in the season opener at Doug Kingsmore Stadium Friday afternoon.

Clemson improves to 1-0 on the season while Liberty falls to 0-1. Geoffrey Gilbert picked up the win in relief. Carson Spiers pitched the last three innings to pick up the save. The Flames left 17 runners on base while Clemson left 11.

Clemson starter Sam Weatherly was effectively wild during his four innings of work. However, the Flames pushed across the first run of the season in the fourth. Ben Highfill doubled to lead off the frame, and two hit batters later there were two out with the bases loaded. Garrett Wilkinson walked on a 3-2 count and Liberty led 1-0.

Hall tied the score in the bottom of the inning, lining an 0-1 pitch over the wall in left-center to make it 1-1.

Elijah Henderson walked to lead off the bottom of the fifth but was forced out on Kier Meredith’s grounder to second. Meredith was caught leaning off of first but the throw to second was dropped by the shortstop. One out later, Adam Hackenburg singled to left and Meredith scored with ease to make it 2-1.

The Tigers added on in the sixth. Hall and Teodosio walked with one out, and a wild pitch moved both runners up a base. The catcher’s throw to third got past the third baseman, allowing Hall to score and Teodosio to move to third. Teodosio scored on Elijah Henderson’s single to left and Clemson led 4-1 at the end of six.

Gilbert, who replaced Weatherly, was done after two innings. He gave up just one hit, walked three and struck out two while throwing 50 pitches, 26 for strikes.

Sheldon Reed started the seventh but walked the first two batters and was replaced by Carson Spiers. The first batter hit a shot to Hall at short, and Hall flipped to Mac Starbuck for the first out. Starbuck’s relay throw to first was muffed by Chad Fairey, allowing the runner to reach and the run to score to make it 4-2.

Starbuck stroked a sharp single to left (his first career hit) to start the eighth and moved to second on a wild pitch. With one out, Meredith dropped a perfect bunt in the no-man’s land between the pitcher’s mound and first for a base hit that moved Starbuck to third. James Parker then singled up the middle to make it 5-2.

Two errors in the ninth led to Liberty's final run.