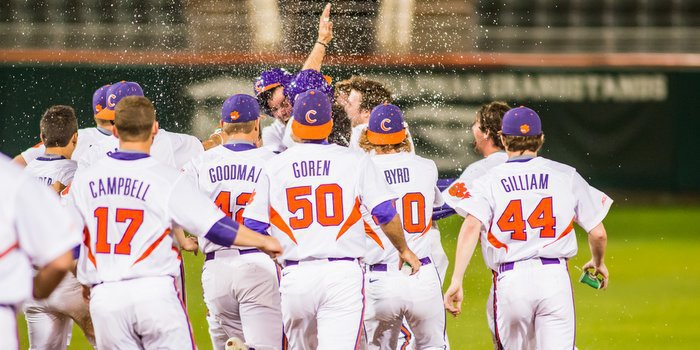 Clemson players celebrate with Jolly after the walk-off

CLEMSON – Pinch-hitter Robert Jolly hit a bases-loaded, walk-off single with one out in the bottom of the ninth as Clemson scored three runs and came back to defeat Winthrop 4-3 at Doug Kingsmore Stadium Wednesday evening.

No. 20 Clemson (9-2) trailed 3-1 entering their last at-bat, leaving the Tigers with one last chance to win or tie in the ninth. Pinder led off the inning with a single, bringing up Rohlman. Rohlman dropped what appeared to be a double down the left field line, but the home plate umpire called it a foul ball. Replays showed the ball hitting the foul line, but the call stood.

Eli White was hit by a pitch to put runners on first and second, and Beer drilled a ball off the wall in center to score the tying runs. Okey was intentionally walked to bring up Wilson with one out and runners at first and second.

A passed ball moved both runners up a base – to second and third – and Wilson was walked to load the bases. Jolly was brought in to pinch hit for Adam Renwick, and Jolly lined the single into left field for the game-winner.

Winthrop falls to 7-6 with the loss.

Clemson players celebrate with Jolly after the walk-off"

"Well, I'll take an ugly win over a beautiful loss any day. I thought we pitched extremely well. Only one walk which was the leadoff guy and we had him 0-2 and he walked," head coach Monte Lee said. "You have to give him credit and that run scored. Besides that, not another walk, so we threw the ball very, very well. I thought Pat Krall was very good again. Crawford and Bostic all did an excellent job. Offensively, we found ways to get on base. We walked nine times. We got hit by four pitches and stole a base. We had 14 free in that game. You have to give Winthrop credit. Their pitching staff did an unbelievable job.

"The kid that came in there at the end could pitch for anybody. I thought their pitching staff did a really good job. You've got to give Coach Riginos and their staff credit. We found a way to capitalize at the end of the ballgame. It all started with Chase Pinder who had a great at bat to lead the inning off. Eli gets on base and then Seth Beer is the best freshman hitter I've seen. A huge at-bat for us to tie it up. Then, the walked Okey and Wilson. We brought in Jolly and he's just a gritty hitter. We needed a toughness at bat in that situations and he delivered for us. It was a total team effort."

Freshman lefty Jake Higginbotham got the start Tuesday night and only lasted 4 1/3 innings. He gave up three runs on three hits and a walk while striking out two.

It was the walk that got things going for Winthrop as Tyler Asbill led off the game with a walk, advanced to second on a single and third on a fielder’s choice. A long fly ball plated Asbill for the first run of the game, giving the Eagles a 1-0 lead.

Higginbotham retired 12 in a row before running into trouble in the fifth inning. Winthrop led off the inning with back to back singles and put runners on second and third with just one out after a groundout back to the mound, bringing Clemson’s starter’s day to an end.

Riley Gilliam entered the game and promptly threw a wild pitch over the head of catcher Chris Okey, scoring Jace Whitley from third and allowing Mark Lowrie to advance to third, and just like that Gilliam’s day was complete.

Junior lefty Pat Krall entered the game for Clemson to try and get the final two outs of the inning, but with just one out, Asbill laid down a picture-perfect bunt down the first base line to score Lowrie and give Winthrop a 3-0 advantage.

Clemson answered in the bottom of the fifth with a run of its own when Chris Okey was hit on his back leg by a pitch with the bases loaded making it a 3-1 game.

The Tigers continued to get lost on the bases – Seth Beer had a baserunning blunder in the seventh – it should have loaded the bases, but he was caught in a rundown and tagged for the last out. In the eighth, Andrew Cox reached on a fielder’s choice but tried to run to second and was tossed out easily at second to end the inning.

Lee said he was proud of how his team responded after the early struggles.

"We left too many guys on base. We definitely made some baserunning mistakes," he said. "It's still early in the year and we have to learn and get better. I thought my team was calm today. I thought we were competitive. I thought there was a lot of energy in the dugout, so I was very proud of how we approached this ballgame and very fortunate to come out with a win."

Clemson opens ACC play this weekend with a trip to Winston-Salem for a three-game series with Wake Forest. Friday’s game is a 6 p.m., while Saturday’s game is scheduled for 4 p.m. and Sunday’s game is at 1 p.m.