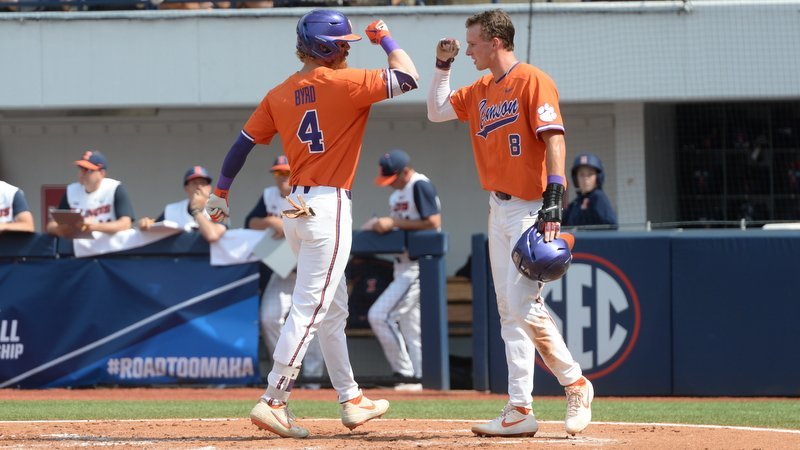 Davidson scores an early run for the Tigers

OXFORD, MS – The Tigers and Davis Sharpe took the fight out of the Fightin’ Illini.

Grayson Byrd homered and drove in three, Kyle Wilkie had four hits and drove in three, and Sharpe came out of the bullpen to earn the win as No. 3 seed Clemson defeated No. 2 seed Illinois 8-4 Friday afternoon in the first game of the NCAA Oxford Regional at Swayze Field.

The Tigers had 12 hits, drew eight walks and two batters hit against seven Illini pitchers in leaving 11 runners on base.

Clemson improves to 35-24 with the win and will play the winner of Friday’s night contest between No. 1 seed Ole Miss and No. 4 seed Jacksonville St. at 7 pm. The Illini (36-20) play the loser of that game at 1 pm on Saturday.

Sharpe, who hadn’t pitched since May 19th, pitched 6 2/3 innings to earn the win. He gave up one run (unearned) three hits, walking one and striking out four.

The Tigers jumped on Illinois starter Ty Weber early. Logan Davidson stroked a one-out double off the wall in left-center in the top of the first, and Kyle Wilkie lined a two-out single to center to give Clemson a 1-0 lead.

The Illini tied the score in the bottom of the frame off starter Jacob Hennessy. Branden Comia doubled to lead off the frame and came around to score on Kellen Sarver’s two-out single. Hennessy gave up the lead in the second after hitting the first batter of the inning and giving up two singles to score the run for a 2-1 lead.

Green homered to lead off the third, his third of the season, tying the score at 2-2. Davidson was hit by a pitch and Byrd hit a 2-2 pitch from Weber that curled around the foul pole in right for a 4-2 lead. The homer was Byrd’s team-leading 16th of the season. 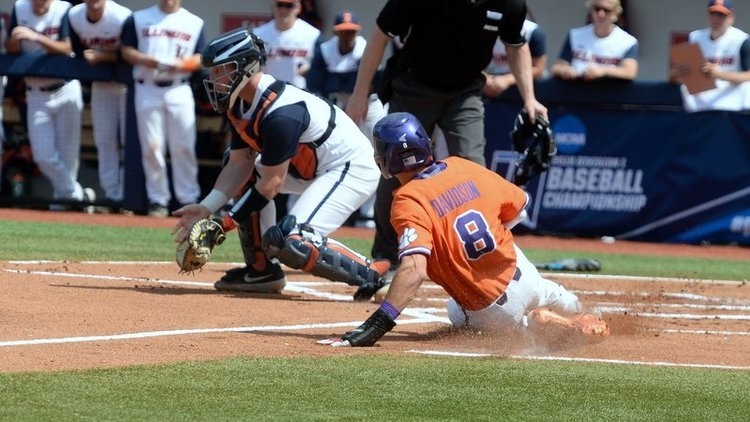 Davidson scores an early run for the Tigers"

A walk and two singles finished Hennessy’s day in the bottom of the third. Zac Taylor walked to lead off the inning and promptly stole second and came around to score on Cam McDonald’s single through the right side. Hennessy was replaced by Davis Sharpe who got out of the inning without further damage.

Hennessy pitched 2 1/3 innings, giving up six hits, three runs (all earned), walking one and striking out one.

Sharpe ran into trouble in the sixth after giving up two singles and a walk. With one out, the Rebels sent Michael Massey to the plate, and he lined an 0-2 pitch at second baseman Jordan Greene. Greene scooped the liner on one hop, flipped the ball with his glove to Davidson for the first out and Davidson’s relay to first beat Massey by three steps to end the frame without any runs being scored.

The Tigers piled on in the seventh. Green singled to left start the inning, Davidson walked, and Byrd singled to left to load the bases with no out. Kyle Wilkie laced a two-run single to right and took second on the throw. One out later, Greene bounced to short and the shortstop flipped the ball to third, but Wilkie slid under the tag and the run scored to make it 7-3. Hall walked to once again load the bases and Hawkins launched a ball into the gap in right-center that was caught by the right fielder.

Wilkie, who should have stayed at third and scored easily on the play, left third early and after an appeal was called out for the final out.

Green was hit by a pitch with one out in the eighth and moved to second on Byrd’s run-scoring single to center, giving Clemson an 8-3 lead. The Tigers loaded the bases with one out but Bryar Hawkins fouled out and Greene bounced into a fielder’s choice to end the threat.