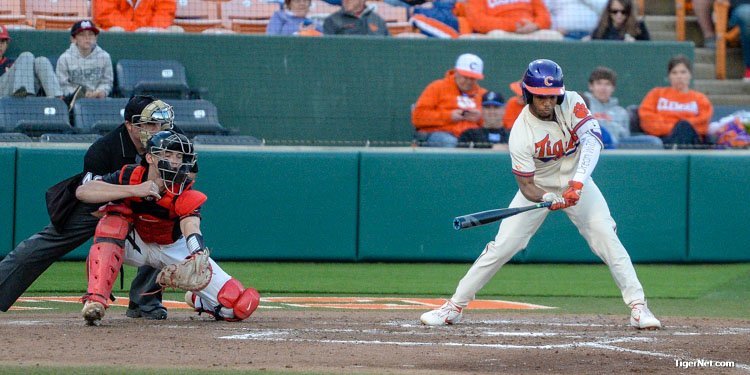 No. 4 Georgia held No. 13 Clemson to just four hits and defeated the Tigers 5-3 Tuesday night at Doug Kingsmore Stadium, the third consecutive win in the series for the Bulldogs. Georgia improves to 24-5 with the win while Clemson falls to 22-7.

The Bulldogs greeted Clemson starters Brooks Crawford with a couple of runs in the first. Riley King singled to right field with one out, and Aaron Schunk blasted a homer to deep left for a quick 2-0 lead. The homer was the fifth of the season for Schunk.

Crawford pitched two scoreless innings but was chased in the fourth. An error by third baseman Grayson Byrd opened the inning, and a fielder’s choice and a hit batter later, Cam Sheperd laced a two-run double into the gap in right-center to give Georgia a 4-0 lead.

Crawford was pulled at that point, giving up four runs (two earned) on four hits with two walks and two strikeouts in 3 2/3 innings. He falls to 1-2 with the loss.

Clemson’s bats were silent against Bulldog starter Tim Elliott, who breezed through the first 10 batters without allowing a baserunner. Logan Davidson broke up the no-hitter with a single to left with one out in the fourth, but the Tigers failed to capitalize.

Davis Sharpe broke up the shutout with a homer to left with two out in the fifth, his third home run of the season, and Georgia led 4-1. 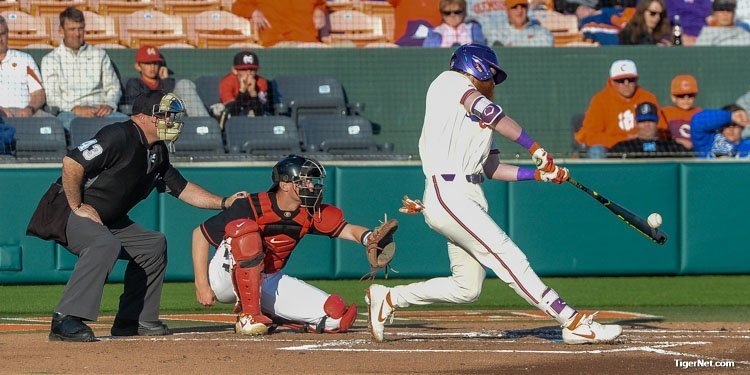 Owen Griffith was stellar in relief of Crawford, pitching three solid innings, giving up just one hit while walking one and striking out two.

The Tigers chased Elliott in the bottom of the eighth. Sharpe laced a one-out single to right-center and Elliott, at 96 pitches for the night, was replaced by Justin Glover. Sharpe advanced to second on a wild pitch and then moved to third on a wild pitch that also allowed Bryce Teodosio to walk.

Jordan Greene hit a fly to medium left that scored Sharpe for the second run, and the Bulldogs made another pitching move, replacing Glover with Schunk. Schunk got Sam Hall to fly out to right to end the threat and the Bulldogs to a 4-2 lead into the 9th.

Georgia added a single run in the 9th.

Davidson stroked a double into the right-field corner to lead off the ninth, but Wilkie lined out to center for the first out. Grayson Byrd stepped to the plate and Davidson moved to third on defensive indifference. Byrd bounced to second for the second out and Davidson scored on the play to make it 5-3. Bryar Hawkins hit a sharp grounder to third to end the game.

The game was the first of two meetings between the teams this season. Clemson will play at Georgia on Tuesday, April 16th.

The Tigers return to ACC play with a three-game series against Louisville this weekend. Game one Friday at 6 pm, game two is Saturday at 5 pm and the series finale is Sunday at 1 pm. The Cards and Tigers are tied for second place in the ACC Atlantic with identical 9-3 records, a game behind division leader NC State (10-2).

Clemson-Georgia box
Get the latest Clemson gear right here!
Comment on this story