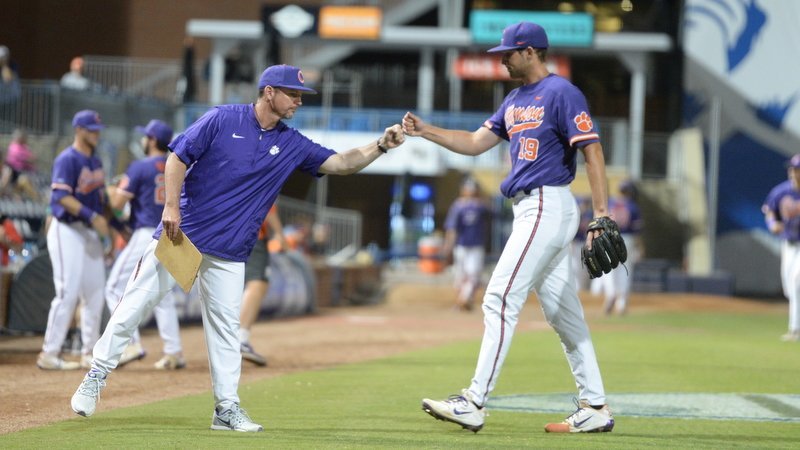 DURHAM, NC – Monte Lee is all about having fun. Just don’t put bubblegum on his cap or you’ll get kicked.

Lee’s in-game television interviews this season have been punctuated by the pranks of his players. Lee has been the target of peanuts and sunflower seeds, he’s had players loom over his shoulder during interviews and he’s had bubblegum on his cap.

During Thursday’s 7-1 win over Miami, pitcher Jake Higginbotham peered over Lee’s shoulder during the interview, and Lee knew Higginbotham was back there.

“I knew he was there,” Lee said Friday as the Tigers practiced at the old Durham baseball stadium. “I told him he just couldn’t touch me. And I don’t like bubblegum on my hat because it’s hard to get off. I told him if he did that I would kick him. Of course, I can’t do that but I am not going to tell him that.”

This Clemson group now stands at 45-13 overall and will play Florida St. tonight in the semifinals of the ACC Tournament. The winner advances to Sunday where they will play the winner of Saturday’s Louisville vs. Pitt matchup.

Win or lose, however, this team is having fun and Seth Beer hopes the team can repeat the 2016 ACC Championship.

“I think all of our guys are excited to get here and we just hope we are fortunate enough to move on to the next round,” outfielder Seth Beer said. “Just seeing everything, those fun memories just keep coming back,” the All-American said. “Brooks (Crawford) and I were both just talking about it. It is really a fun time so let’s see if we can get another one.”

The Tigers have won eight consecutive games and 19 of the last 21 and appear to have a national seed in the NCAA Tournament locked up. Lee was asked about the similarities between the 2016 and 2018 clubs and said the teams differ in the leadership style of the upperclassmen.

“They are similar teams in terms of their chemistry and in their personalities,” Lee said. “This group is fun to be around. It is a very loose and laid back group. That group had Chris Okey and Pat Krall, you know more physically intense types of competitors.”

This year’s Clemson team isn’t just about having fun, however. It’s also a confident group that believes it can make it to Omaha.

“This group is a little more laid back. They are very cool and collected. They are very confident. This is an extremely confident group,” Lee said. “Even before (Thursday’s) game, they were really loose and laid back. It was kind of another game to them, and I don’t mean that with any disrespect, I think that is why we have been so consistent. These guys don’t really get all that amped up. They know they are a good club and if they do what they do then they are going to give themselves a chance to win the game and that is kind of what I have seen out of this group this year.”