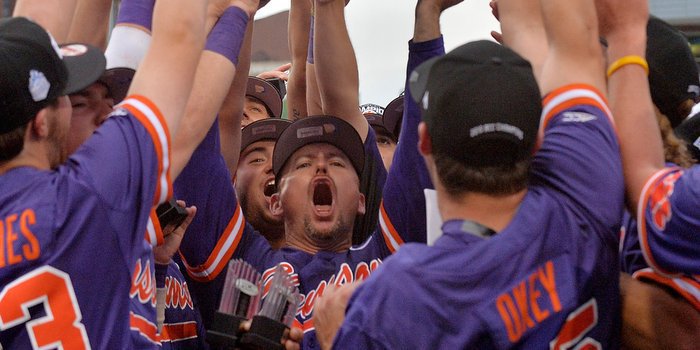 Lee gets doused by his players Sunday

CLEMSON – During the frantic moments following Clemson’s Atlantic Coast Conference Championship clinching win over Florida St. last Sunday, head coach Monte Lee studied the final box score of the game in preparation for doing a live television interview. With Lee’s concentration elsewhere, two members of his baseball team took the opportunity to creep up behind Lee with a Gatorade bucket full of water.

They took him by surprise, but as the water poured off of Lee’s ACC Champions hat and uniform the usually stoic Lee raised both fists in the air and let loose a scream of absolute joy, setting off a wave of emotion from his players.

It was a rare moment of emotion for Lee, who has transformed himself from a hot-headed player to a player’s coach, a coach with a calm demeanor even in the worst of times. Lee’s players thrive under his coaching style, and during Tuesday’s session with the media, Lee opened up about the difference between Lee the player and Lee, the coach.

“I think in the game of baseball, I've often tried to coach players the way that it would've worked best for me. I was a highly frustrated, hot-headed, helmet slamming, temper tantrum player,” Lee said. “I was the guy that would break bats. I was a high-intensity player. I was a football player playing baseball. I was a constant up and down player because I couldn't deal with frustration and failure, and when I got into coaching I saw a lot of the same characteristics in kids.

“I realize I can help a kid like this because I've been through this before and I know how it affected me as a player. If there was one regret I had as a player when my career was over, I wish I could I could go back and enjoy the game more because I was constantly living and dying with every at-bat, every game, ever slump, every high and low. You realize when you get into coaching that's not the way to play the game. You can't play the game that way if you're constantly worried about failure. I think it helped me as a young coach that to get the most out of young players, try to provide them with an environment that they enjoy.” 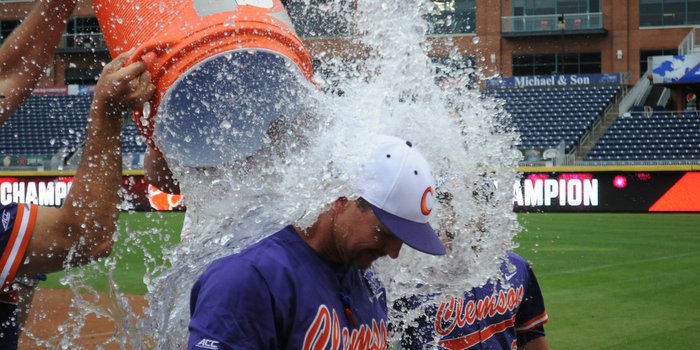 Lee gets doused by his players Sunday "

Lee said he wants his players to enjoy being at the ballpark and competing. Part of that is making sure they understand that no one remembers the individual accomplishments – or failures – as much as they remember what the team accomplished.

“They've got to enjoy coming to the field every single day. They have to look forward to being a part of the process,” he said. “They have to understand that they have to forget about their batting average and their ERA because at the end of the day it doesn't matter. I try to tell the team at the beginning of every year that nobody will remember what you hit this year. Nobody is going to remember what your ERA was this year, but everybody is going to remember if you win a championship and if you were part of a championship team. That's one thing that these kids on this team will remember. Nobody will remember that Seth Beer had an unreal freshman year and was ACC Player of the Year, but at the end of the day people are going to remember that he was part of an ACC Championship team.

“There's a lot of great storylines with this team, but I think at the end of the day these kids have enjoyed competing together and have bought in to it's a team game. We do this together, and it's a selfless group of guys. It is a loose and fun environment, and I've intended it to be that way and I want it to be that way. There's times where we have to be tough on them. There's times where we have some tough talks, but it's because we love them. As coaches, we love them, and we want them to be successful. It's about the guys, and it's fun to be a part of.”

Hall of Famer Earl Weaver was known almost as much for his legendary temper tantrums as he was for his championship teams, but don’t expect Lee to throw a bunch of helmets or bats onto the field, and don’t expect him to get tossed in a fit of rage.

“I'm older and wiser, I guess, as a coach than I was as a player. As a young coach, I was a lot like I was as a player. I've been tossed,” he said. “You can YouTube it, so I've made some mistakes. We've all made mistakes. More times than not, when I get angry, it's a mistake. As you get older, you learn from your mistakes. More times than not, when I lose my cool it winds up hurting us so I try my best not to do it. If I start to get frustrated or start to feel that blood boil a little bit, then I have to take a deep breath and realize, 'Hey, I have to keep my cool because these guys are relying on me to be relaxed and confident in pressure situations.' It's hard to do sometimes.

“There are times when something happens on the field - you guys have seen it happen this year where I could very easily get frustrated based on what's going on on the field, but I can't do that. I can't give the perception that I'm frustrated or that I don't have confidence in you on the field. I can't do that. Kids are going to look to me to see how I react to situations. I try my best to stay confident and cool, and I think it helps your ball club in the long run.”

Lee said he knows – from personal experience – that when a coach gets tight or frustrated, the team takes on the personality of its coach and plays tight.

“When coaches get aggravated or fired up in the dugout when something goes wrong, your team gets extremely quiet. I've seen that happen in my own dugouts over the years where if I get ticked off and throw a clipboard or lose my cool, your team is going to get quiet really quick,” he said. “That's only going to hurt your team because they're afraid to do anything. They don't know how to react once you get angry, or you get frustrated. I think it's a big part of it. I didn't often think that. I said well if they're scared of me then they're not tough enough, and that's the wrong approach as a coach.

“Kids want to please their coach; I know I did. I always wanted to please my coach. I always wanted to do things right so that he felt like I was doing everything I could to help our team win. I try to handle tough situations by being cool and calm and collected. If I have an issue I much would rather do it one on one with the player in privacy so I give him that respect. You don't ever want to show a player up on the field. You always want to show him that respect by bringing him in and talking to him one-on-one so that he can have a say in what's going on or if there's an issue so you can get on the same page. I just try to treat kids the way I would want to be treated.”