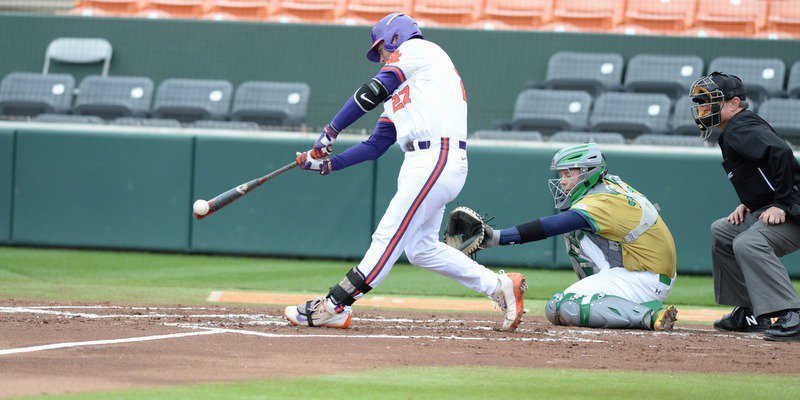 CLEMSON – Irish eyes weren’t smiling Sunday afternoon. They were too busy trying to figure out how to score a run against Alex Eubanks.

Eubanks pitched seven strong innings to improve to 2-1 on the season and Chase Pinder had two doubles as No. 9 Clemson swept Notre Dame 4-0 on a chilly, breezy day in Doug Kingsmore Stadium. Clemson has won six in a row and 11 of the last 12 and improves to 12-3 overall, 3-0 in the ACC.

Notre Dame falls to 3-11 overall and 0-3 in the ACC. The Fighting Irish scored just six runs on the weekend – one on Friday and five on Saturday.

Pinder, Andrew Cox and Weston Jackson all had two hits, while Robert Jolly drove in a run with a sacrifice fly.

"Great way to get ACC play started. I thought we did some really good things this weekend and today in particular," head coach Monte Lee said. "Alex Eubanks threw the ball very well. Ryan Miller was very good out of the pen. We only used six pitchers on the weekend, so our starters did a nice job and our bullpen did a great job. I thought we ran the bases very, very well today. I thought that was the difference for us. Offensively, Chris Williams got us started with a two-out hit after a walk from Jolly. Weston Jackson did a nice job on a hit and run. Overall, I thought our at-bats were pretty good. Our pitching staff was excellent. I thought we ran the bases very, very well. We found a way to get a sweep. Guys are playing good baseball right now and we just have to keep it going."

The Tigers struck first, getting a single run in the bottom of the first. With one out, Jolly walked on four pitches and promptly stole second. Seth Beer struck out for the second out, but Chris Williams lined a single to left that scored Jolly and the Tigers held an early 1-0 lead. 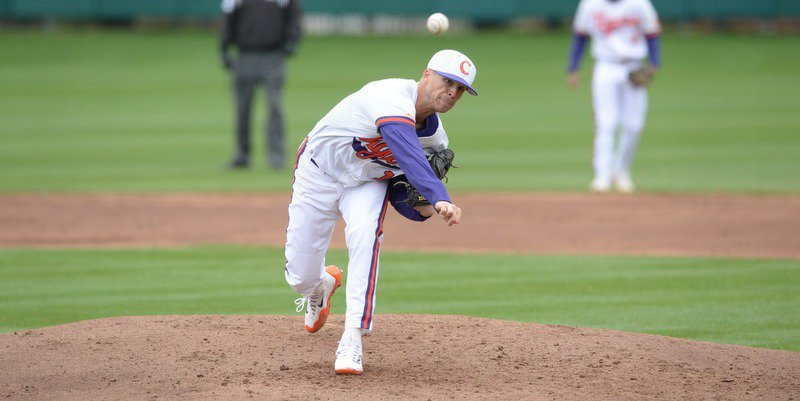 Pinder doubled with one out in the third, advanced to third on a wild pitch and came around to score on Jolly’s sacrifice fly to left for a 2-0 lead.

Cox singled with one out in the fourth and advanced to third when Weston Jackson lined a single to right. Cox scored on a wild pitch for a 3-0 lead, and Jackson moved up to second on the play. Another wild pitch moved Jackson to third, and he scored on a fielder’s choice grounder to first.

Eubanks pitched seven strong innings, giving up four hits, two walks and striking out seven while throwing 103 pitches. Eubanks lowered his ERA to 2.96 with the outing.

Lee said he was pleased with where his team stands after 15 games.

"If you look at it through 15 games and we're sitting at 12-3 and 3-0 in ACC play, would you sign for it? Sure. I think the thing for me is consistency," Lee said. "It's about showing up every day and trying to put together a great game, a great plan lineup wise, defensively, base-running - just trying to play complete baseball. I still think there's things we can do better, so we're definitely not content. We're happy with the consistency of baseball that we're playing, but I still think we have room to grow and play even better, but the leadership on our team is very good, our pitching staff has been outstanding. Andrew Cox and some of the older players on our team have done a nice job of leading our team and that's what it's going to take."

Clemson hosts Yale in a two-game series starting Tuesday. The games both days are scheduled to start at 6:30 p.m., but the Tuesday game time could be changed if Clemson hosts an NIT game in basketball. Clemson hosts Virginia next weekend in a showdown of Top 15 teams.

Clemson vs. Norre Dame boxscore
Get the latest Clemson gear right here!
Comment on this story