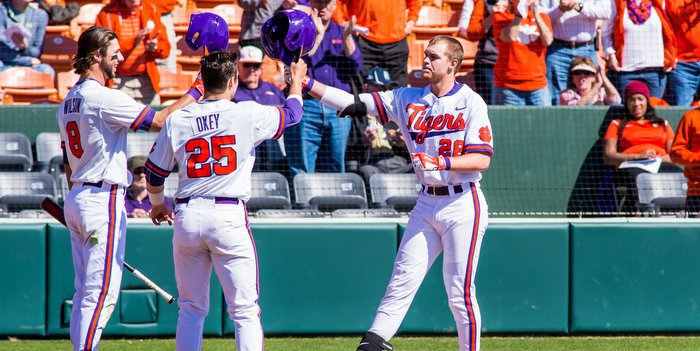 Brooks Crawford picked up the win (Photo by David Grooms)

Clemson improves to 5-1 with the win while James Madison falls to 2-4.

"Offensively, the middle of the order was the story for us," head coach Monte Lee said. "Eli White drove in two and scored two and Rohlman drove in three. Okey scored three runs and hustled on the bases to score some runs, and I thought that was big for us. Seth Beer had another great day, had three hits and scored two runs and drove in three. Overall, the middle of the order did an outstanding job."

Starter Jake Higginbotham gave up a leadoff homer to Adam Sisk to start the second, a no-doubter that gave the Dukes a quick 1-0 lead, their first lead in the series. It didn’t last long. 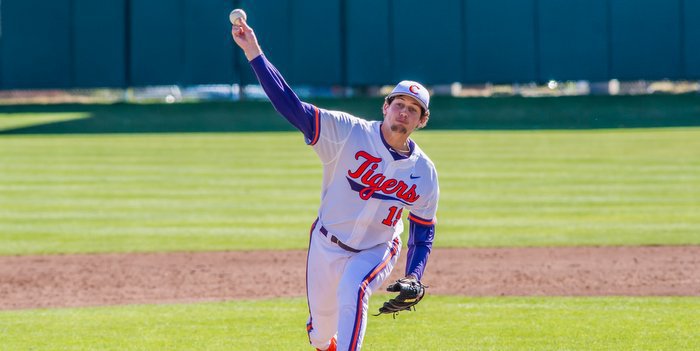 Brooks Crawford picked up the win (Photo by David Grooms)"

Okey led off the second with a walk on a 3-2 pitch, and Beer followed with an opposite-field laser into the Chapman Grandstands in left for his second home run of the season, giving Clemson a 2-1 lead.

"I was just trying to get a ball on the outer half of the plate I could drive the other way and move Okey over," Beer said. "That was my mindset right there, to just move him over. But I got enough of it and was able to drive it out."

Wilson followed that with another laser – this one off the knee of Dukes’ starter Brandon Withers. Withers lay on the mound for a few minutes in pain but was able to continue.

Wilson promptly stole second and moved to third on an infield single by Adam Renwick. Renwick stole second, bringing up Pinder. Pinder reached on an error by Chad Carroll, allowing Wilson to score for a 3-1 lead. Eli White then singled on the infield– another tough play for Carroll – scoring Renwick for a 4-1 lead.

Rohlman lined a 2-out double into left-center to score Pinder for a 5-1 lead, with White moving to third on the play, but Okey struck out to end the inning. ‘

Higginbotham ran into trouble in the fourth. A single, two walks and a hit batter contributed to Higginbotham’s troubles, and he was replaced by Brooks Crawford with the bases loaded and one out. Crawford gave up a fielder’s choice that allowed the second run to score but escaped further trouble with Clemson holding a 5-2 lead.

Higginbotham finished the day with 3 1/3 innings pitched, giving up two earned runs, three walks, three strikeouts two wild pitches and a hit batter. He threw 38 of his 64 pitches for strikes. Crawford replaced Higginbotham in the fourth and gave up no hits while walking one and striking out three.

However, the Tigers answered in the bottom of the inning. Renwick singled to center to start the inning, and Pinder sacrificed him to second. White followed that with a run-scoring double to left-center that plated Renwick for a 6-2 lead. White moved to third on a balk and scored when Rohlman dumped and RBI single into left for a 7-2 lead.

Okey reached on a fielder’s choice that forced Rohlman at second, but he reached second on a throwing error by the second baseman. That brought up Beer, who notched his third RBI of the day with a single to right that plated Okey for an 8-2 lead.

The Tigers continued to pile on in the sixth. White led off the inning with a walk, and he was moving on a 3-2 pitch to Rohlman, a pitch that Rohlman rifled into right field. White scored on the play, but Rohlman was thrown out trying to stretch his single into a double. Okey followed with a single to center, and he moved to third on a botched pickoff attempt at first. Beer walked to put runners on the corners, and Okey scored on sacrifice fly to center by Wilson for a 10-2 lead.

Andrew Cox pinch-hit for Chris Williams and tripled into the left-center field gap, plating Beer for an 11-2 Tiger lead at the end of six innings.

The Tigers host Wofford at 4 p.m. Tuesday at Doug Kingsmore in the first mid-week game of the season. Wofford has gotten off to an impressive start in 2016, with wins over Kentucky and George Mason.

Lee said the game against the Terriers will be a test.

"I don't know if there is a better state out there when it comes to college baseball," Lee said. "College baseball is incredible in our state. Wofford had a really good team last year and they've got a really good team this year. Todd Interdonato does an outstanding job of recruiting and developing and recruiting talent. They pitch and they love to run. They are a team that will take advantage of you if you don't control the running game. I can tell you right now that will be a tough test for us. We are coming off a sweep and we are coming into our first midweek opporunity against a really good ballclub. I am anxious to see how we do against a really good Wofford club"