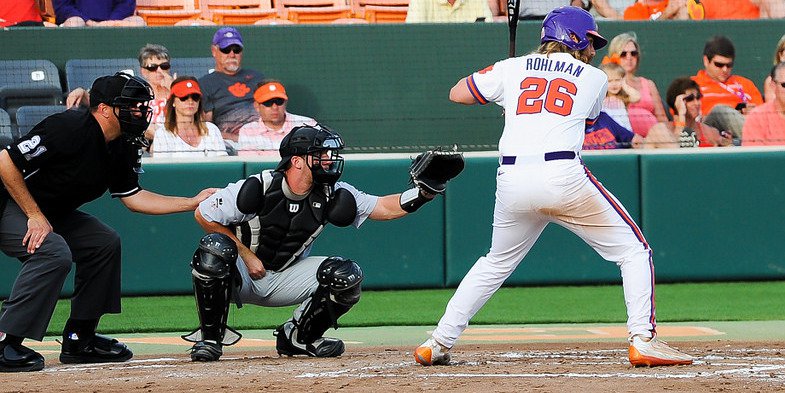 CLEMSON – A beautiful day at the ballpark turned out to be what the Tigers needed.

No. 8 Clemson used a four-run first and got stellar relief pitching for a second straight day as the Tigers

defeated Nevada 9-4 Monday afternoon a perfect spring day in Doug Kingsmore Stadium in the rubber match of a three-game series. The win was the 80th in the Clemson career of head coach Monte Lee.

Pat Krall pitched six innings, giving up four runs (three earned) in picking up the win and improved to 7-1 on the season.

Ryley Gilliam pitched the final three innings, picking up the save - his fourth of the season

Lee said after the game that the tandem of Krall and Gilliam was just what Clemson needed.

"Great job of pitching today by our guys. Pat Krall had a typical Pat Krall start," Lee said. "Even when you don't think he's quite at his best, he gives you six quality innings and that's all you can ask for in a game three. Very proud of Pat. And, then Ryley Gilliam, got him on the mound and extended Ryley today. He pounded the strike zone, no walks, three strikeouts. The one hit, he forced action in a 3-2 count, which is something I know (pitching coach See) Andrew preaches. I'm just really, really proud of Ryley. It's good to have him come in and do a great job for us."

The Tigers managed four runs in the bottom of the first, using five walks and only one hit to jump out to the big lead. Three walks loaded the bases with two out, and Robert Jolly walked on four pitches to force in the first Clemson run. Greene walked on a 3-2 pitch that brought in the Tigers’ second run, and Nevada starter Riley Ohl’s day was done. 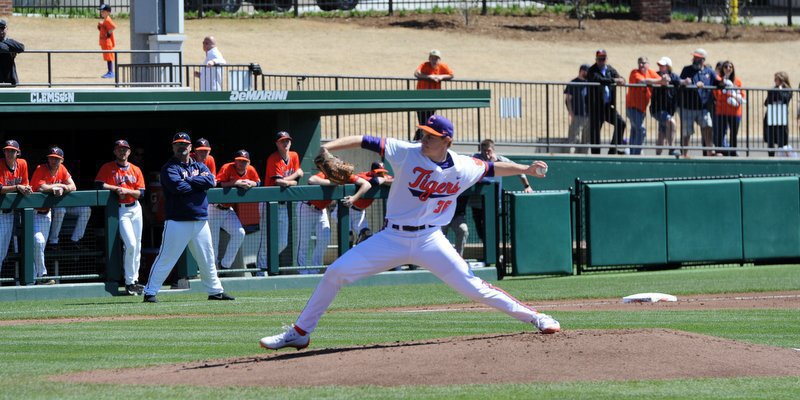 Ohl, pitching for the first time since April 15th, threw 34 pitches and only 10 strikes. Grayson Byrd greeted reliever Grant Ford with a two-run single, and Clemson led 4-0 at the end of the first.

Nevada scored a run in the top of the second inning, but Clemson added two more in the bottom of the frame. Logan Davidson started the inning with a single, Chase Pinder was hit by a pitch, and Seth Beer singled to load the bases. A balk and an RBI grounder by Andrew Cox scored two more runs and gave the Tigers a 6-1 lead.

The Clemson offense went into a momentary funk, but little-used catcher Kyle Wilkie stepped up. Greene and Byrd each singled with two out, and that brought up Wilkie, who is subbing for injured catcher Chris Williams. Wilkie was just 2-for-13 on the season and the Tigers were just 10-for-47 with runners in scoring position in their last six games, but Wilkie broke both streaks by mashing a two-run triple to right that made it 8-4.

Lee said he was happy to see Wilkie finally have some success at the plate, as well as a good performance catching.

"How about Kyle Wilkie? Hasn't played in quite some time and got a start. I thought he caught very well and threw a runner out," Lee said. "He had probably the biggest at-bat of the game - two strikes and hit the triple to right centerfield to drive in two. Just really, really proud of Kyle. He's a guy that works his butt off. The guys were cheering for him. I'm really excited for him. You can always tell how good a kid is based on how his teammates react to him having success and they were just thrilled for him today and that was great to see."

Rohlman led off the bottom of the eighth with a solo homer over the wall in right, his fifth of the season, to account for the final score.

Clemson returns to action Tuesday night, playing Furman in a game that will be held at Greenville’s Fluor Field.

Clemson vs Nevada Boxscore
Get the latest Clemson gear right here!
Comment on this story