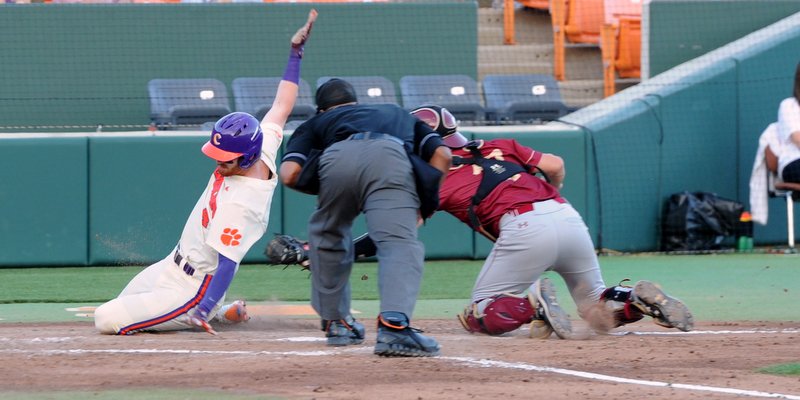 Rohlman had three more hits, including a home run, in leading No. 3 Clemson to a 7-2 midweek victory over the College of Charleston Tuesday night at Doug Kingsmore Stadium.

Rohlman extended his hitting streak to 19 games and is 16-for-25 in his last six games. He leads the Atlantic Coast Conference with a .413 batting average. Clemson improves to 34-8 on the season, while the Cougars fall to 20-21.

Tyler Jackson pitched seven strong innings in earning the win, improving to 7-1 on the season.

Clemson returns to action Friday, traveling to Chapel Hill to take on No. 4 UNC in a battle of ACC heavyweights.

"We got a great start out of Tyler Jackson. We only walked one guy, and it was there for us tonight," head coach Monte Lee said. "We played a really good game, especially defensively. I thought Jordan Greene made some nice plays, and Grayson Byrd made some nice plays in the infield. We swung the bats well and had quality at-bats out of every guy in the lineup. And Reed Rohlman continues to just tear the cover off the baseball. He is maybe the hottest hitter in college baseball right now. Maybe that will continue and hopefully that positive momentum will carry into this weekend."

Lee said Rohlman is having fun at the ballpark. 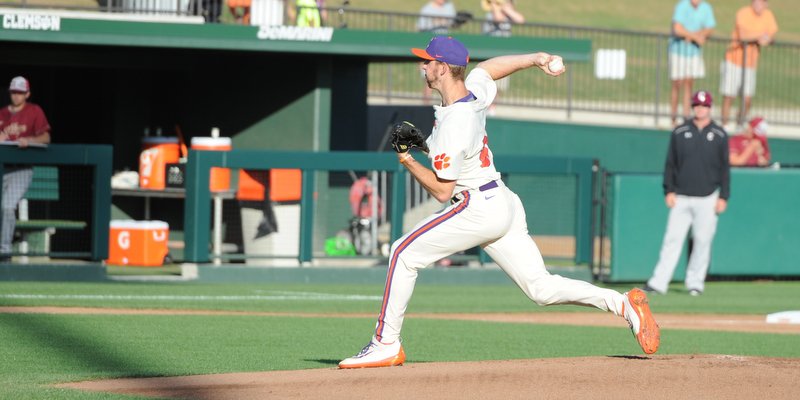 "He should be, especially when the ball looks like a volleyball coming in there," Lee said. "He is relaxed. He isn't pressing at all. He is seeing the ball pretty good, and anything that is up and over the plate he is hammering right now. And I am not messing with him right now."

It didn’t take Clemson long to put a dent on the scoreboard. Chase Pinder led off the bottom of the first with a hard-hit double to left field and scored on double deep into center by Rohlman. A single up the middle by Seth Beer scored Rohlman gave Clemson a 2-0 lead after the first inning.

College of Charleston answered in the second, however, to tie the game. Logan McRae hit a double down the left field line, advanced to third on a single by Erven Roper and scored on a wild pitch. Roper scored on a Joe Mundy single to tie the game at 2-2.

Clemson reclaimed the lead with a two-spot in the bottom half of the second inning. Andrew Cox led off with a single and advanced on a Robert Jolly walk. He scored on a single by Grayson Byrd that made it 3-2, and Rohlman doubled to deep left to plate another Clemson run and give the Tigers a 4-2 lead.

Back-to-back singles by Jolly and Greene started off the fourth inning for the Tigers, with both runners advancing on a bunt down the third baseline by Byrd. Jolly scored on a sac fly by Pinder, extending Clemson’s lead to 5-2.

The Tigers added a run in the sixth. Beer led off with a double into the gap in right-center, moved to third on a grounder and scored on a sac fly to left by Cox making it a 6-2 ballgame.

Rohlman added to his night in the bottom of the seventh, launching a 1-1 pitch deep into the Cajun Café for a 7-2 lead. The homer was his fourth of the season and it improved his batting average to .413.

Jackson was done after seven innings, giving way to Alex Schnell. Jackson gave up eight hits, two runs (both earned), struck out four and walked one.

Friday’s game at North Carolina will start at 6:30 p.m., Saturday’s game will start at 4 p.m. and Sunday’s series finale will begin at 1 p.m. All games will be televised by ACC Network Extra.

Clemson vs. Charleston box score
Get the latest Clemson gear right here!
Comment on this story