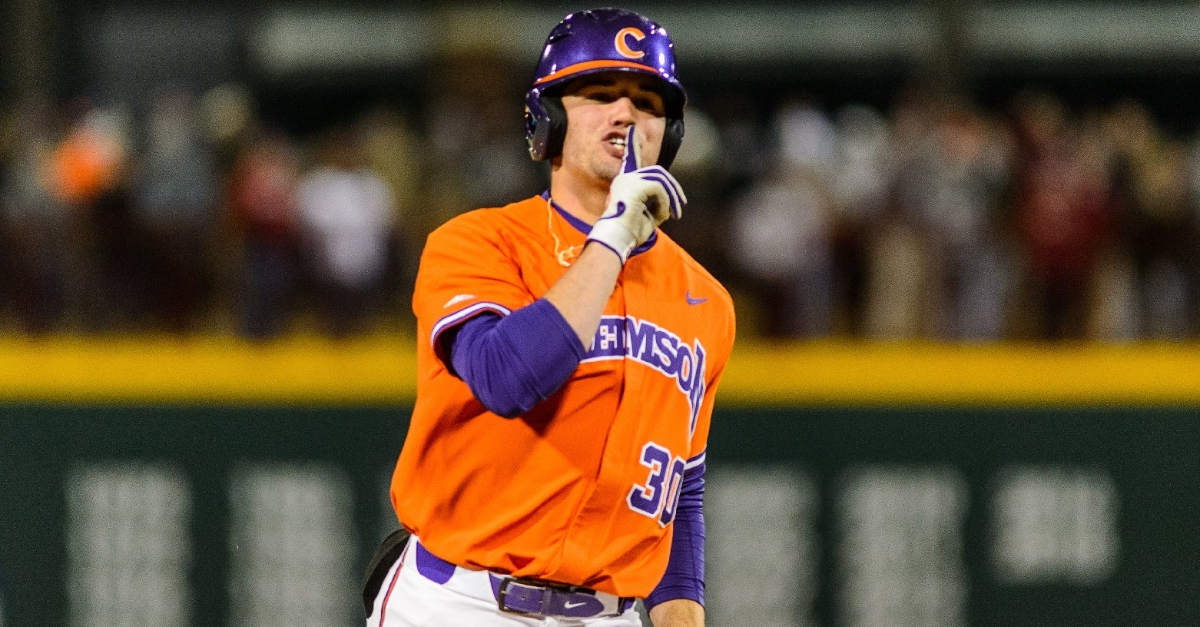 Clemson carried a no-hit bid into the ninth thanks to Sam Weatherly's big night. (Photo by David Grooms)

After six innings Friday evening at Founders Park, the Tigers had powered three balls over the wall -- and that combined with a dominant effort from junior left-hander Sam Weatherly to top the Gamecocks in game one of the three-site series, 7-1.

The cold night seemed to indicate an incoming pitcher’s duel with two aces on the mound -- South Carolina right-hander Carmen Mlodzinski sporting an 0.64 ERA through two starts and Weatherly countering with an 0.90 mark. And that appeared to be the case through three frames until Clemson catcher Adam Hackenberg lofted a double to left field in the fourth. Tigers freshman right fielder Dylan Brewer then powered his first career home run to right field to break the tie.

Clemson (8-1) used a similar recipe in the fifth with a Kier Meredith one-out double preceding a no-doubt shot to left-center from Davis Sharpe to double the Tigers’ lead.

Meredith got in on the action in the next frame with a runner already aboard, rocketing a 3-2 pitch to right-center and extending the Clemson edge to 6-0 for his first home run since the 2018 season.

"I don't know if you can explain it, quite honestly," Clemson coach Monte Lee said of the offensive explosion. "We all knew that it's there. We knew it was there. It was a matter of it happening. It's more about our guys. Our guys continue to believe. It's just a matter of getting a good pitch and being on time and putting a good swing on it and we certainly did it tonight." 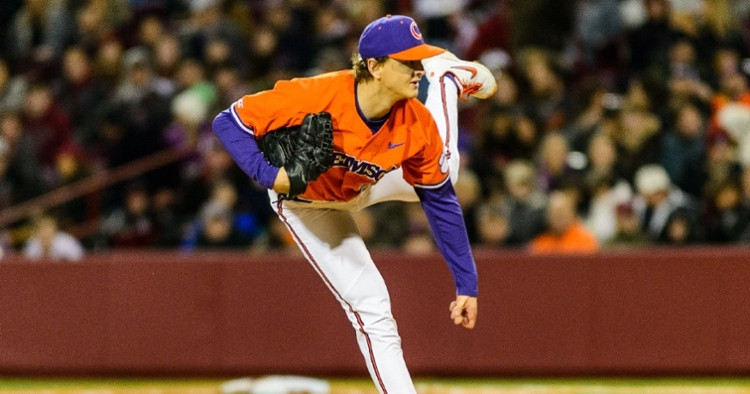 Clemson carried a no-hit bid into the ninth thanks to Sam Weatherly's big night. (Photo by David Grooms)"

In the seventh, Bryar Hawkins added some insurance with a two-out RBI triple.

"Tonight was huge," Meredith said. "I told you guys (the media) last week that I felt like the offense was getting ready to explode and on the verge of exploding. We had been putting together good at-bats all year. Tonight just showed what we can really do."

Weatherly (2-0) picked up where he left off from national honors last week (14 strikeouts in a win over Stony Brook) to not surrender a hit and allow only four Gamecocks on base in seven innings -- tallying 11 strikeouts to three walks (plus one hit batter).

Clemson carried a no-hit bid to the ninth but the Gamecocks (6-3) ended it in style on a solo shot to LF from Brady Allen off of freshman left-hander Geoffrey Gilbert.

The Tigers came into the game averaging only two extra-base hits per game, but Friday they totaled seven in all.

Meredith led the Tigers going 4-for-5 at the plate, scoring twice in addition to his two RBIs.

"Sam Weatherly was special and offensively the bats came alive tonight and we found a way to get the game one win here on the road," Lee said.

The win was a fifth for the Tigers in the series at Founders Park since the Gamecocks moved there in 2009.

Game two of the series stays in Columbia at Segra Park with a 3 p.m. start.