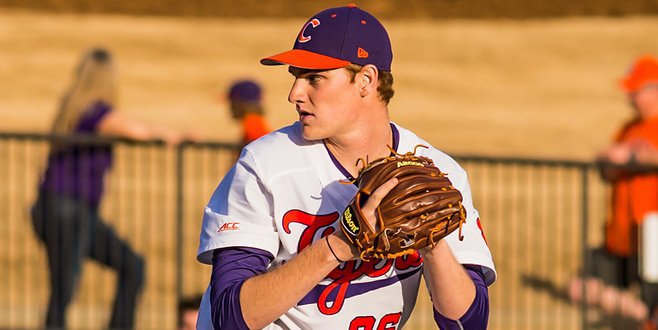 Krall wipes the shaving cream from his face Monday

CLEMSON – Next time Pat Krall gets a celebratory pie to the face, he prefers it to be chocolate instead of shaving cream.

The junior lefty pitched seven scoreless innings in giving Clemson a 7-3 win over Florida St. in Monday’s series finale, and to the victor come spoils – in this case a shaving cream pie to the face during Krall’s live postgame interview on ESPNU.

For Krall, the win was the biggest of his young career, but he told TigerNet after the game that with so much baseball left to be played this season he hopes there are many more memorable victories for him and his teammates.

“It's definitely the biggest win of my career, but hopefully, the next win is just as big,” Krall told TigerNet. “Hopefully, we can keep rolling and keep getting big win after big win.”

The Dowington (PA) native and Temple transfer knew his number would be called at some point Monday evening, and he was prepared to do whatever it took to help his team get the win, despite not having his best stuff.

“Today, I didn't have a live fastball or very good location consistently, so having a changeup and a slider that they were biting at, it's good because it opens up the fastball,” Krall said. “I don't have overpowering stuff, but it can look overpowering if I work off of my changeup and slider. A lot of guys, even if they know it's coming, they still try to chase it.”

With a nation-leading 0.68 earned run average over 52 2/3 innings and a 7-1 record, Krall might be used by Clemson head coach Monte Lee to fill a spot in the weekend rotation. If he’s called into duty, Krall said he will approach it just like every outing he’s had out of the bullpen. 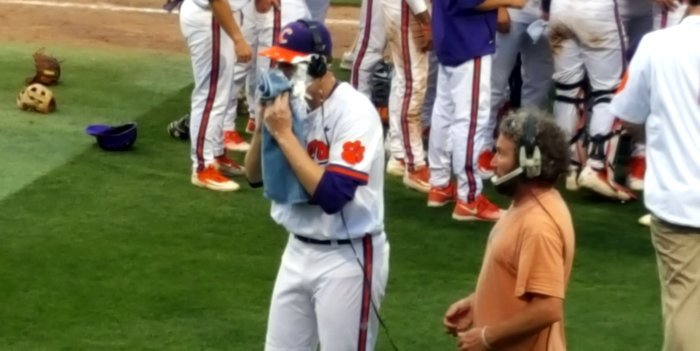 Krall wipes the shaving cream from his face Monday "

“I'm fine with that. Whether I'm coming out of the pen or starting, I just prepare every day to do whatever I have to do to be successful,” he said. “When they call my number - whenever that may be - I'm just going to do my best and give my team a chance to win. I've never started in college, so I don't know exactly what the different mindset is. I think if everyone prepares the way they can and just gets into their own routine the mindset can be pretty much the same. I think (Alex) Eubanks had success early on for both. Just finding your routine is the key.”

Going against No. 3 Florida State, Clemson’s back was against the wall, just as it will be for the remainder of the season, but Krall said he likes his team’s chances of competing against any team in the country.

“They're an unbelievable team, and we knew that coming in,” Krall said of Florida State. “We've been struggling the last three weekends, but I think we keep the mindset. We aren't tentative. We think we can beat this team. It doesn't matter what happened yesterday or what happened the last inning; we are a good team, and we can attack at all angles and win a game.”

If Krall keeps winning, he just might get that chocolate pie.