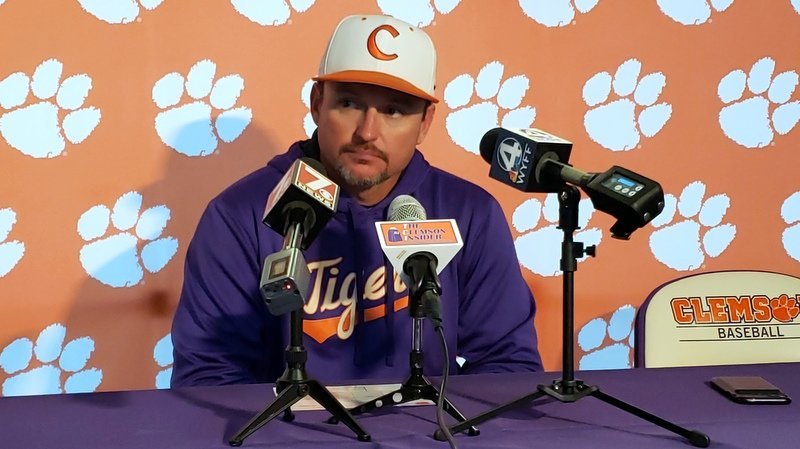 CLEMSON – Opening Day of the 2019 baseball season is Friday, and senior righthander Brooks Crawford is slated to get the start. The rest of the weekend will be on the freshmen.

Wrobleski was drafted by the Seattle Mariners out of high school (36th round) and is regarded as a top-40 freshman overall (38) and top-10 in the ACC (10) by Perfect Game. Sharpe was ranked the No. 7 freshman in the ACC by D1Baseball and was picked in the 34th round by the Pittsburgh Pirates.

Lee can’t wait to get started.

“It's game week. Just excited as we get closer and closer to Friday. Just looking forward to getting back with the guys,” Lee said. “We will do everything we can to get our team ready for opening day. Our guys are excited and health-wise we are in a pretty good spot. Guys are focused and ready to go, and they are tired of playing each other.”

Junior lefty Jacob Hennessy was an option for one of the weekend spots but will spend this weekend in the pen. He became the Friday starter in 2018 and has 102.0 innings pitched over 40 appearances (14 starts) and two seasons.

“He wants to start but I also think Jacob is one of the best teammates that you could ask for,” Lee said. “He understands that regardless of his role he is going to try and dominate his role and do the best that he can to help us win games. He has pitched out of the bullpen and he's started for us, so we certainly feel like he is going to pitch the first weekend, it's just a matter of when. He will be one of the first guys we will turn to out of the bullpen. He will be a very valuable piece for us.”

Lee said the coaches want to get the freshmen a planned approach.

“It was a very hard decision,” he said. “We felt like more than anything else, that Sharpe and Wrobelski from a stuff standpoint, they have starter stuff, they have velocity, they have three pitches and we would like to give them that routine of being a starter early in the season so that we can map out their week and plan out their week as opposed to giving them the call in the bullpen. We felt like more of a planned approach for those guys would be beneficial to them. We also feel like they are ready and their stuff is certainly good enough to compete as weekend starters.”

The Tigers open the season with three games against Alabama St. (Friday at 4 pm, Saturday at 3 pm, and Sunday at 1 pm) and play eight games in the season’s first ten days.

“It's a huge test, but one that we are pretty excited about. It's a lot of baseball in a short amount of time and it's certainly going to test our starting pitching and our bullpen,” Lee said. “We are going to have to use every weapon we have out of the pen in the first two weeks. We are going to get a chance to see what guys are able to do in a competitive environment.”