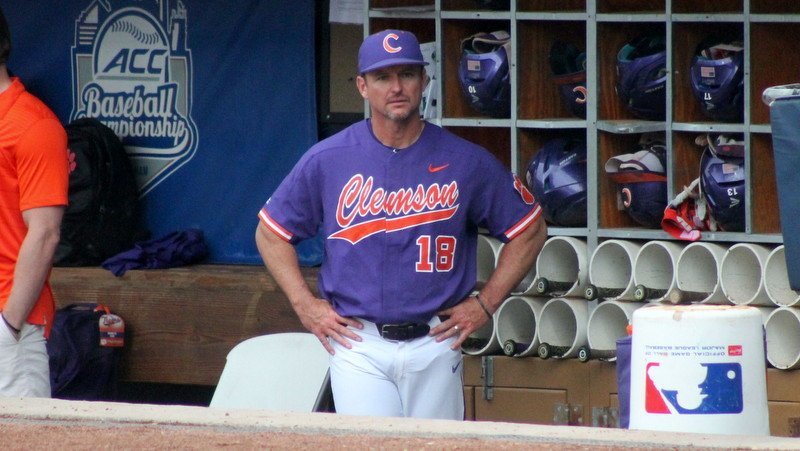 DURHAM, NC – Are the Tigers in the NCAA Tournament? Monte Lee thinks so.

Mat Clark took a perfect game into the eighth inning, leading Clemson past Louisville 7-1 on Thursday at the Atlantic Coast Conference Baseball Championship.

Clark struck out three and induced 13 groundouts to help the eighth-seeded Tigers (34-24) salvage a win at the tournament and send the top-seeded Cardinals (43-15) home after going 0-2.

“Well, tremendous win for our program. I think we all knew going into this game how big this game was for us,” head coach Monte lee said. “We couldn't have asked for a better start than we got out of Mat Clark, one of the best starts I've ever witnessed in my career as a coach. So he put our team, our program on his shoulders today against one of the best teams in the country, the ACC champion, and won the game for us.”

The win improved Clemson’s tournament resume. The Tigers are clearly on the bubble for the tournament, but Lee thinks the Tigers have done enough to earn a spot in the Field of 64.

“Well, I certainly think that we're in now. I think if you look at our record, thanks to Brian Hennessy, the best SID in the country who provides all of us with a lot of great information, he really does, so first off, I want to give him credit amongst his peers because he certainly deserves it. He works harder than anybody I've ever been around in sports information,” Lee said.

Lee then said Clemson is a better team than the record indicates.

“So I certainly think that we are a team that will be in the field of 64, and again, it was just a tremendous performance today by our team,” Lee said. “I've been saying it all year long, we've got a good team. We've been through a lot of highs, we've been through some lows, but at the end of the day, I think this win certainly solidifies us in the field of 64, and it's a brand new season for us moving forward.”

Clemson played loose and relaxed and Lee said that showed in the result.

“Yeah, you know what, what I saw today was a team that was pretty loose and very confident going into the ballgame. I tried to be as relaxed as I could be,” he said. “I feel like I've been on pins and needles and intense for the last month, so I honestly said maybe five words the whole game. I literally just said, you know what, this game is in the hands of our players. There's nothing that I can do at this point to try to get them to play their best baseball. It's up to them. So this game today was really about them. It had absolutely nothing to do with me. I literally just sat there and watched the game.

“And that's one of the things that you learn at the end of the day as a coach. You do make an impact on your guys, but at the end of the day when the lights cut on or in this case when Mat Clark toed the rubber, he put our team on his shoulders, we swung the bats well, we played good defense today, and we played like the team that I know we can be and we have been for a good portion of this season. So hopefully we can carry some good positive momentum into next week.”