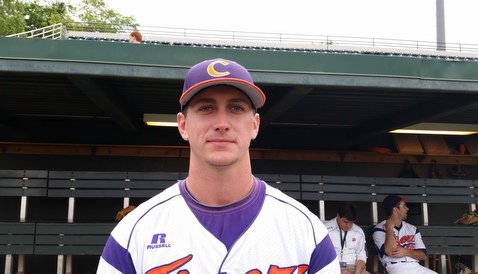 McGibbon said Saturday's hit was the biggest of his career

Jon McGibbon
Sr. 1st Base
#12 6-1, 220
Lindenhurst, NY
View Full Profile is no stranger to high-pressure situations and game-winning hits. It was just two years ago that he hit a walk-off grand slam to defeat Florida State in the ACC Tournament.

All the New York native needed was a chance to prove that he still had a little bit of “Clemson Magic” left on Senior Day.

Jack Leggett
Baseball Head Coach
View Full Profile and a spot in the starting lineup was just the spark the Tigers needed in a marathon 10-9 victory over Boston College Saturday afternoon.

Clemson trailed the Eagles 9-6with two outs in the bottom of the ninth when McGibbon stepped up to the plate and promptly lined a bases-clearing double to center field to tie the game at nine, and he said that as a senior he knew exactly how to approach the at bat.

“I’ve been in that position so many times in my career that it almost becomes second hand to me now,” McGibbon told the media at the Tigers victory I 13 innings. “It’s just a matter of staying calm and keeping your nose in check. I was able to battle, battle and finally able to find a pitch that I like at tie the game up.”

After Friday’s loss to the Eagles, Leggett brought McGibbon in to let him know his time was coming.

“I just talked to him yesterday and told him, ‘I haven’t given up on you and don’t give up on yourself. Keep you head in the game and I’m at that stage where I think we need start using you more,’” Leggett said of the meeting “There’s not a lot of separation between the first baseman that we’re using. I just tried to give him a vote of confidence because things can change quickly.”

He didn’t have to wait long for his opportunity as his name was penciled into the starting lineup for Saturday’s regular season finale, and McGibbon said that he was grateful for the chance to play in front of the home crowd one more time.

“It was great. No grudges held against anybody for what’s happened,” McGibbon said. “It is what it is with what’s happened for me personally, but it’s all about the team. Whatever I can do to help them win, I’m going to do it. I just take my opportunities and go in stride with them. I tell ya, I love this city and I love these people and I wouldn’t want to do I any other way but on this field.”

The game-tying double will go down as one of his favorite memories as a Tiger because it occurred in Doug Kingsmore.

“I have kind of been thinking about that after we won and I think this beats the FSU game,” McGibbon said. “Just doing it here and in front of our home crowd, there’s nothing better than that.”

“It’s all about finding the right spark at the right time,” he said. “This was a really big game for us. We came in here and we fought and backs against the wall we were able to get the job done.”