Alex Eubanks picked up his third win of the season

Weston Wilson and Chris Okey each hit a three-run homer as part of an 11-hit attack and two Clemson relievers didn’t allow a run as Clemson defeated No.3 Florida St. 10-3 Saturday afternoon at Doug Kingsmore Stadium in the first game of a three-game series.

Both teams had chances to score in the early innings, but Seth Beer was robbed of a two-run homer in the first to deny Clemson early runs and the Tigers turned three double plays behind Barnes to keep FSU off the scoreboard.

It was a two-out rally in the bottom of the fourth that broke the scoreless tie. Beer lined a single to right field – the Tigers’ first hit of the day – to start the rally. That brought up Reed Rohlman, who dumped a single down the left field line. The ball was misplayed and Rohlman wound up at second and Beer at third on the error. Wilson followed that with a launch to right-center for a three-run homer, his fourth of the season, for a 3-0 lead.

The Seminoles finally got to Barnes in the fifth. Three hits and a walk led to a run and a bases load situation, ending Barnes’ day with just one out in the fifth. He was replaced by Alex Eubanks, who gave up a run-scoring single to make it 3-2. The next hitter lofted a shallow fly to center for the second out, but a third run crossed the plate to knot the score at 3-3. Eubanks got a fly to right to end the inning but the teams were back to even. 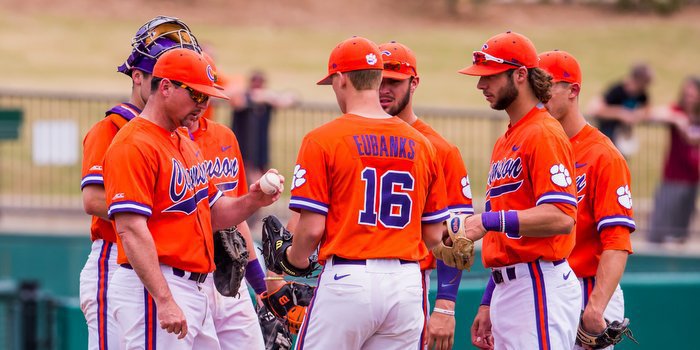 Alex Eubanks picked up his third win of the season"

Barnes didn’t factor into the decision and his day ended with 4.1 innings pitched, giving up three runs, all earned. He walked two and struck out three while throwing 82 pitches.

The Tigers threatened again in the fifth. K.J. Bryant led off the inning with a sharp single to left and he moved to second when Adam Renwick was hit by a pitch. Chase Pinder singled to right to load the bases, chasing Seminole starter Mike Compton. He was replaced by side-arm righty reliever Chase Haney, who struck out Eli White for the first out.

Okey delivered a two-run single down the left field line to score Bryant and Renwick for a 5-3 lead. Beer grounded out for the second out, but Rohlman walked to load the bases for Wilson. Wilson walked to force in a run, and Clemson held a 6-3 lead heading into the sixth.

The Tigers added another run in the seventh, a rally with Okey in the middle once again. Okey laced a single to left to start the inning and promptly stole second base. The throw went into center and Okey took third, and then scored on a single to right by Beer for a 7-3 lead. Beer advanced to third on a double by Rohlman, but play was halted at that point because of rain and lightning.

Play resumed at 5:40 p.m. after a 115-minute weather delay. Wilson hit the first pitch at the drawn-in shortstop and Beer was thrown out easily at the plate for the first out. Cox lined out to first for the second out and Bryant struck out to end the threat.

Brooks Crawford came in to start the eighth inning without allowing a hit, and the Tigers put the game away in the bottom of the inning. Jordan Greene pinch-hit for Renwick and doubled to start the inning and stole third. Pinder walked and moved to second on White’s fly ball, leaving Okey to clear the bases. He launched an 0-2 pitch into the Chapman Grandstands for a 10-3 Clemson.

Game two is scheduled for 1 p.m. Sunday at Doug Kingsmore.

Clemson vs. Florida State Photos >>
Clemson vs. FSU game one box
Get the latest Clemson gear right here!
Comment on this story