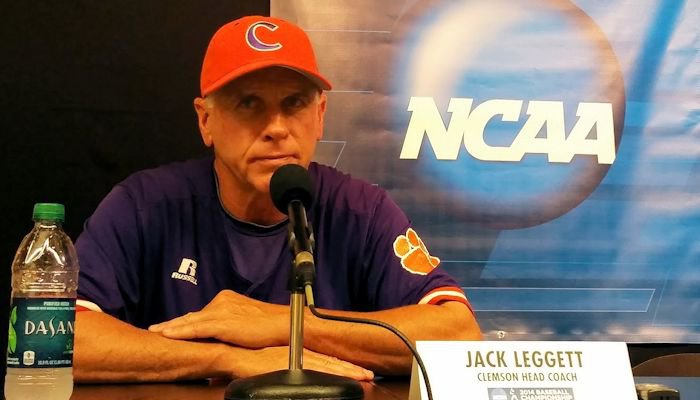 NASHVILLE, TN – Clemson has been eliminated from further competition.

Those words were uttered by the public address announcer at Hawkins Field, a stinging yet fitting eulogy for a baseball team that failed to live up to preseason expectations.

Following Clemson’s 6-4 defeat and ouster from the NCAA Tournament at the hands of Xavier Saturday afternoon at Vanderbilt, the questions regarding head coach Jack Leggett

Jack Leggett
Baseball Head Coach
View Full Profile ’s future at the school were a given.

The loss gave the Tigers an 0-2 record in the tournament, the first time a Clemson team hasn’t won a tournament game in its last 26 appearances, and it also marked the first time in Leggett’s tenure that a group of seniors failed to make an appearance in Omaha at the College World Series.

Since their last CWS appearance in 2010, the Tigers haven’t played in a Super Regional and haven’t hosted a regional at Doug Kingsmore since being beaten twice by Connecticut.

During Leggett’s postgame press conference underneath the stadium, Leggett was asked if he is confident he will be back to coach the Tigers next spring, and he answered the reporter’s question with a glare before answering that he didn’t know the answer.

“Am I fully confident that I’m going to be back coaching next year? I’d like to tell you that’s a ridiculous question,” Leggett said. “I’ve been here for 21 years and have a track record that’s pretty good. I’m sure we’ll sit down and talk about it.”

After a long pause, he finished the question by saying, “I would hope so. “

Leggett was then asked if the future of the program is bright enough to keep the Clemson fans enthused.

“The future is always bright for this program,” Leggett said. “It has been one of the top programs in the country for a long period of time. I haven’t lost any confidence in anything that we do. Everyone looks at our program on the outside looking in. Five percent of your fan base is always unhappy about something, but people who know what our baseball program is all about and people who look at our program from the outside and know college baseball, know that as a coach we have strong, traditional prideful baseball program. Not many programs have been in the NCAA Tournament 20 out of the last 21 years, been to nine Super Regionals and been to Omaha six times during that span. I would think that the future is always bright for us. We just have to continue working hard.”

Leggett said that like Clemson fans, he is disappointed in the season’s results.

“I’m a little disappointed. I go into every season thinking that we are going to get to Omaha like everyone else does that follows our program,” he said. “I don’t feel like that for whatever reason we ever had everybody gelling at one time, playing as well together that I thought we could. For some reason, we showed flashes of brilliance here and there were flashes of not so good. We never really broke through and got that consistent mojo that I thought was going to happen for us. We saw it at different times. We had some big games at different times. We did good things at different times. To me, it’s a little disappointing. I’m always disappointed when we don’t win the last game of the year, it’s just the way I’m wired up. “

He then said that as of right now, he doesn’t have the answers on how to fix the issues.

“We had different things happen to us during different times of the year – when we weren’t hitting, we were pitching exceptionally well or we would hit and not pitch well, sometimes we would pitch well at the beginning and not pitch well in the middle of the game, sometimes we played really good defense and sometimes we didn’t play as good of defense as we needed to play. The little combination of things during the course of the season is the main thing that jumped out at me was there was something every day that we couldn’t quite put it all together. I’m hoping the experience of this and the motivation of this will turn into something positive next year.”