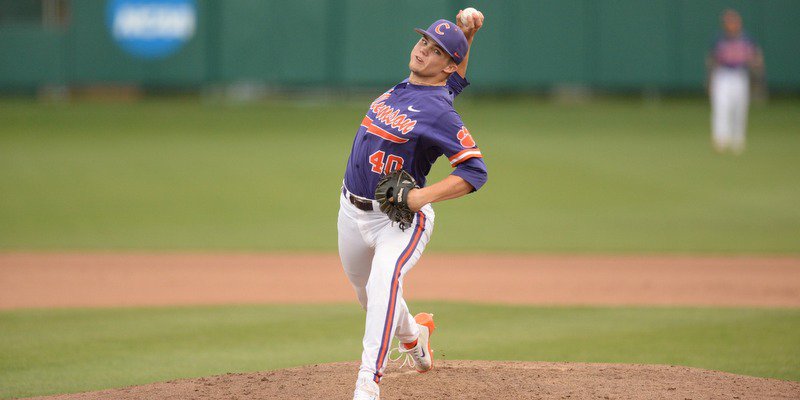 Jake Higginbotham should be healthy next season

CLEMSON – Monte Lee’s third Clemson baseball team will be young next season, and Lee will depend on freshmen and underclassmen to lead the way.

Lee is 86-41 overall at Clemson, with an ACC Championship, two 40-win seasons and has hosted two NCAA Regionals in his two years with the Tigers. The 2017 season, however, will feature a young roster, especially on the pitching staff.

Lee and pitching coach Andrew See lose all four starters from last season – Alex Eubanks, Charlie Barnes, Pat Krall and Tyler Jackson – in what amounts to over 400 innings of experience headed to the professional ranks.

Lee anticipates players like Jake Higginbotham, Brooks Crawford, Owen Griffith, Ryan Miller and a few others to battle newcomers Sam Weatherly and Spencer Strider for the starting spots and the competition starts in the fall.

One of the first pitchers to get a crack at the weekend rotation is Higginbotham, who made seven starts in 2016 before his season ended with an arm injury. He missed all of 2017 but should be ready to go by fall camp.

“Higginbotham should be at 100 percent by now as far as being able to throw,” Lee said. “He tore his lat. We felt like it was going to be a three or four month recovery time and he was unable to do anything throughout the spring. He should be right on track for the fall to begin throwing for us. That's a big piece for us, and we feel like he can be a viable option for us next year.” 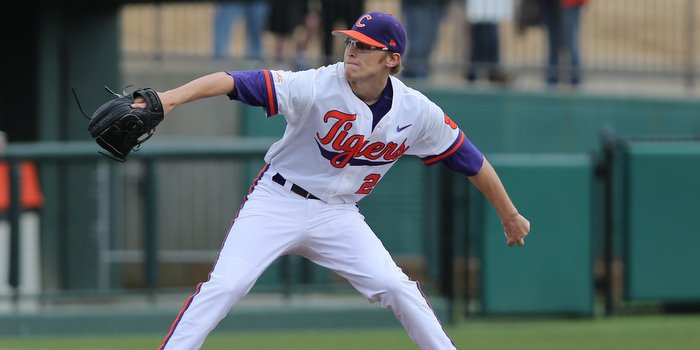 Jake Higginbotham should be healthy next season "

Another player who will get a long look is Miller, who pitched well earlier this season.

“A healthy Ryan Miller is a guy you can use in a number of different roles. We used him out of the bullpen just because of his pitch count,” Lee said. “He wasn't in a position to throw a high number of pitches. He was 10 months post-Tommy John surgery when the season started, Unfortunately for us in the Georgia Tech series, he threw on back-to-back days for the first time and experienced some discomfort in his elbow. He had an MRI and it didn't show anything, and they felt like it was inflammation in the elbow from the previous injury.

“At that point, we shut him down for one month to let the inflammation calm down. We feel like he is going to be healthy. If he is 100 percent, that is a big arm. That's a guy that can pitch up to 95 MPH, pounds the strike zone and is one of the best athletes on the team. We might try and develop him as a starter just to see how that goes, in the fall. That will be a big point of emphasis for us in the fall is who is going to be able to start. We lost about 400 innings of starting pitching - that's tough to say. We are going to take pretty much every guy on our staff in the fall and start them and see who we can develop and turn them into starters.”

Incoming freshman Sam Weatherly and Spencer Strider will also get a shot. Weatherly was rated the 350th best prospect by Baseball America, 170th by Perfect Game and 57th among high school players by Prep Baseball Report heading into the recent amateur draft. He was 6-2 this season with a 0.83 ERA, striking out 78 in 50 innings.

Strider was named the 2016-17 Gatorade Tennessee Baseball Player of the Year after posting a 13-0 record this past season with 150 strikeouts. Strider held opposing hitters to a .118 batting average and averaged 13.9 strikeouts per seven innings.

“Sam Weatherly is a very talented player. He is a left-handed pitcher with a great breaking ball,” Lee said. “He can run. Left-handed hitter. He will play the outfield and play first base as well. We are going to pitch him and play him in the field in the fall and try and develop him as a two-way player. Spencer Strider is a right-handed pitcher who touched 96-97 some in the spring and has a really fast arm.”

Once the team convenes for fall camp, the coaches will give every pitcher a chance to prove he can be a starter, and Lee has no idea who will come out on top.

“It's hard to say this far out. We have some guys that are going to be a little more unproven in that starting role,” Lee said. “We will get the best Higginbotham in the fall because he wants to be that No. 1 or No. 2 starter. We all saw what Owen Griffith can do. He had some injuries and we were really just seeing what he could do once the season started. We all saw at the end of the year what he is capable of. He will be in that mix. You have to throw Weatherly and Strider in there in that mix. One of those guys will be in the mix there. Brooks Crawford will be in his third year in the program and will be in that mix. Jacob Hennessy might be an option as a starter. Ryan Miller. We might even try and develop Ryley Gilliam as a starter again.”