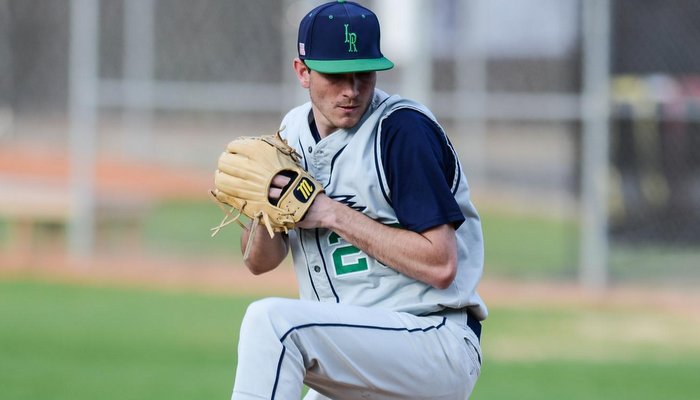 Papp goes to the windup earlier this year

Papp, once committed to N.C. State, will be eligible to play for Clemson this season and becomes the 10th commitment secured by head coach Monte Lee

The 6-4, 200-pounder led the Leesville Road pitching rotation to a 4A Cap-8 Conference Championship in the 2015 season and four games deep into the playoffs. He posted a 7-2 record with a 1.21 regular season ERA, a post season ERA of .933, allowed only six earned runs during the regular season and had 70 strikeouts versus 19 walks in 62 innings of work. Papp was the 4A Conference Pitcher of the Year, NCHSCA All Star Team Selection, 4A Cap 8 All Conference and Golden Spikes Award winner.

Papp sat down with N.C. State head coach Elliott Avent Thursday to explain his decision and why he chose to attend Clemson rather than N.C. State, and he said that new head coach Monte Lee helped swing the tide in the Tigers’ favor.

“Shortly after the MLB Draft, I was able to open up my commitment at NC State since there was administration delays in getting my NLI finalized,” Papp told TigerNet. “I was truly blessed to have a lot of offers to consider, I think I ended up getting four D1 offers and a few JUCO's in about 10 days. Every coaching staff that I met had amazing characteristic and I often felt humbled in their presence. That said, my dream has always been to play in the ACC and that meant NC State or Clemson and you really can’t make a wrong choice when it comes down to those two options.

“When Coach Lee had me down for a visit to Clemson, after I threw for Post 1 Legion Ball in Florence it was really something special. I was so comfortable talking with him. We even joked about doing it right with the lifted golf cart and it felt like we were both learning about the Clemson campus. I actually stopped by two summers ago when the field was all torn up and the new player lounge was just getting started. It is really going to be one of the best facilities in the country and really makes a statement about what a great place Clemson is. “

Papp said that Lee made the extra effort to see him pitch.

“Everything I have read or heard about Coach Lee from MLB Scouts and other coaches was all true,” Papp said. “He is a real players coach, cares about each of them and actually tries to find every player, every day, to just check in and that really wowed me. He also already knew a lot about me and so did his staff as they have seen me throw. Instead of getting right down to business, which he said he was ready to do, he wanted to come to Raleigh where I had a game two days later to see me and meet my Mom. I thought, with everything this guy has going on right now, he is going to drive 4 1/2 hrs to Raleigh and then back to Clemson just for me - that is really something.”

As a result, Papp said he knew Clemson was where he needed to attend school and pitch.

Papp’s announcement to attend Clemson had to wait until he told N.C. State head coach Elliott Avent of his decision.

“Out of respect to NC State, I waited before I publicly announced my commit to the Tigers so I could sit down face to face with Coach Avent and discuss my decision,” Papp said. “He is a really great coach and person and I look forward to continuing my relationship with him. After sitting on a stadium bench for almost an hour, he said, ‘I don’t like it but understand your decision to go to Clemson.’ Then with a smile he said, ‘I really, really hope we don’t see your best stuff when we play you.’ He is a really good guy.”

And to think he showered in the rain with ice water yesterday and now he signs with Clemson. @AndrewPapp0 congrats pic.twitter.com/8ZsgmAjaVT