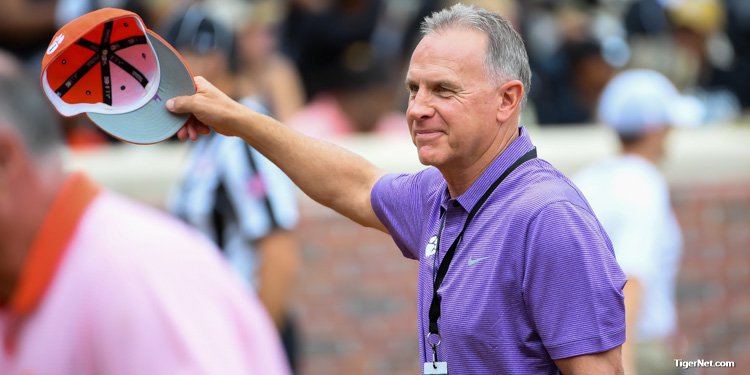 Leggett waves to the crowd during the ceremony Saturday

Former Clemson baseball head coach Jack Leggett was honored by the university during Saturday's home game against Wake Forest, and Leggett reached out to TigerNet with a letter for the fans.

Leggett was recognized for his achievements at Clemson as an honorary alumnus during a ceremony during the 28-14 victory over Wake Forest. Leggett received a warm reception from the Homecoming crowd and wrote the following letter to the fans.

To the Clemson Fans!!

Thank you so much for your warm reception for me and my family at Saturday's homecoming football game while receiving an Honorary Alumnus Award. The enthusiastic and loud ovation warmed my heart and reminded me again of our mutual respect and the great memories we have together. The 24 years of passion exhibited by you and along with our baseball program was always a great mix and recipe for success! Your love for Clemson, our baseball program, and appreciation for how we ran it is mutual in how I feel about you and how you supported us. I have deep respect for your passion, loyalty, and support and that is truly what makes Clemson special. I miss being your coach, miss competing for you, but always will cherish the great moments we have shared! Thank you once again for providing another great moment and memory for me and my family on Saturday! Much respect!

Leggett waves to the crowd during the ceremony Saturday "

Leggett became Clemson’s 26th head coach in 1994, following the 36-year tenure of Bill Wilhelm. With 477 wins at Vermont and Western Carolina, Leggett’s 1332 overall wins rank him 10th all-time among Division I baseball coaches and fifth among active coaches. Before taking the reigns in 1994, the South Burlington, Vermont, native served as the recruiting coordinator and assistant head coach under Wilhelm in 1992 and 1993 and was a major contributor to teams ranked in the final Top 20 and advanced to the NCAA Regionals. In 1993, the Tigers captured the ACC Tournament title.

After taking over as head coach in 1994, Clemson won the ACC regular-season title and went on to win the conference tournament title. The following year, the Tigers repeated as ACC regular-season champions and won the NCAA East Regional title. The 1996 season brought Clemson another NCAA Regional title and a second-consecutive berth to the College World Series and in 1999, Clemson won four games in two days to capture the Fayetteville (Ark.) Regional. In 2006, the Tigers captured the Atlantic Division title with a 24-6 record and won the ACC Tournament Championship.