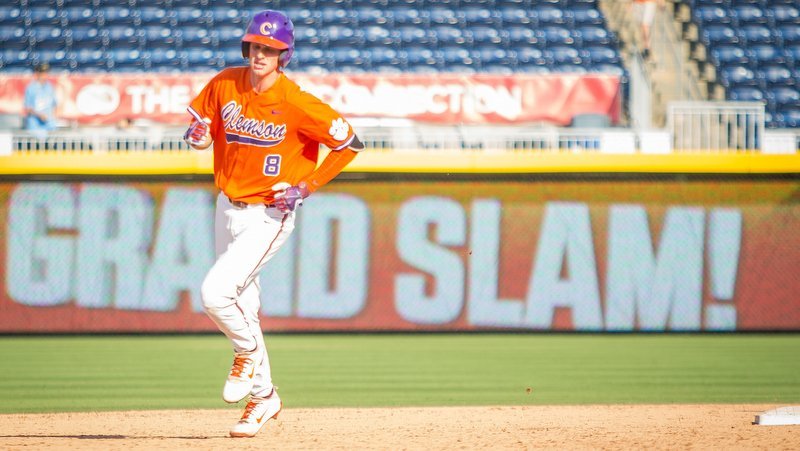 DURHAM, NC – Clemson came back from the lightning delay and found lightning in its bats, followed by a hailstorm of baseballs across Durham Athletic Park.

Trailing 3-0 heading into the third, Clemson scored a single run in the third and 17 in the fourth in blowing past Notre Dame 21-4 in pool play in the ACC Baseball Championship Wednesday. The game was called after seven innings due to the NCAA 10-run rule. Clemson and Miami play Thursday at 7 p.m. The winner of that contest advances to Saturday’s semifinals. Clemson improves to 44-13 on the season, while Notre Dame falls to 24-30.

The last time the Tigers played in Durham Bulls Athletic Park, they scored 18 runs against Florida State in a rain-plagued game to become the 2016 ACC Champions. 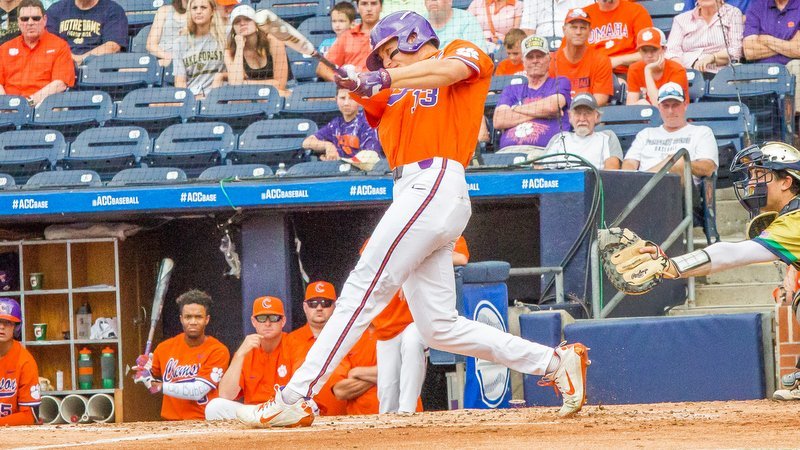 "Well, obviously the fourth inning was good to us. From time to time you see those types of things happen," head coach Monte Lee said. "You know, as a head coach, it's a lot of fun to watch your guys put together that many quality at-bats in a row and you can see that momentum just building and building in that inning. But we've also -- we've all been on the other end of it, too. The one thing that I felt like we did a really good job of is even though we put together the fourth inning where we scored so many runs, I felt like we had good at-bats after that, too. I didn't think that we let the score dictate how competitive we were with our at-bats and on the mound and defensively after that. We continuously talk about playing every pitch of every ballgame, respecting the game and playing the game the right way, and I felt like we did a good job of playing a complete game today. But offensively we were very, very good."

The Irish struck early against Clemson starter Spencer Strider. An early base hit was erased after the runner was thrown out trying to take second, but a single and a two-run homer by Matt Vierling, his 10th of the season, gave the Irish a 2-0 lead.

The game went into a 42-minute lightning delay after the Tigers hit in the top of the second, and Strider came back out to start the bottom of the frame. A single, a double and a sacrifice fly plated another Irish run and Notre Dame led 3-0 after two innings.

Clemson finally got on the board in the third. Justin Hawkins led off the inning with a double, and Sam Hall was hit by a pitch. Jordan Greene bounced into a fielder’s choice, forcing Hawkins at third, and Logan Davidson struck out for the second out. Wilkie delivered a two-out, run-scoring single to center to score Hall and make it 3-1 Notre Dame. Seth Beer struck with runners on the corners to end the frame.

Strider issued a walk to lead off the bottom of the inning, and he was removed in favor of Mat Clark. Two errors later – a fly ball dropped by Beer and a fumbled grounder by Greene – the Irish had the bases loaded with no out. However, Clark got a strikeout and a double play to end the inning and the score stayed at 3-1.

Strider pitched two innings, giving up four hits and three runs (all earned) while striking out two and walking two.

The Tigers chased Notre Dame starter Cameron Brown in the fourth and did it with the biggest Clemson inning in ACC tourney history. Williams led off the inning with a walk, and Cromwell and Drew Wharton each singled to load the bases with no out. Hawkins drove a ball deep into right-center for a sacrifice fly, scoring Williams and moving Cromwell to third with one out. Brown was replaced by Zack Martin, who faced Hall with runners at the corners with one out.

A wild pitch moved Wharton to second, and Hall walked on a 3-2 pitch. The ball bounced away from the catcher and Cromwell raced across the plate with the tying run. Wharton moved to third on the wild pitch and Hall ran all the way to second. Greene laced a single over shortstop to score both runners and the Tigers led 5-3.

Davidson made the Irish pay, launching a 2-1 pitch over the wall in right-center for his 14th homer of the season, giving Clemson a 7-3 lead. The Tigers weren’t done, however. Wilkie singled to right field and Beer launched a two-run shot down the line in right, his 20th of the season, and Clemson led 9-3.

Williams singled and advanced to second on a wild pitch after Cromwell flew out for the second out. The Tigers added nine more runs with two out. Wharton walked and both runners advanced on a wild pitch, followed by a Hawkins walk. Another wild pitch scored Williams to make it 10-3, and two more walks pushed in a run that made it 11-3.

That brought up Davidson, who smacked a grand slam way over the wall in left for his second homer of the inning, one from each side of the plate, and Clemson led 15-3. Wilkie singled and Beer doubled to put runners at second and third, and Williams cranked a three-run shot off the bull in left to make it 18-3.

Davidson admitted he was looking to homer in his second at-bat in that inning.

"Well, in that second at-bat right-handed, bases were loaded, so I was kind of expecting off speed at some point.," Davidson said. "I didn't get it earlier. I mean, I got it later than I thought, fastball, took a good hack at the first one. Second one was kind of right there, but I was, again, looking off speed, so he kind of got me there. And then I finally got that curveball. He just kind of left it up, and I took a good hack at it, and it went out. I think it hit a table or something, I don't know."

The Tigers added a single run in the fifth and added two more in the sixth to account for the final score.

Clemson vs ND Boxscore
Get the latest Clemson gear right here!
Comment on this story