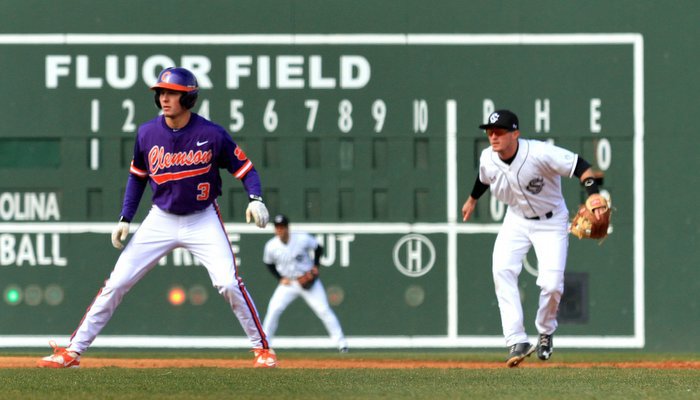 Tyler Krieger has six multi-hit games so far this season

GREENVILLE – Clemson’s bats were as cold Saturday as they were hot on Friday.

The Tigers pounded out three home runs in an 11-4 win over South Carolina at home on Friday but managed just seven hits and one run as the No. 10 Gamecocks evened the Reedy Rivalry series with a 4-1 victory at Greenville’s Fluor Field.

Clemson (6-3) was 5-for-12 with runners in scoring positions and had two two-out hits Friday night at Doug Kingsmore, but was only 3-of-13 and had no hits with two outs and stranded eight in Saturday’s loss

Like they did on Friday, the Tigers got on the board in the first. Reed Rohlman

Tyler Krieger
Jr. Infielder
#3 6-1, 170
Johns Creek, GA
View Full Profile followed that with a double that skipped over the third base bag and into left field for a run-scoring double and 1-0 lead.

The Gamecocks got to starter Zack Erwin

Zack Erwin
Jr. LH Pitcher
#33 6-5, 195
Duluth, GA
View Full Profile in the bottom of the second, plating three runs for a 3-1 lead. In the bottom of the third, South Carolina didn’t hit the ball hard but hit it in the right spot to score another run for a 4-1 lead through the first third of the game.

Erwin settled in after the third inning and continued on to pitch six-and-a-third innings and giving up four runs – three earned – on seven hits and striking out five.

Clemson missed a golden opportunity to get back into the game in the sixth. South Carolina starter, Wynkoop, had retired 15 of 16 batters before giving up back-to-back walks and a bloop single to Duggar with one out. With the bases loaded, however, Chris Okey

Weston Wilson
So. Infielder
#8 6-3, 195
High Point, NC
View Full Profile grounded out to third to end the threat as the Gamecocks held onto their 4-1 lead.

The Tigers loaded the bases again in the seventh only to come up empty again. Chase Pinder

Chase Pinder
Infielder
# 6-0, 165
Poquoson, VA
View Full Profile reached second on an error by the third baseman and advanced to third on a single by Andrew Cox

The teams will conclude the series Sunday at South Carolina at noon.