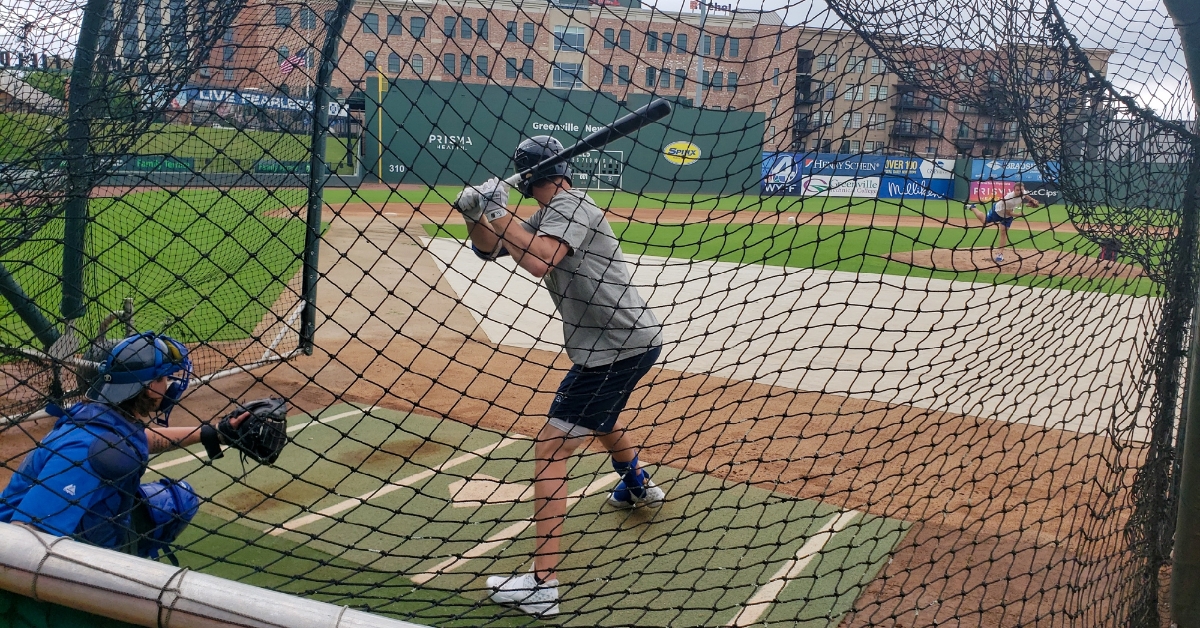 GREENVILLE – The ball came out of Colorado Rockies pitcher Daniel Bard’s right hand with ease, and then rose as it neared the plate. Former Clemson shortstop Logan Davidson, already in a 1-2 hole, stuck his bat out and caught just enough of the ball for a foul tip. As Davidson grinned out at Bard, the pitchers all standing behind the cage laughed in knowing appreciation.

The ongoing COVID-19 situation caused Major League Baseball to shut down in mid-March and send all of the major and minor league players home. There is hope that the sport will announce a return soon, and with that in mind several professional players are gathering at Fluor Field a few times a week to get back in game shape.

Davidson was selected by the Oakland A's with the 29th pick in the first round of the 2019 MLB Draft, and spent last season at High-A Stockton in the California League. He played in 54 games and hit .239 and hit four homers with 12 RBI as he transitioned to the wooden bat and says he was shocked when baseball was shut down for the spring.

“After hearing about the virus going on, it's not your first thought is that the whole country is going to shut down and you're going to go back home with no baseball and no sports,” Davidson said after Monday’s session. “That definitely caught me by surprise. But at the end of the day it is what it is and we are in it together and we are trying to get back out on the field, assuming an agreement is coming soon. Everybody wants us back out there so we are looking forward to it.”

White played 116 games for the AAA Nashville Sounds last season, hitting .253 with 14 homers and 43 RBIs. White was a non-roster invitee to the Texas Rangers’ training camp when baseball came to a standstill.

“I was in Surprise, Arizona for spring training. We had an off day and I got a text saying spring training was postponed,” White said. “Within a few days I was sent home. So it happened pretty quick.”

Once White learned about the live BP at Fluor, he was quick to join.

“It's great. We were in game-ready shape before all this happened so this is great to try and stay as prepared as possible. It's a huge advantage for us,” he said. “It's exciting. This is not where we want to be at the end of May. I think everyone is antsy and hoping everything turns around quickly. It's weird - I actually went to the beach a few weeks ago, and it was the first time I had been to the beach in the summer in a long time. It's definitely different but I hope we will be back out there soon.”

Davidson said the names and faces are familiar.

“These hitters are pretty much the ones I hit with over at Clemson. They live closer to here and it just started up. The access to the field is huge,” Davidson said, thanking Clemson alum and Greenville Drive General Manager Eric Jarinko. “I had been trying to train every day but it is great getting back out on the field and seeing live arms and seeing things I haven't seen. We had five months of an off-season already and then you add five months to it, that is a long time without baseball. I have never even had a full off-season, much less going this much time without playing baseball. This has been definitely different.

“It would probably take four or five sessions like this where you are starting to figure things out. We got a lot of AB's today because there was only four or five hitters, and there were more pitchers than hitters. So that is good for us because you usually have two guys throwing and six guys wanting (at-bats), so then probably four or five times likes this and then you are starting to feel comfortable at the plate and figure things out.”

“It's definitely way different. The machine is as close as you can come outside of live pitching, and you have to do everything you can off the machine,” he said. “But when you have live arms - that is what I am out here. You gotta get out here and do it. There is no substitution for that.”

Hopefully the call to start the season happens sooner rather than later, and Davidson said he doesn’t know what he will feel when he finally returns to the diamond for a game.

“It will probably feel a little weird to be honest with you,” Davidson said. “Even after taking five months off and then going to spring training, it was like, 'What am I doing out here?' Even at Clemson you were out there until November or December and then you are back out there in January, so after taking all those months off it was like trying to learn the field again. But it came back quickly.”