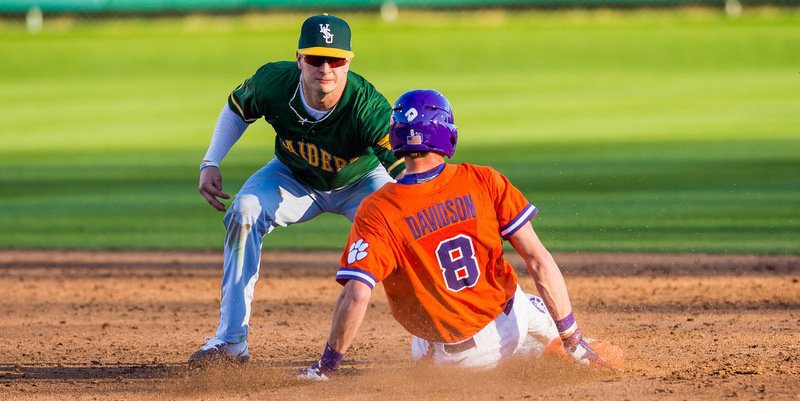 CLEMSON – The Clemson baseball team is struggling with season openers.

Wright St. scored three runs in the seventh and added an insurance run in the ninth in defeating No. 10 Clemson 6-4 at Doug Kingsmore Stadium Saturday evening. The loss marks the fourth straight season-opening loss for the Tigers, who have also lost five out of the last six.

Freshman shortstop Logan Davidson was 2-for-3 with two runs scored and two driven in, while second baseman Grayson Byrd went 3-for-4 and drove in a run. K.J. Bryant had two hits and scored a run, while Seth Beer walked three times and scored a run.

"This was a tough one. Obviously, if you look at the box score and we lose the game 6-4, you have to give Wright State a lot of credit," head coach Monte Lee said. "I think every time we made a mistake, they made us pay. They did an unbelievable job of hitting with runners in scoring position, coming up with big hits and I think ultimately that was the difference in the game. We just couldn’t come up with that big hit with runners on base. We had our opportunities and they did. If you look at the at-bats, we had more quality at-bats than they did.

"We won in the free department with nine walks tonight. The bottom line is we’ve got to be able to do the little things. We had a couple of bunt opportunities and we couldn’t get a safety squeeze down in the second inning that would’ve given us a run. We had a tough strike out with the bases loaded in the sixth, which is going to happen and we couldn’t get a bunt down later in the game. We just have to execute. We did a really good job of getting runners on base. We did a really good job of throwing strikes. We played a decent game defensively." 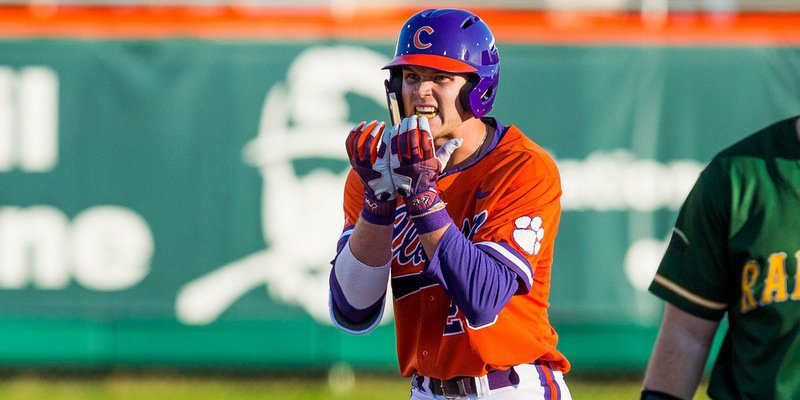 Barnes allowed triples in both the first and second innings but worked out of trouble each time. Clemson dented the scoreboard in the second following a leadoff single by Logan Davidson. Patrick Cromwell singled to advance Davidson to second and Grayson Byrd rifled a single through the right side to score Davidson for a 1-0 lead.

Beer doubled to lead off the bottom of the third and advanced to third on a single by Westin Jackson. Davidson hit a bloop single to center to score Beer, and the Tigers led 2-0 at the end of the third inning.

Barnes continued to dance in and out of trouble, but the Huskies finally broke through in the fifth. Consecutive singles by Matt Morrow and Zach Weatherford, who promptly deposited a two-run double into the left-center field gap to tie the game at 2-2. Barnes was replaced by Tyler Jackson a batter later, and Jackson kept the damage at two runs.

Barnes finished with 4 2/3 innings pitched, giving up two earned runs while walking one and striking out six. He gave up eight hits and threw 90 pitches.

K.J. Bryant helped the Tigers retake the lead in the bottom of the inning. Bryant laced a single to right to open the frame, stole second and advanced to third on Rohlman’s grounder. The Raiders walked Beer to put runners at the corners, and Jackson walked to load the bases.

That brought up the freshman Davidson, who lofted a sacrifice fly to center to plate Bryant for a 3-2 lead.

Clemson blew a golden scoring chance in the sixth, loading the bases with one out for Beer. Beer struck out swinging, however, and Jackson grounded out to end the threat. It was the third time the Tigers left the bases loaded in the first six innings.

The Raiders made the Tigers pay for that missed chance in the top of the seventh, using two singles and stolen base to make it 3-3. That ended the night for Jackson, who was replaced by Jacob Hennessy. Hennessy gave up a run-scoring double to Gabe Snyder on his fourth pitch, and Wright St. led for the first time all night at 4-3. An error and a passed ball on freshman catcher Kyle Wilkie made it 5-3.

The Tigers grabbed another run in the bottom of the seventh. Davidson walked to lead off the inning, and pinch-hitter Jordan Greene singled off the pitcher’s glove. Cromwell bounced into a double play that moved Davidson to third, and he scored on a wild pitch to make it 5-4.

Weatherford launched a towering solo homer to left in the ninth for the final runs.

"When we lost to Maine, I remember Chris Okey coming up to me and telling me, ‘This doesn’t define our team. This doesn’t define who we are.’ It’s that plain and simple," Beer said. "Have you ever heard of an undefeated baseball team because I haven’t? If you have, please tell me because I’d love to know who they are. The thing is you’re going to go out there and you’re going to win some and lose some, but it’s whoever gets back up after they fall, those are the true champions."

The Tigers and Raiders play game two of the series at 2 p.m. Saturday in Doug Kingsmore.

Clemson vs, Wright St. game one box
Get the latest Clemson gear right here!
Comment on this story