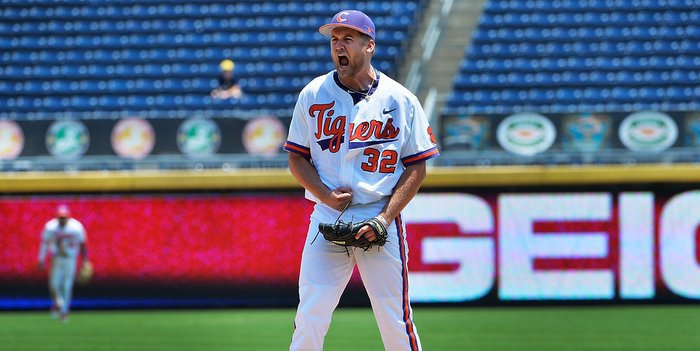 Schmidt shows his emotions after end of eighth inning

Clate Schmidt bounced off the mound after an eighth-inning strikeout and pounded his chest while letting out a primal scream that could be heard all over the ballpark.

Schmidt deserved to let his emotions show after handcuffing top-seeded Louisville for 8 2/3 innings Friday afternoon in Durham at the ACC Baseball Championship, leading the Tigers to a 5-3 victory and edging his team ever closer to a spot in Sunday’s championship game.

The innings were a career-high, and it earned him his eighth win of the season, acting as a bit of redemption for a pitcher that was sent to the bullpen a month ago. However, Schmidt pitched perhaps his best game of the season last week in helping Clemson sweep Notre Dame and topped that with Friday’s performance.

“Clate Schmidt, what can you say. It doesn't get more gutsy than that,” head coach Monte Lee said. “The guy is just an absolute warrior, and the one thing that you know when Clate Schmidt pitches in big-time atmospheres and big-time games, he steps up, he elevates to the level of competition, and when we need him the most, he got it done for us today. So I just can't tell you how proud I am of him. It will go down in my mind as one of the more gutsy performances I've seen out of a starting pitcher.

“They scored some runs early, and he held them at bay and found a way to get deep into the ballgame. Got into the ninth inning and against a really good offense. Just can't say enough about him and his toughness and competitiveness. That's why we won today was because of Clate Schmidt's toughness and our ability to find a way to put together some big at-bats against a really good starting pitcher.”

Schmidt said his recent resurgence gave him the confidence boost he needed.

“I think that today, I knew going into it, especially with the previous starts and outings, I was coming in there with a different confidence level,” Schmidt said. “Our defense and offense have really been clicking as of late, as they always have been. I was really fortunate to be able to go in there with a lot of confidence and just try to execute pitches and get us out and back into the dugout as quickly as possible.”

Schmidt started the ninth inning and got two quick outs, but two singles chased him after his career-high in innings. Pat Krall came in and induced a liner to short to end the game, but Schmidt’s effort helped out the Tigers’ rotation heading into the last two games of the tournament.

“There's no doubt about it. I mean, him being able to go deep today was big for us because we used (Alex) Eubanks out of the pen in Game 1 and we used Krall out of the pen in Game 1, as well,” Lee said. “So for Clate to be able to get deep into the ballgame, it was critical for us. And I think the biggest thing, you look at this start, they scored a single run in the second, third and fourth inning, and he stayed out there. He stayed out there and he kept pitching, he kept pitching, he kept competing and he got better as the game went on.”

Lee said Schmidt didn’t want to come out in the ninth, even though he had thrown 126 pitches.

“You know, he wanted to stay out there for the whole game, but the pitch count was getting up there. You know, I thought he was maybe running out of gas a little bit,” Lee said. “He would argue that he wasn't. But that's because he is a great competitor. That's just the competitor that he is. He doesn't like it when I take him out of the game.

“But I think it's just a testament, again to, what type of competitor Clate Schmidt is. You look at this season for him, he's been up-and-down at times, but when we needed him the most at the end of this season, he's been arguably our best guy. He's thrown extremely well. So I couldn't be prouder of him to be able to stick with the process, to deal with the ups and downs, and all the adversity that he's faced in life, I think has helped him.”

Schmidt said he was more comfortable in the rotation.

As he walked back out to the mound to start the ninth, Schmidt had a long conversation with himself about what he needed to do to make sure his team wound up on the winning end.

“I kind of had an idea of where I was pitch-count wise and I knew that I needed to be able to get these guys quickly,” he said. “And not saying that it was like margin for error or anything like that, but I wanted to be able to get these guys, get this win and shut them down, because they can come back at any time. They are an extremely well-rounded team and explosive offensively. I just kind of did the same routine that I've been doing every other inning, and just took a step off and took a little breath and kind of refocused in.”