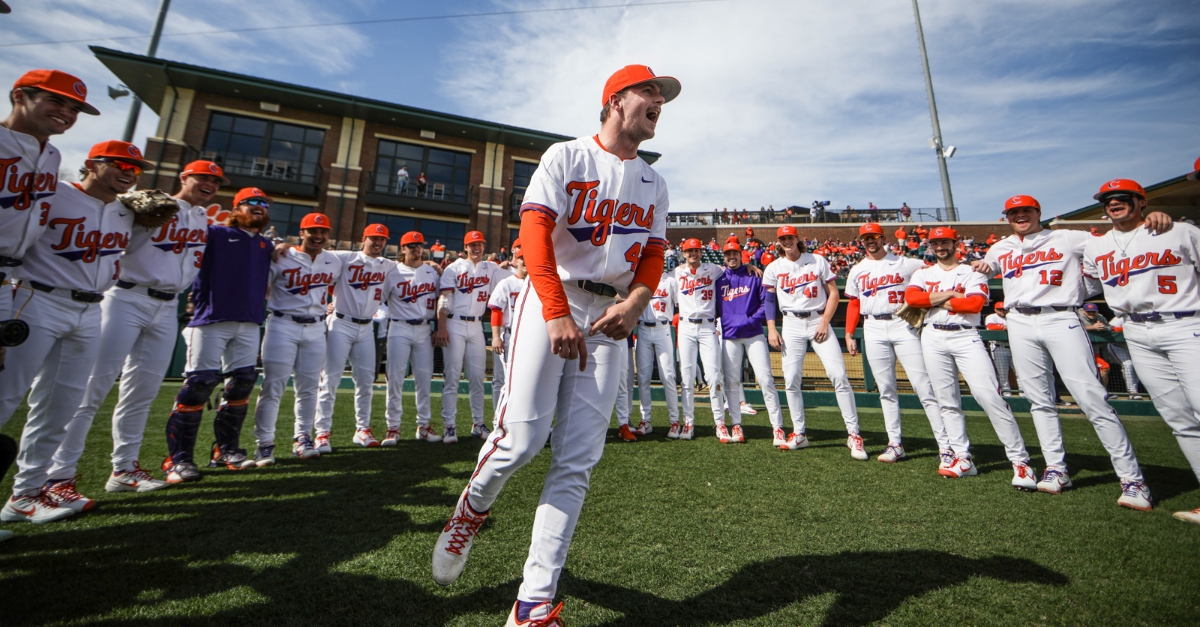 CLEMSON – Sorry Gamecock baseball players, no ice cream for you.

Tiger pitcher Carson Spiers grew up in the state of South Carolina and is a legacy athlete at Clemson. His cousin Will Spiers is a punter (and now a backup quarterback this spring) on the Clemson football team. His father, Michael, his uncle Bill and his grandfather Bud all played baseball for the Tigers. Spiers grew up in the rivalry and he understands what it means to the state of South Carolina.

He pitched the final two innings of Sunday’s series finale against the Gamecocks, recording his fourth save of the season as Clemson won the series 2-1. The series win marks the fifth time in the last six years the Tigers have won the series over the Gamecocks.

Spiers said his save was special.

“That's awesome. I grew up in this state and I know what it means to all of the fans and all of the people in this state,” Spiers told TigerNet. “You are either a Clemson fan or a South Carolina fan when you grow up in South Carolina. Luckily, I grew up as a Clemson fan and had the opportunity to play here. And what better way to end my career against South Carolina - game three of the series, games tied at 1-1, going into my last year and then I get the ball in the eighth inning with a three-run lead and close the deal. I am grateful for the opportunity and grateful for (pitching) coach (Andrew) See and Coach (Monte) Lee giving me that opportunity.”

The University of South Carolina hired Bob Caslen as the school’s new president back in July, and Caslen didn’t waste any time in letting the Gamecock fans know that he understands how much the rivalry means in the state. Caslen promised that any team that beats Clemson is invited to his house for an ice cream sundae social.

For the baseball team, and the big four men’s sports in general, the ice cream will have to wait. Over the last five seasons the men have crafted a remarkable 18-3 record over the Gamecocks. Clemson baseball is 4-1 (series wins), football is 5-0, men’s soccer is 6-0, and men’s basketball is 3-2.

Will Spiers is 4-0 against the Gamecocks (including his redshirt season), and was on hand Sunday to cheer on Carson. The cousins talk about their place – and success – in the rivalry.

“He was here today and he was cheering me on. We definitely talk about it. He has never lost to them, fortunately, and unfortunately, but they only play them once a year and we play them three times so there is a little bit of give and take there,” Spiers said. “But the football program has got it going on, and now with the baseball program I've won three out of four against South Carolina so I will take that any day.”

Spiers said he that he knows he will appreciate the dominance more as he gets older.

“It is special. It will be something special that I can look back in 20 years and tell my kids, hey look, this is what happened when I was here,” he said. “I was able to win three out of four. At the same time, this weekend against South Carolina is just another weekend. We treat them like any other team and luckily, we have won three out of the last four against them.”