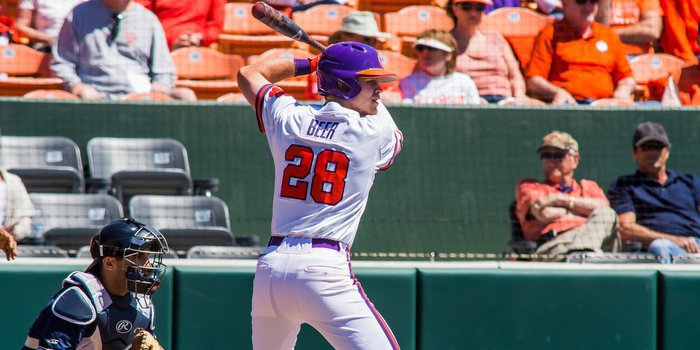 Seth Beer became the first player in ACC history to win Player of the Year and Freshman of the Year.

GREENSBORO, N.C. (theACC.com) – Clemson outfielder Seth Beer has been voted the Atlantic Coast Conference Player and Freshman of the Year by the league’s head baseball coaches, becoming the first player in ACC history to earn both honors in a single season.

Louisville junior Drew Harrington was voted the ACC Pitcher of the Year, while the Cardinals’ Dan McDonnell was selected as the ACC Coach of the Year for the second consecutive season.

Beer and Harrington head up the 2016 All-ACC Baseball Team, which was also announced on Monday.

A native of Suwanee, Georgia, Beer enters this week’s ACC Baseball Championship tied for the conference lead in home runs with 15 and ranks third in RBIs with 60 in 54 games. Beer is batting .378 to rank sixth in the conference and is second in slugging percentage (.694), third in on-base percentage (.528) and is tied for second in total bases (2.31 per game).

In addition to several conference and national weekly honors, Beer was named the National Hitter of the Month of March by the National Collegiate Baseball Writers Association (NCBWA) after batting .431 with nine home runs and 21 RBIs. His regular-season accomplishments also included a 26-game hitting streak – tied for fourth-longest in school history – as he keyed the Tigers to a 38-18 regular season. 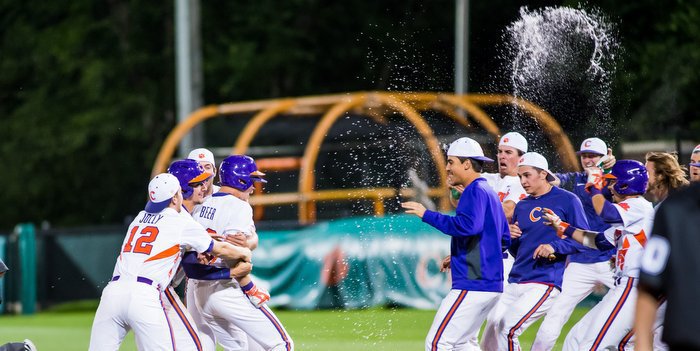 Seth Beer became the first player in ACC history to win Player of the Year and Freshman of the Year."

Harrington helped Louisville to a second-straight ACC Atlantic Division crown with an 11-1 record in 14 starts. The Elizabethtown, Kentucky, native ranks third in the conference with a 1.66 ERA. Harrington has struck out 71 batters while walking just 22 in 92 innings and has allowed only three home runs. In his 10 ACC starts, Harrington was 8-0 with a 1.33 ERA and 47 strikeouts in 67.2 innings pitched.

McDonnell was again voted ACC Coach of the Year by his peers after guiding the Cardinals to a 46-10 overall regular-season mark, a 22-8 record in ACC play and a top-five national ranking. Louisville brings a nine-game winning streak into the ACC Championship.

Along with the impressive numbers put up by Beer and Harrington, the All-ACC first team includes the league’s leading hitter in Pitt’s LeBlanc (.405), and the RBI co-leaders in Wake Forest’s Craig and Clemson’s Okey (62). Craig’s 15 home runs are tied with Beer for the ACC lead. Louisville’s Ray leads the conference in stolen bases with 37, while Florida State’s Sansone shares the ACC lead in doubles with 22. Miami’s Collins sets the pace in on-base percentage (.552) and Craig in slugging percentage (.772).

Harrington, McKay and Jones are among the league’s co-leaders in wins with 11. Jones (92.1) and Harrington (92.0) have pitched the most innings this season.

Louisville led all schools by filling five All-ACC first-team slots. Three were selected from Georgia Tech, and two each from Clemson and Wake Forest.

Duke and Georgia Tech led with two selections each to the 12-member All-ACC Freshman team..

3B - Will Craig, Wake Forest