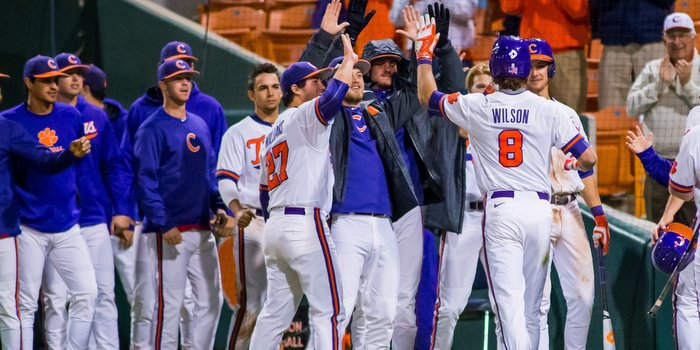 CLEMSON – The Blue Hose tried to make it close at in the end, but No. 12 Clemson prevailed for its eighth consecutive win.

Clemson improves to 17-3 with the win and has won six in a row while Presbyterian falls to 11-9.

Higginbotham pitched 5 2/3 innings in picking up the win, his third of the season. The freshman lefty gave up one run on six hits and two walks and struck out four. Brooks Crawford, Patrick Andrews, Paul Campbell and Alex Schnell combined to pitch the final 3.1 innings.

For Presbyterian, David Sauer picked up the loss after giving up four runs on five hits and three walks in five innings of work.

The Blue Hose got on the board against Higginbotham in the bottom of the first. Brett Auckland singled and scored on a Weston Jackson double for the 1-0 lead. The Tigers answered in the bottom of the frame, however, and it started with a Chase Pinder leadoff walk. He advanced to second on a grounder by Reed Rohlman and scored when Seth Beer laced an RBI single into right. The single by Beer extended his hitting streak to 18 games.

The score remained tied at 1-1 until the bottom of the fifth. Rohlman was hit by a pitch with one out and advanced to second on a wild pitch and to third on a fly out by Chris Okey. The Hose intentionally walked Seth Beer to bring up Wilson, and he made the Hose pay by launching a 2-0 pitch over the wall in left for a three-run homer and a 4-1 Clemson lead. 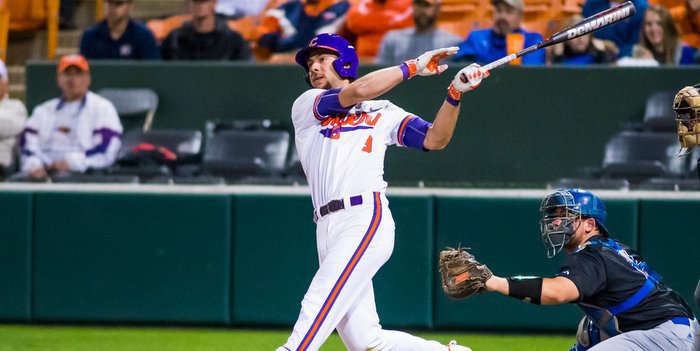 Eli White walked and stole second to lead off the bottom of the sixth, and that was followed by a Chris Williams walk. Adam Renwick sacrificed both runners over, but Pinder’s fielder’s choice forced White at home. Rohlman followed that with a two-run double for the 6-1 Clemson lead.

Williams walked to lead off the eighth, and he advanced to second on a single by Renwick. Pinder then came through with a two-run single up the middle for the 8-1 Clemson advantage.

The Tigers ran into trouble in the ninth, using three pitchers to get out of a three-run mess that made the final score 8-4.

The Tigers travel to Coral Gables this weekend to take on No. 4 Miami in a three-game series. Friday and Saturday’s games begin at 7 p.m. and the series finale on Sunday at 1 p.m.

Clemson vs. PC boxscore
Get the latest Clemson gear right here!
Comment on this story