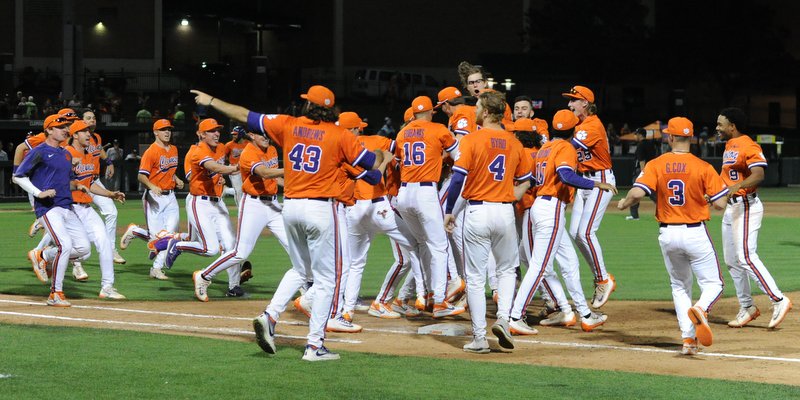 CLEMSON – Candy for everybody.

Chris Williams walked with the bases loaded and two outs in the bottom of the ninth as No. 3 Clemson scored three runs in overcoming a 7-5 deficit, defeating No. 17 Wake Forest 8-7 Friday night at Doug Kingsmore Stadium.

Jordan Greene singled with one out, Weston Jackson was hit by a pitch and Chase Pinder walked to load the bases. Reed Rohlman dropped a single into right that made it 7-6, and Logan Davidson’s sacrifice fly to center tied the score at 7-7.

Seth Beer walked to load the bases for Williams, who watched a 3-2 pitch sail high for the game-winner.

First-place Louisville – ahead of Clemson by a game in the standings heading into the day – lost 5-3 to Duke earlier in the day and the teams are tied atop the Atlantic Division standings.

Due to the threat of inclement weather Sunday, the teams will play a doubleheader that will begin at 2 p.m. Saturday. 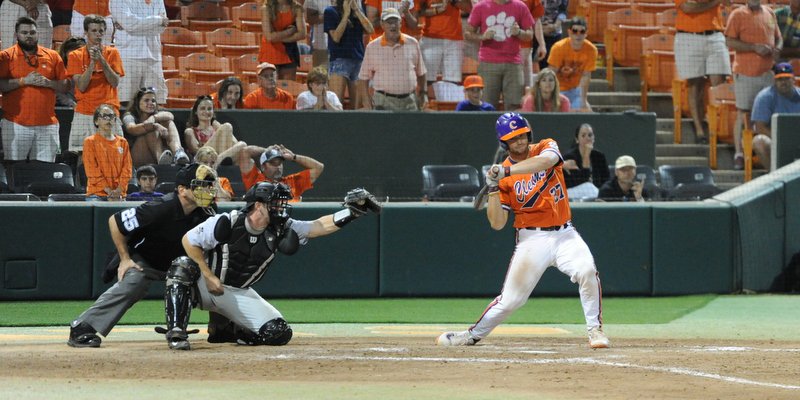 "That was an incredible game. That was the most exciting game that I’ve been a part of," Lee said. I was thinking as that game was going on and as that was happening in the ninth inning, I don’t recall being a part of a game more exciting than that one. It doesn’t get any better than that. Just the change in momentum. In the first inning, we score four runs and put together some great at-bats early in the game and then Sheets, being one of the best power hitters in the country, hits the two-run homer for their big inning in the third. They score a couple of runs there in the middle innings and they capitalize in the eighth and score a couple and were down by two and then we just put together some great at-bats. Jordan Greene, 3-2 count and a base hit up the middle.

"Weston Jackson with the hit by pitch. Pinder, an incredible at-bat for a walk and then Rohlman and Davidson with the single RBI and the lineout. The back-to-back walks. Chris Williams, what a great at-bat, just staying in the strike zone and forcing their guy to throw it in the zone. We won the game. Our guys just believe. They believe that we will find a way and they really compete. There were a lot of things in the game that we failed to do. From the Florida State weekend and the Georgia midweek game, it just seems like every time we make a mistake - a walk, error or miscue - teams are making us pay. We’re really being challenged to play our best baseball right now. Our guys just competed as hard as the possibly could have and found a way to get it done."

The Clemson bats were hot early.

Pinder and Rohlman led off with back-to-back singles and a Logan Davidson walk loaded the bases for Beer. Beer laced a double down the right field line plating two runs. Sac flies by Williams and Andrew Cox scored two more runs, giving Clemson a 4-0 lead after the first inning.

Wake Forest came roaring back in the third. The ninth hitter in the order worked la ead-off walk and came around to score on a two-out single by Stuart Fairchild, and Gavin Sheets rocketed a 3-2 pitch over the right centerfield wall to cut Clemson’s lead to 4-3.

Clemson answered in the fourth as Jordan Greene led off the inning with a single, advanced to third on a single by Pinder and a passed ball and scored on a wild pitch giving Clemson a 5-3 lead.

The Demon Deacons got the run back in the fifth when Jonathan Pryor singled to begin the inning advanced to second after a walk and scored on a single by Ben Breazeale to once again cut the deficit to just one run at 5-4.

Starting pitcher Charlie Barnes’ night was done after giving up a lead-off double to Johnny Aiellow in the sixth, who came around to score and tie the game at 5-5.

Patrick Andrews replaced Barnes in the sixth and pitched two scoreless innings before running into trouble in the eighth. The Deacons strung together two hits after one out – the second one a double into the right field corner – and Andrews was replaced by Ryley Gilliam.

Gilliam was greeted by Bruce Steel, whose single into left scored the go-ahead run that made it 6-5. A grounder to third forced the runner at the plate for the second out, but a walk loaded the bases, and another walked forced in a run for a 7-5 lead.

Clemson vs. Wake Forest game one box
Get the latest Clemson gear right here!
Comment on this story