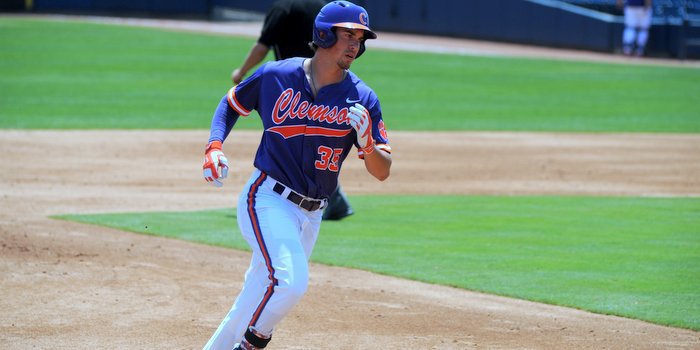 Triller celebrates with his teammates after his homer

Clemson’s senior designated hitter’s home run ball didn’t quite make it to the bull at 329 feet, but it did give Clemson a 3-1 lead over Virginia in a game the Tigers would go on to win 5-4. His fifth-inning homer was one of the key blows in a game the Tigers had to have, a special moment for a player who entered the game with just 25 at-bats on the season.

Why was Triller taking aim at the iconic bull? He’s seen it a few times in the movie Bull Durham, one of the best baseball movies of all time.

“I've only seen it a couple of times, probably one of my favorite baseball movies,” Triller said of his long ball. “I don't know a ton about the history behind the movie Bull Durham and stuff like that, but I'm sure Coach does and some of the other guys. I'm not too big into movies or anything like that. But I was aiming for the bull. But didn't quite get it there.”

Head coach Monte Lee quickly interjected and gave the reason as to why Triller’s home run didn’t hit it’s mark, but you’ll have to see the movie to understand.

“He was breathing out of his right eyelid on that swing,” Lee said, referencing one of the movie’s storylines where pitcher Ebby Calvin “Nuke” Laloosh is taught to relax by breathing through his eyelids. 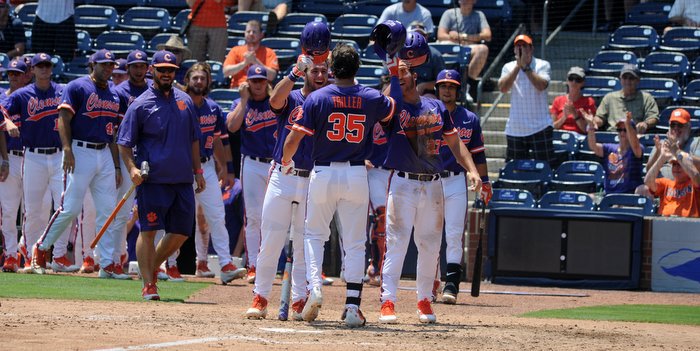 Triller celebrates with his teammates after his homer "

The Vermont native has only made three starts this season, but has two homers in those starts, and Lee said that Triller gives him exactly what he’s looking for in a designated hitter.

“Well, I think that Mike is a guy that, you look over the course of this year, I wish I would have probably given him more at-bats over the course of the year. But I told myself going into the latter part of this year, I'm going to give Mike Triller those at-bats,” Lee said of the decision to start Triller. “He gives you quality at-bats, gave us two quality at-bats today. He swung the ball really, really good at Notre Dame, hits some balls hard and he hits the ball hard to the left side of the field. We felt like if we're going to put a guy in the lineup that's got some power, he's one of the guys that could hit a ball out over the monster. So we felt like it was a good match up; this ballpark was a good match up for his swing.

“He's been swinging the bat well. Felt like he was the right guy. He's a senior; he deserves an opportunity, and he's going to continue to get those opportunities. What a great at-bat. You think about the two at-bats that he had today where he hits a two-run homer with two strikes on him against a potential first-round draft pick and draws a walk there at the end off the game to set up the sacrifice bunt, so that we can win the game on Pinder's sac fly. Just gave us two great at-bats. It's always nice to have a guy that gives you a presence at the bottom of the board that can give you quality at-bats, and couldn't be happier for him.”

Triller was even happier.

“I mean, I haven't gotten out there very much. It's been a little bit of a struggle,” Triller said. “Just been trying to find my swing here and there. But been feeling good lately, so Coach got me in the lineup, and I was able to capitalize.”