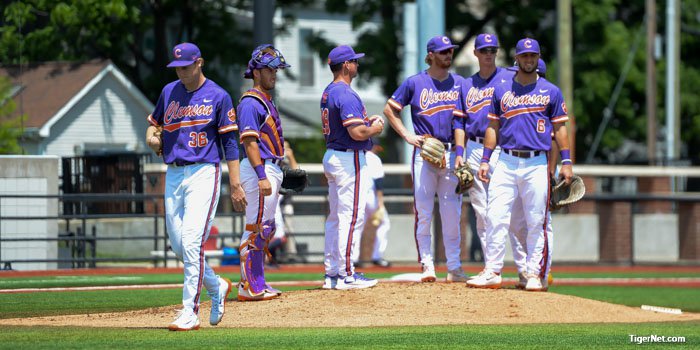 Andrew Cox takes a throw from Krall early in the game

LOUISVILLE, KY – Pat Krall turned and watched the ball from a three-run homer land on the grassy berm behind the fence in left, and he knew his day was done, as was Clemson’s quest for a 40th win.

Krall gave up hits to the first six hitters in Virginia’s lineup – all of them scored without an out – and the Cavaliers rode and eight-run first inning to a 10-2 victory over the Tigers at the ACC Baseball Championship, played at Jim Patterson Stadium Friday afternoon.

Clemson, which has lost 14 of its last 24 games, falls to 39-19 overall and must wait for the NCAA Selection Show Monday to see if they will host one of the 16 regionals. Regionals start next Friday.

Clemson went 0-2 in the ACC Tournament, losing to Virginia Friday and Duke Tuesday. The Cavaliers were the fourth seed and the Tigers the fifth seed, but ninth-seeded Duke will advance out of the pod after recording wins over both higher seeds. Virginia improves to 42-14 with the win.

"Give Virginia a lot of credit. They played a great baseball game today," head coach Monte Lee said. "They jumped on our starting pitcher, Pat Krall, in the first inning. Just seems like every ball we threw over the plate, they hit on the barrel. They got a lot of momentum going their way in the first inning. We couldn't stop the bleeding.

"Tried to get Eubanks in the ballgame as quickly as we could but by that point, you know, they were centering every baseball that came across the plate. I thought after that, we actually threw the ball pretty well. If you look at the job that Alex did after the first inning when he came in, Schnell did a nice job, Tyler Jackson, Riley, our guys did a nice job of pitching.

The Tigers got off to a good start. Chase Pinder led off the game with a walk, advanced to third on a hard-hit single to right by Reed Rohlman and came around to score on a Seth Beer ground ball to give Clemson an early 1-0 lead.

Clemson’s lead didn’t last long however, Krall faced six batters and gave up six runs on six hits. Virginia led off the game with four consecutive singles, back-to-back doubles and a three-run home run without recording an out. It was the most runs given up by Krall in his career. His season ERA went from 2.99 to 3.63 in the span of those six batters. He falls to 9-3 with the loss.

Alex Eubanks came on in relief and got a quick fly ball, but gave up back-to-back doubles and a single as Virginia sent 12 batters to the plate and scored eight runs on nine hits for an 8-1 advantage after the first inning.

In the fifth, a strikeout and a throwing error led to another Virginia run, as the Hoos led Clemson 9-1. Virginia added another run in the eighth, and Weston Jackson hit his seventh homer of the season with one out in the ninth to end Clemson's scoring.

Clemson is now left to ponder whether they will host next weekend.

The Tigers finished the season with nine losses in their last 10 ACC games, and then dropped both ACC Tournament games in less than stellar fashion. Clemson still has two things working its favor - a 17-13 ACC record and a No. 11 RPI. It also owns some nice series wins against Wake Forest, Virginia and South Carolina. However, the complete collapse in the final month might weigh heavy on the minds of committee members, who like to reward teams who are playing well.

Lee said he thinks his team has plenty of fight left.

"I don't think it's necessarily that the fight has gone out of the team. I think the biggest thing is once we get our backs against the wall, our guys are pressing a little bit," Lee said. "We talked a lot about before the game, just trying to take the result and the outcome out of it and just play good baseball. Just play free and easy and compete, and let the results take care of themselves. That was a big message for us today.

Clemson vs UVA Boxscore
Get your Clemson Soccer National Champs Gear Here!!
Comment on this story