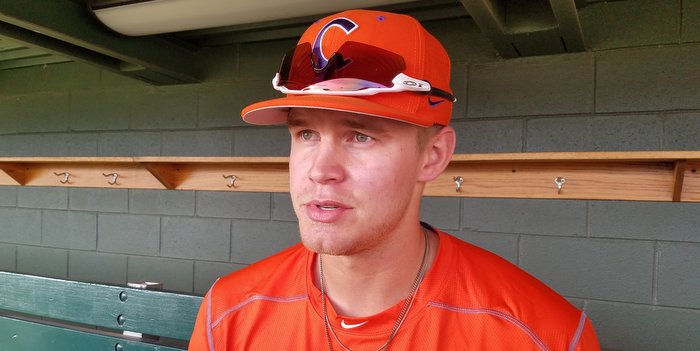 Beer talks to the media Tuesday

CLEMSON – As a 195-pound true freshman who was only on campus for weeks before opening day last season, Seth Beer was named the Dick Howser National Player of the Year.

What can he do with 20 pounds of extra muscle and a year’s worth of experience?

We’ll all find out starting Friday afternoon as Clemson opens the 2017 baseball campaign against Wright State, but head coach Monte Lee isn’t putting any expectations on his star player.

“I wish I had a crystal ball. Heck, I don't know (if he can be better),” Lee told the media Tuesday afternoon. “He was the national player of the year. To put those types of expectations and results on him is awfully tough. I don't really talk too much about results. I never want Seth to define himself based on what he's done. I think that's the problem with most athletes. They will define themselves based on what they've done as opposed to who they are. Why did Seth Beer have the year he had? It's because of who he is. He was focused and mature and had a great approach at the plate. He didn't try to do too much.

“When he came here last year, he was surrounded by some veterans, and he just played baseball. His expectation was just, 'Hey, I just want to play.' Now, I don't want Seth to put too much on his shoulders in year two because of what he did. I just want Seth to be who he is. If Seth Beer is Seth Beer, he's going to be fine. If he starts worrying too much about what he's already done, I think that's where any player could put themselves in a tough spot because they're managing results and expectations. We want to manage our focus and how we compete.”

Beer said his main goal during the off-season was to give full effort in the weight room and the strength and conditioning program, and his commitment shows with just one glance at the Georgia native.

Beer talks to the media Tuesday "

“I've added about 15 to 20 pounds. I was at 195 when I got to Clemson, and I'm about 215 now. I've worked extremely hard in the weight room, as our team has worked extremely hard to get to this point,” Beer said. “I think there was a bitter taste left from those last couple of pitches and the last game we played from how the excitement was from the whole season and I feel like it's stuck with a lot of guys who are returners and we've also passed that on to a lot of the freshmen.”

Not only does Beer look a little different, but he’ll also be playing a different position – making the move from right field to first base – a challenge he said he met just like any other.

“It's just one step at a time. There are days that it's really tough and there are days when you feel like you've got it all figured out, but in the game of baseball you never figure anything out,” Beer said. “You just have certain days where it gives you a chance that you do. I'm just taking it one step at a time and trying not to get too discouraged if things don't pan out the way I want them to on certain plays or certain situations. I'm learning day by day, and hopefully, I'll keep learning throughout the season. I think I've worked extremely hard to get to this point, so I'm just excited to go out there with my team and compete.”

His early success led many pitchers to change their approach late last year – either pitching him inside or way outside – but Beer said it’s all baseball and he’ll make adjustments of his own.

“Baseball is just a game of adjustments. The guys that can make the adjustments are the guys that you see play for a long, long, long time,” Beer said. “It's one of those things that's always going to be a bump in the road with this sport. Obviously, adjusting to those at-bats and certain situations is definitely something that I have to accept and not try to muscle up or do too much.

“My dad says every day just to take what they give you. Sometimes, it doesn't seem like the best situation or something you want to do. Everybody wants to be that guy who comes up and gets a big hit but as a team guy and wanting to do whatever it takes for the team win, if that pressure falls on another guy I know I have eight other guys out there that want to get in that position as well, so if I'm on base for that big hit I'll be just as excited as if I did it myself.”

“I think I go in with the same attitude and same approach I had last season and that's the only thing I'm really going to take away from that season,” he said. “I just have to stay confident and not worry about what the stats say - how many home runs and how many doubles. You've just got to go out and play just like when you were a kid. You don't think about that kind of stuff. The stats nowadays are crazy, and they have something for everything. I just have to play the game and do whatever I can do to help my team win.”