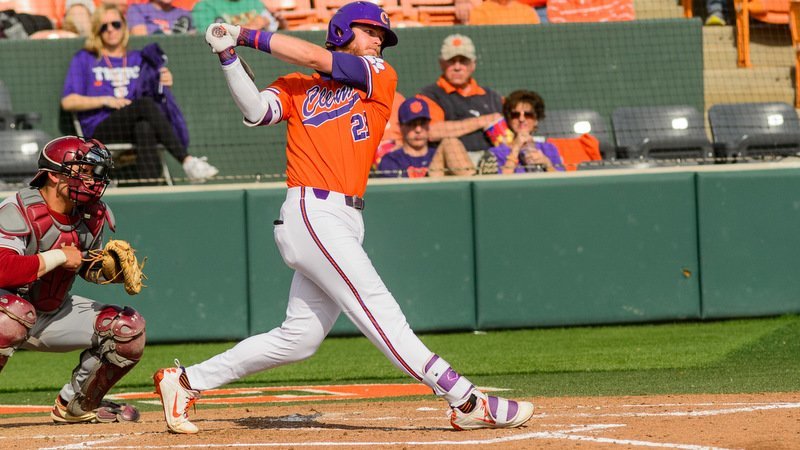 CLEMSON – Seth Beer homered and drove in four runs as No. 8 Clemson defeated Boston College 10-2 in the opener of a three-game series at Doug Kingsmore Thursday afternoon.

Robert Jolly drove in three with a double, while Beer and Patrick Cromwell each had two hits in the Tigers’ nine-hit attack. The Tigers also walked six times. Clemson improves to 20-6 overall and 6-4 in the ACC while Boston College falls to 9-14 overall and 4-6 in the ACC.

The Tigers jumped on Boston College starter Jacob Stevens early. Beer drew a one-out walk and moved to second on a soft single to center by Cromwell. Chris Williams walked to load the bases, and Jolly laced a 2-1 pitch down the right field line and into the corner. All three runners scored easily and Clemson had the early 3-0 lead.

The Eagles pushed a run across in the top of the second. Chris Galland hit a two-out double and attempted to steal third. The throw to third sailed into left field and Galland scored easily to make it 3-1.

The Tigers added two more in the second. Jordan Greene walked with one out and moved to second on Logan Davidson’s single to center. Beer walked to load the bases, and Cromwell struck out for the second out. Chris Williams battled Stevens to a 3-2 count and then smashed a run-scoring single to left, scoring Greene and Davidson for a 5-1 lead.

Byrd reached first on a throwing error leading off the bottom of the sixth and was replaced by pinch-runner Adam Renwick. Renwick advanced to second on Wilkie’s sacrifice bunt and to third on a balk, and Jordan Greene walked to put runners at first and third. Davidson grounded out to third and Renwick scored without a play to make it 6-1.

Beer singled through the right side, scoring Greene, and the Tigers led 7-1 at the end of six innings.

Jacob Hennessy’s day was done after six strong innings. He allowed the one unearned run, walked two and struck out four on 83 pitches. He earned the win and improves to 3-1 on the season.

Beer added the coup-de-grace in the eighth. Wilkie walked with one out and advanced to second on a single by Greene. Davidson popped up for the second out, but the Eagles elected to pitch to Beer. Beer hit the first pitch he saw deep into the seats in right-center for a 10-1 lead. The homer was his eighth of the season.

The Eagles added a run in the ninth to account for the final score.

Boston College at Clemson game one box score
Get the latest Clemson gear right here!
Comment on this story