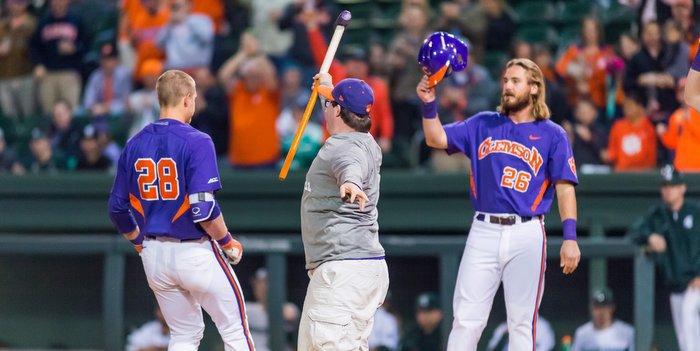 A Beer, a blast and good pitching are the perfect recipe for Clemson baseball.

Jackson picked up the win, pitching 6 1/3 innings, giving up two runs (one earned), striking out nine and walking none, improving to 2-1. Clemson improves to 9-3, while Michigan St. falls to 9-2.

Weston Jackson and Chris Williams had two hits apiece for the Tigers, while Beer drove in four and Williams drove in two.

A pair of doubles led to a Michigan St. run in the third, but Clemson did major damage in the fifth.

Jordan Greene, Patrick Cromwell and Logan Davidson all drew walks to start the inning, and Reed Rohlman was hit by a pitch, scoring Greene for a 4-0 lead. That brought up Beer, who worked the count to 3-2 before launching a shot over the wall in right for a grand slam, the third grand slam of his Clemson career and his fifth home run this season.

The home run was the 23rd of Beer’s career and he accomplished the feat in just 74 games. 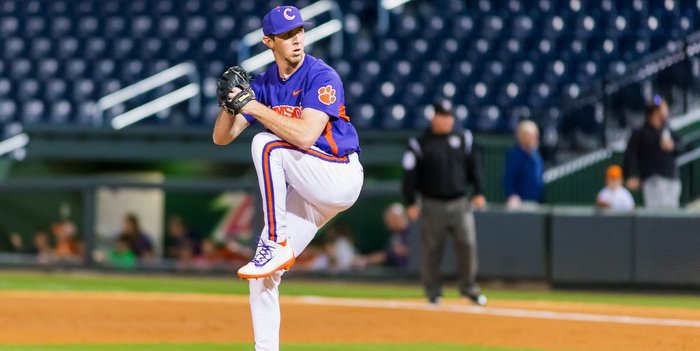 The Spartans scored on a double, a single and a passed ball in the seventh that made it 8-2, but the Tigers got the run back in the eighth.

Robert Jolly reached on a fielding error, and he was replaced by pinch-runner K.J. Bryant. Bryant advanced to second on a Williams single, and then moved to third when Andrew Cox bounced into a double play. Greene walked, and the Tigers executed a double steal that allowed Bryant to score to make it 9-2.

Clemson has now won 11 games in a row away from home since losing at Georgia Southern on May 14, 2016. The streak includes five road wins and six neutral-site wins. The Tigers won their last eight games away from home in 2016, including a 4-0 record in the ACC Tournament to win the league championship.

Clemson returns to action this weekend with the start of ACC play. Notre Dame, which has struggled out of the gate to a 3-8 record, visits for a three-game series that starts Friday.

Clemson vs. Michigan St. boxscore
Get the latest Clemson gear right here!
Comment on this story