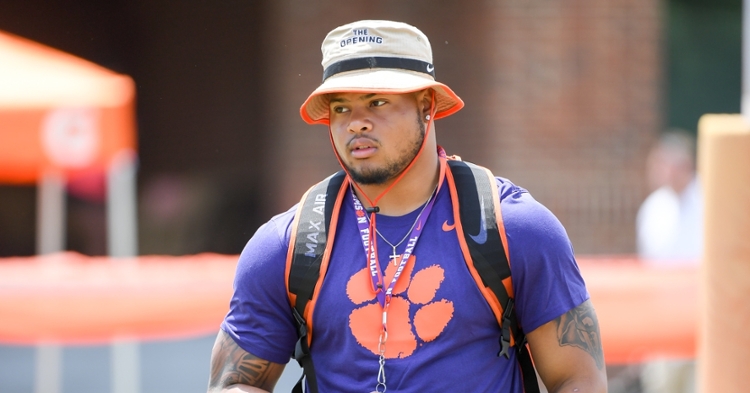 Xavier Thomas feels like he's halfway back to his potential.

Xavier Thomas showed a glimpse of his speed and quickness in last Saturday’s win over Boston College, bursting around the tackle in a flash and flushing the quarterback from the pocket. It was the kind of speed and quickness that Clemson’s fans, coaches, and Thomas himself had been waiting to see.

The 2019 season was Thomas’ first as a full-time starter, but with Brent Venables building his defense around the talents of Isaiah Simmons and a 3-3-5 scheme, his numbers weren’t where many expected them to be. He still fashioned a season that saw him finish as a third-team All-ACC selection and credited with 31 tackles (8.0 for loss), 2.0 sacks, two pass breakups, and a fumble recovery in 434 snaps in 12 games (eight starts, after missing time with a concussion).

This was supposed to be the breakout season, but a COVID diagnosis in late March got in the way.

“I was at a really good point after spring ball, and then dealing with COVID and stuff, it just set me back a lot,” Thomas said. “My symptoms were really bad. A really bad fever and my body was really bad. I felt really weak and stuff like that. With the breathing and stuff, it was pretty tough to get over.”

Thomas admitted that he had tightness in his chest when walking up and down stairs, but he was hopeful he was on the mend when strep throat reared its ugly head during the summer.

“Coming back in the summer I was really winded. My breathing wasn’t really good coming back, returning from COVID. It was really affecting me. Then I started to make a little bit of progress and I got strep, which put me back even more,” Thomas said. “Before fall camp I realized it would get real tight in my chest and everything would tighten down. I would really be struggling to breathe. So I really just had to talk to my coaches and things like that and tell them what I was going through. They had a protocol for me.”

There were dark times, but his family and friends were always there to provide support.

"It was definitely rough at first, but I had a lot of support from family and friends and coaches and teammates,” Thomas said. “Just following God's plan. This is just what my journey will be. This was supposed to be my biggest and best year. Definitely not what I planned, but just staying the course and controlling what I can control. This was out of my control this year."

Thomas was cleared to return to practice in September and made his season debut on Oct. 10th against Miami. He has appeared in each of the last four games and has tallied 61 snaps.

Thomas will miss the first half of Saturday’s game at Notre Dame after a targeting penalty was called against him late in the game against Boston College.

"I was just trying to make a play. I saw him getting ready to throw it so I jumped up and tried to hit it. The instinct was just to duck my head down,” Thomas said. “It wasn't like I was trying to target him. It was instincts, just playing football. It will be pretty tough man. I was really regretting putting my head down and stuff like that."