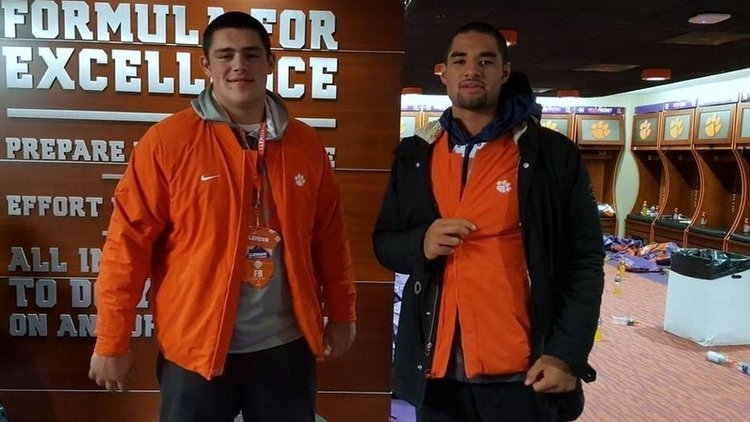 Early in July last year I was taking videos of several offensive line and defensive line prospects at The Opening Finals at The Star in Frisco, Texas. Before I made the trip, I did my best to memorize the best and brightest of the 2019 recruiting cycle with an eye on the ones that were interested in Clemson.

During the first session where the players could work against each other in pads and helmets, one player was noticeable, but I had no intel on him. Standing on the balcony overlooking the playing surface, I turned to one of the national recruiting writers and said, “Who is that guy?”

A voice beside me spoke up.

We talked a little further, and then I made a video call to Nikki (Hood) and said, “Look at this guy.”

We both agreed he was a man among boys, even then. Further conversation with his mother led me to believe that Clemson was there, but not really one of his favorites. I left that afternoon and called a friend of mine and said, “Someone in 2020 is gonna get one of the best defensive line prospects I’ve ever seen, and that includes Xavier Thomas.”

Little did I know then that he would commit to Clemson nine months and change later. The rich get richer.

What we saw that day in Frisco from Bresee is true today. At 6-foot-5 and 290 pounds, Bresee is a physical freak who can play inside or outside on the defensive line. Most defensive tackles are space fillers – they can plug up a hole and occupy blockers, but their size prohibits them from being a force in the middle.

Clemson has been blessed with guys like Dexter Lawrence and Christian Wilkins and Grady Jarrett over the years – more than space fillers – and Bresee takes that kind of athleticism a step further. If he decides to move inside at some point he Bresee will be as disruptive there as he is on the outside.

He has an incredible first step, uses his hands well, and has a nice repertoire of moves. Many high school players rely on their sheer size and athleticism and fail to learn proper technique until they get to college. Bresee bull-rushed a couple of the older players last year in Frisco and then used a variety of moves to keep them guessing. It was easy to tell then that he’s a quick learner and well-coached.

What does it mean for Clemson? The Tigers need to build depth along the defensive line, and Bresee will be a big part of that (if not someone that pushes for big playing time from day one).

The 2020 recruiting class is going to be a monster, and many of the final pieces have started to fall with the recent additions of RJ Mickens, Fred Davis, and Bresee. Expect a few more in the next few months with August providing a spark for the season.

With Bresee, Clemson moved to the top of the 247Sports Composite’s 2020 recruiting class rankings, jumping past Alabama in the rankings. If the Tigers were to hold that position, it would be the first time in program history they had earned a No. 1 class ranking. Bresee joins 11 other commits in Swinney's 2020 haul so far, including the class's second-best defensive tackle Demonte Capehart, No. 33 overall prospect cornerback Fred Davis, and top-ranked safety RJ Mickens.

Bresee plans to enroll early, but will not be able to send in a national letter of intent until college football’s three-day early signing period begins on Dec. 18.

The rich get richer, and this run is nowhere near finished. As Swinney says, the best is yet to come.