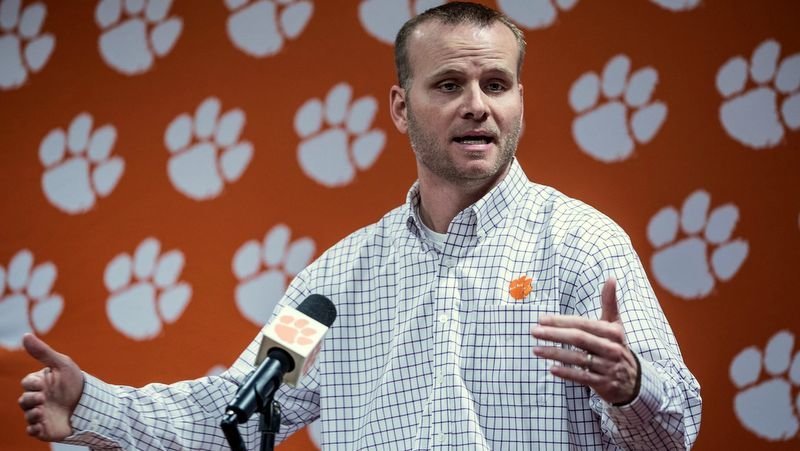 Streeter has been preparing for this moment for years.

Clemson head coach Dabo Swinney always has a plan. He just had to break the glass and put the plan into action.

The news broke Wednesday afternoon that Clemson offensive coordinator Tony Elliott had tested positive for COVID-19 and would not make the trip to New Orleans with the team and would miss the Sugar Bowl against Ohio State.

That prompted a lot of questions from everyone, and I hope I can answer a few of them here.

However, we will start with Swinney’s plan. He told us back in September that he had plans in place in case one of his coordinators had to miss a game.

“Yeah, we'll just have to wait and see if that happens," Swinney said. "Hopefully, that doesn't happen. But you best believe we have a plan, that's for sure."

"It's top-secret and in a glass case that says 'only if needed.' So we've got it locked up," Swinney said.

Well, the glass is broken and a plan is in place.

Let’s start with the first question that many had – can Tony Elliott coach from home, perhaps via phone or Skype? The answer is no, according to College Football Officiating, LLC.

*Rule 1-4-11-b is very specific and allows only voice communications between the press box and the team area, therefore in (a) the coach could not call into the press box or the sideline for anything related to coaching purposes. Rule 1-4-11-a would prohibit the use of technology including computers to be used for coaching purposes and this would include all virtual types of communication back to a team during the game, consequently in (b) any virtual session with the team would not be allowed. This prohibition would begin at 90 minutes before the scheduled kickoff when the officiating crew assumes jurisdiction of the game and would include the time between periods until the end of the game when the Referee declares the score final.

As Swinney noted on the team’s arrival in New Orleans, Elliott can be in constant contact with the team right up until the time the team leaves the hotel for the Super Dome, and then that contact ceases and can’t resume until after the game.

So who calls the plays? That will be a combination of both Swinney and quarterbacks coach/passing game coordinator Brandon Streeter. Streeter, who is usually on the field, will move to the booth for this game. Clemson great and current unpaid graduate assistant coach CJ Spiller will be on the field as the running backs coach.

That means that offensive analyst JP Losman – who was drafted by the Bills in 2004 with the 22nd overall pick and spent five seasons in Buffalo – will likely be on the field to help with the quarterbacks. Losman has been around since 2017, so he knows Lawrence, knows the offense, and is a familiar face to all of the offensive players.

Streeter is no stranger to Clemson or calling plays. Streeter is in his 13th full season at Clemson as a player and a coach, and returned to the program in 2014 when former offensive coordinator Chad Morris left to become the head coach at SMU.

Some bullet points from his career:

• Richmond was seventh in the nation in passing yards (328) in 2013. Virtually every Richmond individual game, season and career school passing record was established during the 2013 season. The 2012 Richmond offense was 20th in passing offense and 21st in scoring offense. The Spider offense saw five players earn All-CAA recognition.

• Streeter served as quarterbacks coach at Liberty for six years, the last three as offensive coordinator. In 2011, Liberty led the Big South Conference in passing yards and pass efficiency.

• In 2010, Liberty averaged 36.5 points per game, a better mark than in 2009, when the Flames led the nation in scoring offense (36.4). That Liberty team won the Big South Conference title for a fourth straight year.

The feeling around Clemson is that if/when Elliott leaves for a head coaching gig, Streeter would be the next in line to be the offensive coordinator. He’s been preparing for this moment at Clemson since he walked back on campus before the Russell Athletic Bowl in 2014.

It’s not great that Elliott is out just a few days before the game, but the glass is broken and the plan is in place. The Tigers will be just fine.