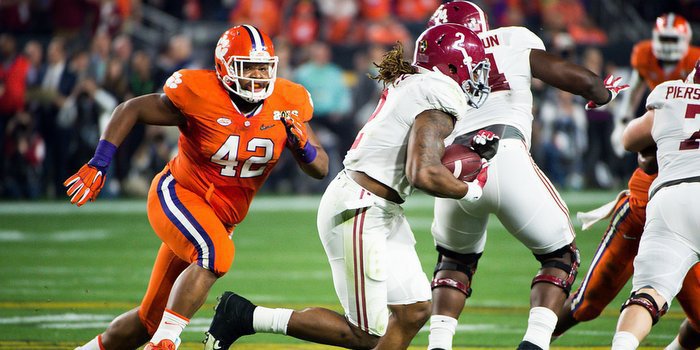 The first question that popped into my head: How does that affect Clemson and how they prepare for Alabama with Kiffin moving on to Florida Atlantic and former Washington and Southern Cal head coach Steve Sarkisian calling plays?

Clemson has a recent history of something similar happening – Chad Morris was hired at SMU in December of 2014 and Clemson head coach Dabo Swinney promoted Tony Elliott and Jeff Scott to co-offensive coordinator. The move worked as the Tigers routed Oklahoma in the Russell Athletic Bowl. The offense not only hummed right along, but quarterback Cole Stoudt had the game of his career.

However, that staff had almost a month to work out the kinks and get everyone used to their new jobs. Elliott and Scott stayed with their position groups, and not a lot changed except Elliott moved to the box on game day and called plays. Sarkisian has been an offensive analyst and can’t coach players on the field. Everything changes for Sarkisian, and he has just a week to get comfortable with his new role.

The only time I can remember something similar to this – losing an offensive coordinator before the National Championship – was when David Cutcliffe left Tennessee to become the head coach at Ole Miss at the end of the 1998 season. The Vols didn’t miss Cutcliffe and went on to beat Florida St. 23-16 in the first BCS National Championship. Again, however, the Vols had weeks to prepare, not just seven days.

Sarkisian is known as a dynamic play caller but gave up his play-calling duties at Southern Cal, giving them to the man who replaced him as head coach in Clay Helton. Sarkisian was later let go as his struggles with alcohol were well-documented.

Kiffin is familiar with Clemson defensive coordinator Brent Venables after last season, so that level of comfort and rhythm are now gone. However, during last Saturday’s win over Washington in the Peach Bowl, the Crimson Tide came out with a lot of shifts and movements and the offense struggled. Late in the game, the offense leaned on running back Bo Scarbrough and therein lies what we expect to happen next Monday.

Alabama head coach Nick Saban has expressed his displeasure with Kiffin more than once the last two years, and it’s no secret that Saban doesn’t like to be cute on offense, he doesn’t like to trick the defense and he doesn’t want to be finesse. Saban wants to line up and run the ball with his patented inside zone, control the clock and wear opponents down while relying on his defense.

Sure, there will be a little uncertainty from Clemson’s perspective, and the coaches will certainly look at the film from Sark’s days out west. But Sarkisian and Saban will want to run Scarbrough at least 30 times and give freshman quarterback Jalen Hurts a fighting chance by making the play-action pass effective. If Scarbrough is effective up the middle, Hurts can run the zone read and scoot outside for big plays.