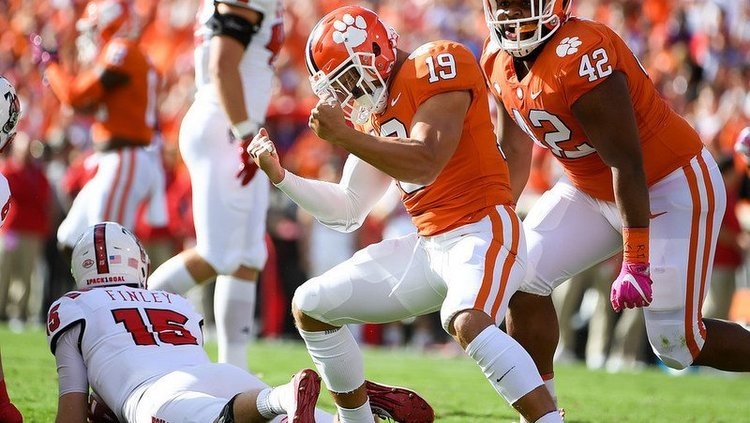 CLEMSON – It’s the Textile Bowl and anything can happen.

Clemson and NC State square off at 7:30 pm Saturday night (ABC) in a series that has seen Clemson win seven in a row and 14 out of the last 15. However, it’s not always easy for the Tigers at Carter-Finley Stadium.

"It's always a challenge to go up to Raleigh. It's never easy up there. It has been a grind,” head coach Dabo Swinney said during his weekly press conference. “Dave Doeren is a great coach, it's a well-coached team. They have had a lot of injuries this year, but this is a tough, physical team. They scheme as good as anybody we play year-in and year-out. It's really a tough task to play there. Their crowd, they show up. It's a tough environment.”

Swinney said anything can happen in Raleigh, especially with a trophy at stake.

“It's the Textile Bowl. It goes way back. There's a trophy getting handed out after this game. I guess we'll load it up and take it up there,” Swinney said. “I assume (equipment manager) Abe Reed or someone will get it and take it up there with us. It's the history. N.C. State has been really good. Goodness, they've had some players, a bunch of really good players. I think Dave and them do a great job. They're a well-coached team. They play tough, physical and it's a team that is dangerous. They are unpredictable. They're young. We have to play well and be locked in. It's also a tough place to play."

The Wolfpack have faced a ton of injuries this season, but Swinney said the offense still presents problems.

"Offensively, they have had some transition at quarterback. I assume their freshman will be the guy there. They'll also do some wildcat stuff,” he said. “Their offensive line is the strength of their offense. Schematically, the shifts and motions and creating tips and mismatches, that's going to be a challenge. They're a big stretch team. They're also eighth in the country in punt return. They have some young guys at wideout. They're a team that will continue to improve.

"We are going to have to do a great job of communicating and picking up their pressures. They're going to pressure. They don't sit back. They are going to attack you and challenge you. They're going to bring pressure almost 50-percent of the time. They force you to make plays. We did not run the ball well on them last year. We were about 2.9 a carry. We have to improve in that area in this game. They're good up front, too."

Clemson can earn a 10th win with a victory over the Pack.

“For us, going up there, it's about execution. We're excited to be 9-0. We want to get that 10th win,” he said. “We want to win our division. If we do that, little things lead to big things. If you win the division trophy, you get a chance to win a bigger trophy.”