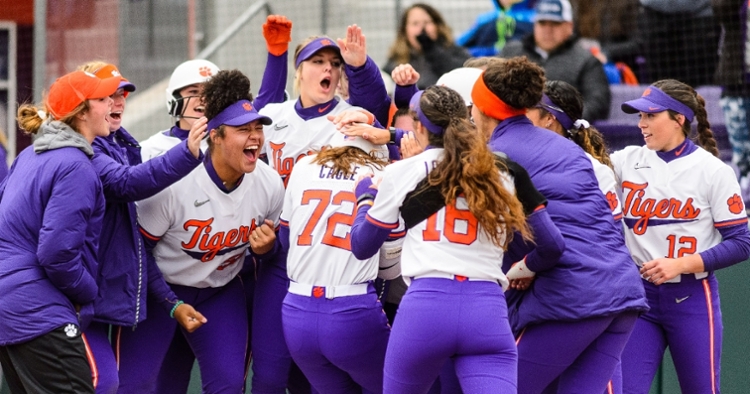 Cagle posted double-digit RBIs and strikeouts for the series. (Photo by David Grooms)

Cagle, who started in the circle and hit third in the lineup, hit the first pitch she saw over the left-centerfield wall to put Clemson up 2-0.

Guimbarda then stepped to the plate two batters later for a solo shot to right-centerfield for her fourth-straight game with a home run (tying Cagle for the team-lead of five on the season).

After Clemson chased Spartans starter Leah Shipp in the top of the second, junior left fielder Grace Mattimore lined an RBI double to right field to push the Clemson lead to 4-0.

Trouble struck in the third inning for the Tigers, with a series of Michigan State grounders giving the Clemson infield trouble. The Spartans would bring across three runs on three hits and three errors with only one ball leaving the infield.

Cagle saw her day done in the fifth after the first two batters reached for Michigan State and was tagged with her first earned run after freshman Logan Caymol hit a pair of Spartans to bring in the tying run. Caymol wouldn't allow a hit over her three innings to notch a fifth win in the young season (5-1).

Clemson got its winning rally going in the sixth on an odd play where the Spartans second baseman dropped the ball on an infield-fly with two on, the runners moved up and a tag wasn’t applied to the runners moving up instead of a force-play attempted. Cagle was intentionally walked next and senior MK Bonamy’s grounder was mishandled at first to allow the go-ahead runs. Guimbarda then registered a two-RBI double to add some insurance.

"That was the pitch I like. When I found it, I thought 'get it and hit it hard,'" Guimbarda said. "Just excited for my team. It was definitely a team win today...Logan did great on the mound...It's a great feeling to win together. Every day we're making history. Keep the streak going."

"We got a little comfortable and had a bad inning defensively behind Cagle," Tigers coach John Rittman said. "They came back and tied the game but this team has been fighting back all year long. It showed again today. Even though we got down, there was no quit and we came back and put four more on the board and got the win. Anytime you can sweep a weekend, it's a great weekend."

The day capped a big first home week for the Tigers.

After getting shut out in the home opener Wednesday versus Western Carolina, the Tigers bounced back to split the doubleheader and win three more going into Sunday’s contest. They outscored their foes 36-4 in that stretch.

That was certainly boosted by an early high-water mark for the program in runs scored with a 21-2 win over Maryland on Saturday. After a closer affair Friday to open the Big Ten/ACC Challenge (a 5-1 win over Maryland), Clemson jumped all over the Terps’ pitching in game two, going through the lineup twice in a 14-run second inning that featured two grand slams.

Guimbarda kept the winning streak going Saturday night with the go-ahead, two-run homer to rally the Tigers past the Spartans in the sixth inning for a 2-1 win.

"I just keep learning every time this team plays that this team fights," Guimbarda said. "No matter the count or how many runs we have, the team knows we can fight and we're going to come up in a big situation."

Cagle finished the weekend with 10 RBIs and three home runs from the lineup and 13 strikeouts and a complete-game win from the circle. Guimbarda went 2-for-4 with three RBIs on Sunday to tally nine RBIs for the weekend and four home runs.

Caymol made three appearances and notched three wins in the tournament, logging a 0.54 ERA over 13 innings. She also made her first two college plate appearances in relief Sunday, which drew some attention from teammates as they were her first since middle school, she said. Her team got louder when she made it to first base on a dropped strike three.

"It was fun. I was glad to get the team fired up," Caymol said. "They (her teammates) were just telling me to be focused and take hacks."

Rittman said he called Caymol's bluff on being a hitter.

"I said, 'Listen, you've talked to me all year about hitting,'" Rittman said. "We just tried to relax her and tell her she's got to hit right now. Valerie had to come out out of the game...Logan came in and gave us two pretty good at-bats. The second at-bat she actually swung the bat and looked pretty good. That was big for us."

Clemson heads to Greensboro next to face UNCG Tuesday for the first in six-straight road games.

???? Valerie Cagle gets us on the board with a two-run shot to left-center field. That's her fifth homer of the season!!

After Cagle's two-run shot two batters prior, Marissa Guimbarda homers to right center to tally her fifth HR of the season!

???? Grace Mattimore sends a shot into the right-center field gap, scoring Carlee Shannon in the top of the second. That is Grace's fourth double on the season in just 17 at bats.

Shannon crosses the plate for the fifth time this season.

?? MK Bonamy puts the ball in play and a Spartan error allows JoJo Hyatt and Cammy Pereira to score, giving us a 6-4 lead. ??

????? GUIMBARDA GETS ANOTHER HIT TO SCORE CAGLE AND BONAMY??